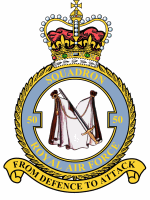 Vice President of 50 and 61 Squadrons Association. 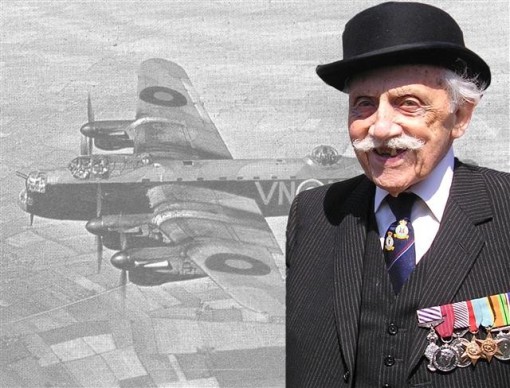 Born on 24th May 1913. Empire Day. He joined the RAF in 1938. His reason for volunteering was the offer of pilot training by the RAF and the King's shilling. His initial pilot training was on Majestic's at the Tollerton flying club. From there it was to the London area for training on Tiger Moth's.

In January 1941 he joined 49 squadron at Scampton as a sergeant pilot for his lst tour of operations. Flying Hampden bombers.

83 squadron was also stationed at Scampton.

Daylight 0ps were the norm at that time. On one particular mission his aircraft was so badly damaged that whilst returning home it began to lose power and height whilst still over Holland, Another Hampden flying close by was piloted by an 83 Squadron friend Sgt Stubbs, later to become a Wing Commander Master Bomber, who saw what was happening and, having spotted a Dutch airfield, albeit in German control, radioed his idea to Jimmie Flint, "Jimmie, land on that Dutch airfield below. We will come in behind you and pick you up."

And with that both aircraft flew low over the airfield with all guns blazing. Having given the resident Germans a very unpleasant shock, sergeants Flint and Stubbs pulled their aircraft up and away from the airfield and headed out over the North Sea; one of Jimmie's Hampden engine's was running at full speed preventing him from landing on the airfield, so putting an end to the plan. With the Hampden once again losing height as they flew over the North Sea he used great skill to nurse the ailing aircraft to the safety of England where he was forced to crash land in a field. Shortly after scrambling out of the wrecked Hampden they were met by a local farmer's wife carrying a tray on which she had prepared breakfast for them.

....................."After the memorial service in June 2000 I was talking to a fellow veteran when W/C Flint stopped to have a chat with us. After Jimmie left us we reminisced about the 2nd World War. He went on to say that he served on 83 Squadron early in the war and that his pilot was Wing Commander Stubbs; Master Bomber on several of my operations, he then related the above incident to me after-which he laughingly said "Jerry must have thought that we were conducting our own little war.".......(James Flowers)

Not long after this incident, Sgt Flint's aircraft was once again badly damaged by two enemy fighters, with an engine cut he was unable to keep the Hampden in the air so, near the English coast, he ditched it in the North Sea. As he clambered out onto the aircraft wing to join other members of his crew he saw his WOP sitting near the dingy, unfortunately the dingy was full of bullet holes. "Where’s Benny" (the navigator) he asked, they didn't know so without hesitation Flint clambered back into the rapidly sinking aircraft. He found the unconscious navigator still in his navigator's position underneath the pilot's seat. Struggling against water which was now flowing into the fuselage and the weight of the injured man, he nevertheless managed to free, and drag him to the escape hatch. The Hampden was already completely awash and it's tail was lifting into the air as it began to slip out of sight. Quickly Jimmie dragged the navigator into the sea and, despite both airmen having full flying gear on he swan to the nearby coastline dragging his comrade with him. Unfortunately the condition of the injured navigator rapidly deteriorated and he lost his fight for life. Sergeant Flint had done everything he could to save his navigator, including risking his own life, but the airmans injuries from the flak had just been too gret to withstand the ordeal. For his actions that day Jimmy Flint was awarded the George Medal.

One night in July 1941, this airman was captain and pilot of an aircraft which was attacked by two enemy aircraft whilst over the sea about 50 miles from the English Coast. As a result of the damage sustained, Sergeant Flint was later compelled to descend on the water 800 yards from the shore. The wireless operator and air gunner were able to leave the aircraft but there was no sign of the navigator. Sergeant Flint was unable to open the astro hatch so he lowered the back of the pilot's seat, crawled through the aperture, and found the navigator, who had been badly wounded, helpless behind a spar where he had fallen. The aircraft was fast sinking but Sergeant Flint managed to drag the navigator out through the pilot's hatch. The dinghy had been punctured and, being only partially inflated, sunk at once with the aircraft. The air gunner, though wounded, swam towards the shore and Sergeant Flint, at first assisted by the wireless operator until his wounds prevented him from continuing, supported the helpless navigator until they were within 50 yards of the shore where a soldier who had come out to render assistance relieved him. Sergeant Flint then swam to the shore where, after seeing both the wireless operator and navigator safe and finding no sign of the air gunner, he asked for boats to be sent out to search for the missing man, at the same time giving clear instructions where to look for him. He would not leave the beach until he had seen that boats were searching for air gunner who, it was subsequently found, must have succumbed to his wounds shortly after striking out for the shore. Sergeant Flint then walked for over a mile to a waiting ambulance and was taken to hospital. This airman displayed great gallantry and disregard for personal safety in his efforts to save the helpless navigator who, unfortunately, has since died of his wounds. 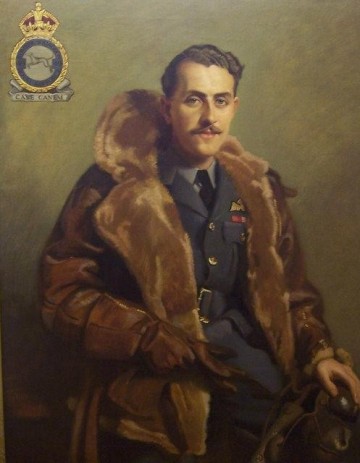 Copy of the portrait of Jimmy Flint which hangs in the RAF Scampton Museum.

Following his tour with 49 Squadron, Flint's tour ended in September 1941 and he was rested from flight operations serving on the ground as an airfield controller. He was a flight sergeant when he was offered a commission for the second time. Having accepted, he was commissioned on 1 May 1942 into the General Duties branch of the Royal Air Force Volunteer Reserve as a pilot officer (emergency). He spent the next two years at a bomber training unit as an instructor. He was promoted to flying officer (war substantive) on 1 November 1942. He was promoted flight lieutenant on 12 November 1942. In 1944, he converted to the Lancaster Bomber at No.5 Lancaster Finishing School.

His next operations were; (All with the same crew)

26 March 1945. W/Cdr J Flint ceased to be attached to R.AF. Metheringham on completion of  5 Group Flight Commanders Course No.8.

May 1945. Several Exodus operations were carried out but ORB's do not give details of crews.

15 June 1945. In accordance with instructions previously received from H.Q.B.C. All personnel (95 Officers and 134 N.C.O's) Moved fro R.A.F Station Skellingthorpe to R.A.F Station Sturgate, together with aircraft and necessary equipment. 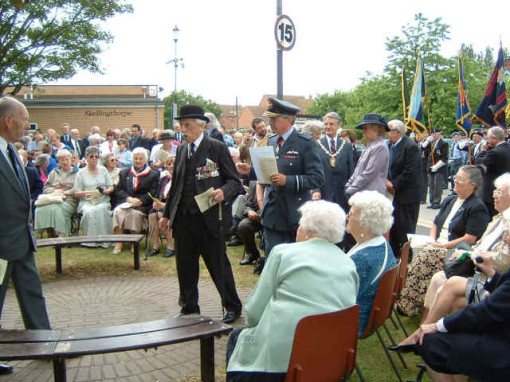 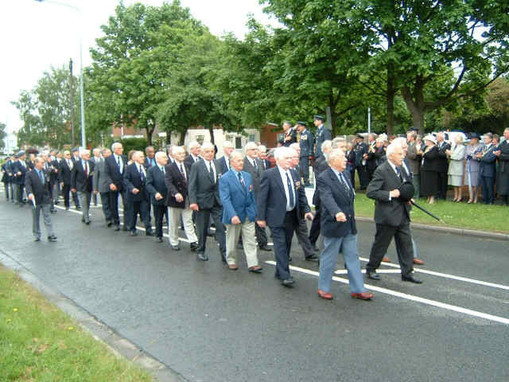 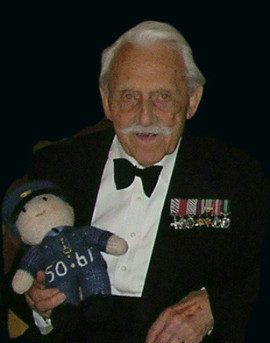 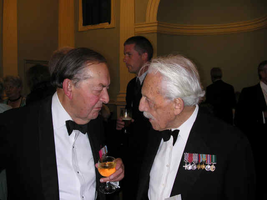 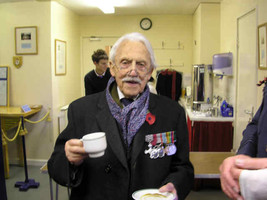 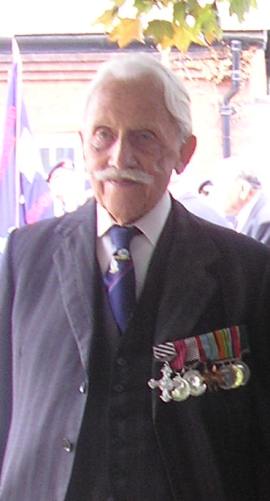 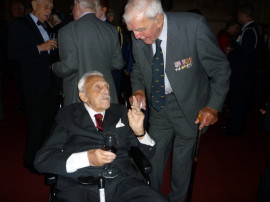 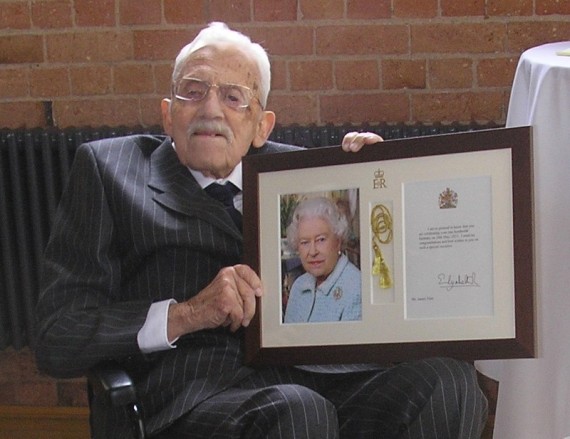 Nephew, Bill Flint and Jimmy proudly display his mesage from the Queen. 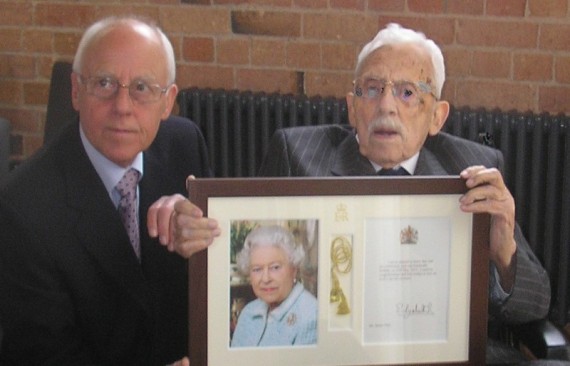 Jimmy surrounded by his family. 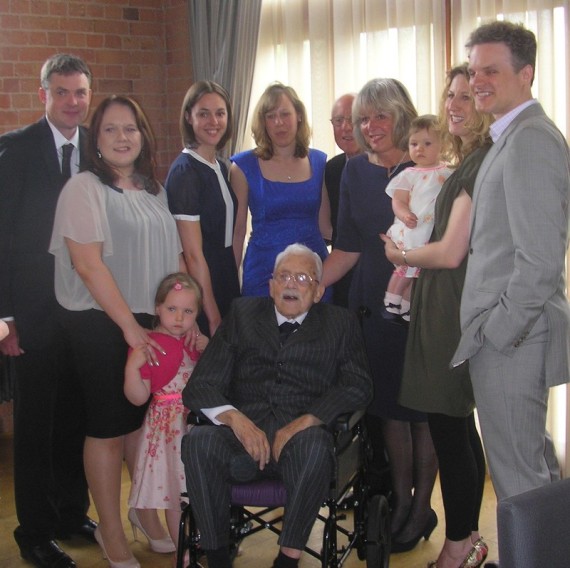 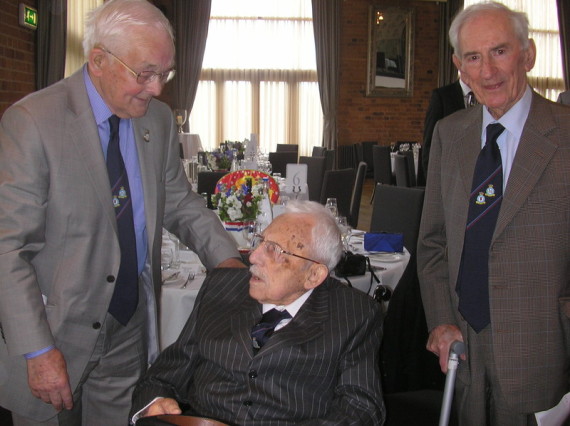 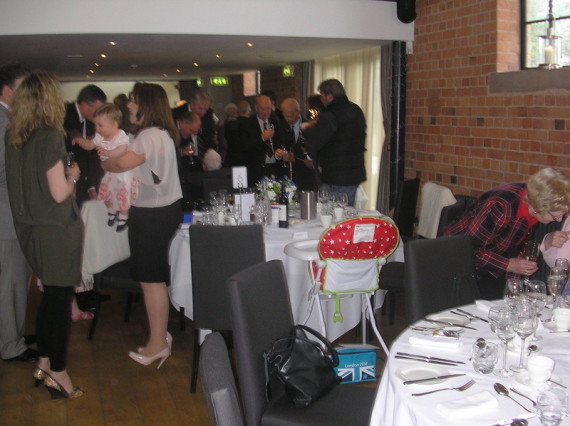 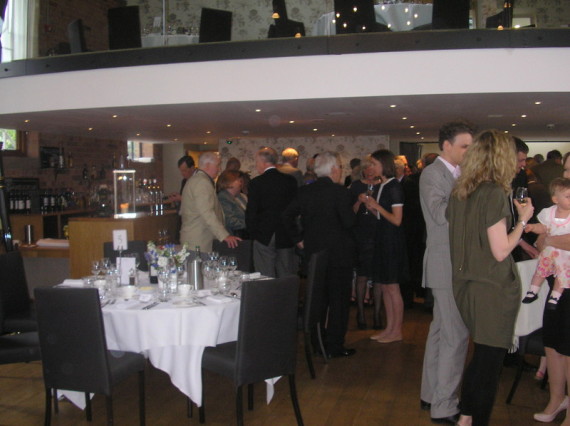 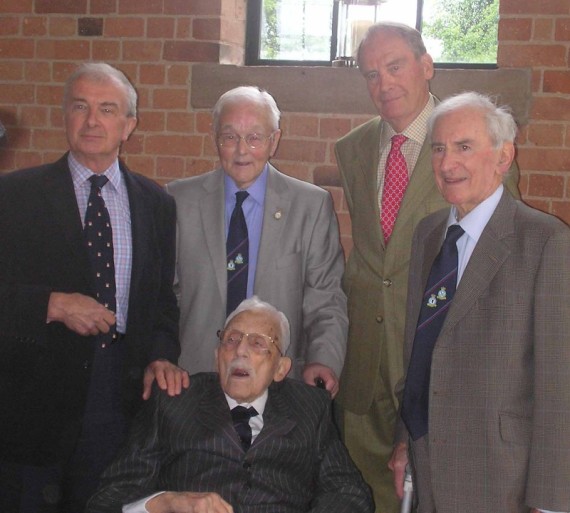 Bob Hayward, a 61 Squadron Veteran, with Eric Clarke, a  49 Squadron Signals (later WOP) veteran who served on 49 at the same time as Jimmy. 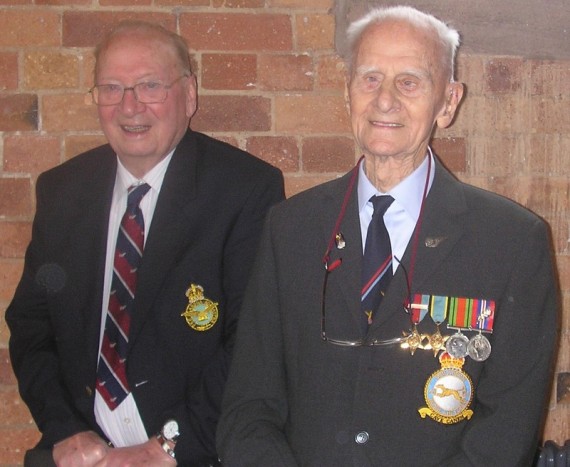 Cutting of the cake. 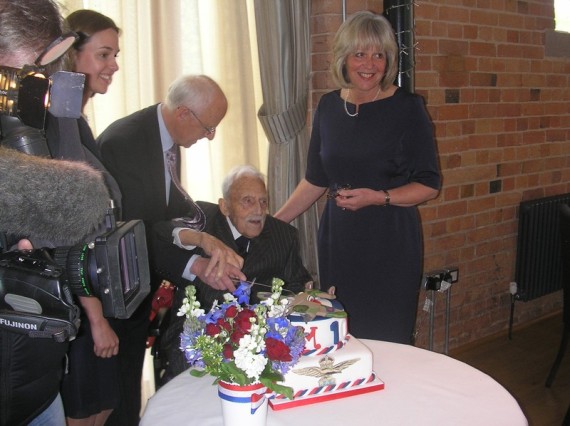 Still got some puff left. Only a little mind you. 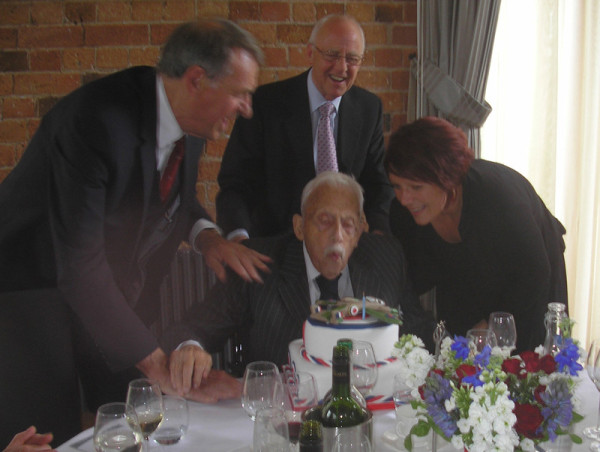 THE END OF A PERFECT DAY.

We are sad to report the passing of Jimmy Flint on 16th December 2013 aged 100.
The funeral service was held on Friday 10 January 2014 at at Holy Rood Church, Village Street, Edwalton, NG12 4AB
followed by private cremation.

I was, along with many others, pleased to be there  on the 10th to pay my  last respects to this fine old English gentleman.

He was my 50 Squadron Commanding Officer during 1945. Despite it being a sad occasion the fact is that he had a very long, exciting memorable life.

I'm certain that this brave, wonderful man will be remembered for ever by many.