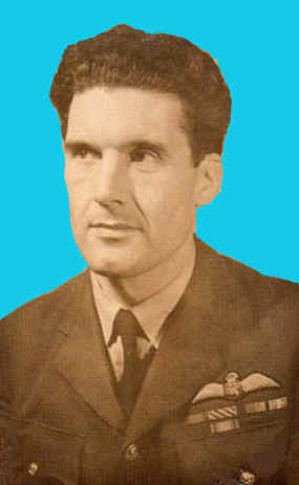 Born at Newport, Monmouthshire 4th April 1914, son of Police Inspector Charles Nash Stenner of Newport Borough Police. His mother was Annie Stenner, nee Darwen of Workington. He was the oldest of three brothers and one sister. His brother Douglas was killed in 1940 on HMS Glorious, he was Yeoman of Signals.Humphrey, his other brother, was also killed in 1955 when his RAF Provost collided with another over Chippenham.

Charles attended what was then known as The Newport Secondary School for Boys.

In 1931 he left school to go to RAF Hendon, Trenchards Brats, 21st intake, where he did an airframe and engineering course. On leaving Hendon he was posted to Irag servicing RAF planes. Keen on flying he managed to scrounge many flights. His first training flight was on the 15th July 1936 in a Bristol F2B, registration G-ACLO, which is a civilian registration, as he was in the RAF at that time this would suggest that civilian instuctors were then being used by the RAF for initial pilot training.

He was presented with his pilot's wings in 1937.

During Flying training he flew Hind and Hart aircraft

On the 25th of May 1937 he was posted to 50 Squadron at Waddington, some three years and four months later, on 26th September 1940, he was posted from 50 squadron to Training Command.

His bomber pilot training was carried out on squadron.

The first Hampdens L4064's arrived on 50 squadron mid- January 1939, followed by L4076, L4078 and then  L4080. He told his son Lester that when he learnt to fly Hampdens the instructor stood behind the pilot's seat to give  instructions, however, because of the narrowness of the aircraft and limited space the instructor could do little else. If the trainee pilot became incapacitated for any reason it was very difficult to get him out of his seat. .....On one occasion a trainee pilot was injured during a training flight. Wing Commander Walter George Gardiner the instructor. Gardiner had to break the back of the pilot's seat to remove the injured pilot from it, while this was being done the bomb aimer tried to fly the aircraft by leaning up through the floor position.

Wg Cdr Gardiner was awarded the DFC for getting the injured pilot out of the seat and over the mobile toilet so that he could fly the aircraft back to base.....Stenner's instructor on Hampdens was a Fl Lt Robert Cosgrove, 39456, the son of The Hon Robert Cosgrove, Premier of Tasmania.

On the 14th April 40 he laid mines "East Denmark", apparently this was the first mine laying operation by 50 squadron during WW11.

Below: 1940. RAF Lindholme. 50 Squadron. Stenner is seated third from the left in the 2nd row. 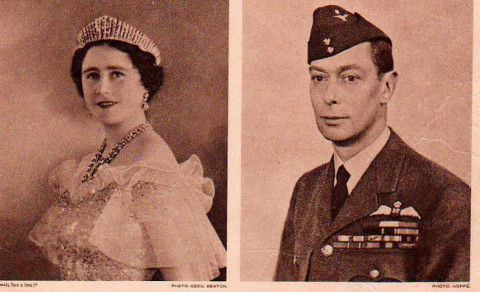 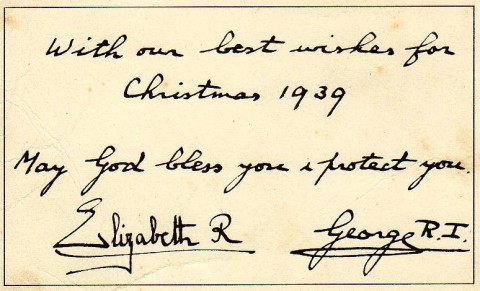 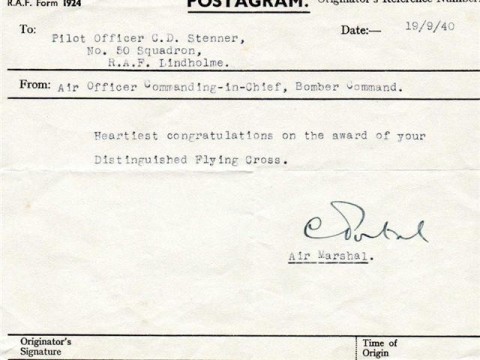 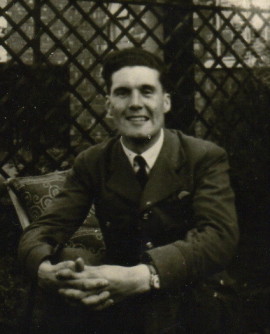 26th Sept 1940. After serving for three years and four months on 50 squadron, he was released from operational duties.

He told his son Lester that he spent more time with 50 squadron than any other and that his happiest time in the RAF was with 50 at Waddington.

His only regret was that he lost so many friends during the first three years of the war.

Below is a photo of a WW11 106 Squadron Hampden that Stenner flew,

After discharge from the RAF in 1947 he joined Airwork, as a Captain. His first job was to ferry three Vikings to Sorth America, via Recife.

Most of his Hampden flying was done with the same crew, P/O Alfred George Bake, 48692, Gunner/Radio operator, Flt Sgt William F. Horner, DFM x 2, 50466, Nav/Bomb aimer, and Ft Sgt Leonard J. Maidment DFM, 35740, also Nav/Bomb aimer, who lived for a number of years in a retirement home in Southampton. He passed away during 2007.

They flew at least 30 missions together, however as Stenner stopped recording crew names in his log book they could have been together on 50 of his missions.

Whilst serving on 106 Conversion Flight he took part in three sorties flying Manchesters and one in a Lancaster.

The three sorties in Manchesters were:

During another raid on Cologne his aircraft was badly damaged by a German night fighter. With bullet holes in the tail and rear sections plus one engine shot up he managed to get his aircraft back to the UK, landing it on one engine.

Apart from this little bit of bother he felt that he led a charmed life !!!

On the 2nd of June 1942 for some reason he was detailed to do a job whilst most of his crew joined Fl Lt Alan J. Worswick DFC of 106 on a trip to Essen, they were shot down, all the crew lost their lives. Hodge's also did not make this trip.

This was the first loss of a Lancaster by 106.

He spent some time Test Flying Lancasters with the "knuckle undercarriage".

On one occasion just after he landed his Lancaster the rear gun turret fell off onto the runway, fortunately the rear gunner escaped injury, however, he was rather shocked at being dumped so unceremoniously onto the tarmac!!

Strictly against the rules he flew a Spitfire from Swinderby to Waddington with his 2 year old son as a passenger. Lucky Boy !!!.

During WW11 he flew 33 different aircraft.

Copy of Distinquished Service Order Citation- as per London Gazette:

Confirmed as Squadron Leader. 1 May 1943. Citation from Public Record Office

The performance of his ground duties is beyond reproach. He is an outstanding figure in the squadron and an inspiring one." 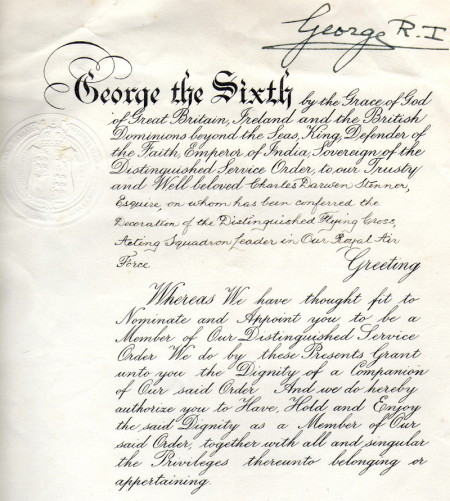 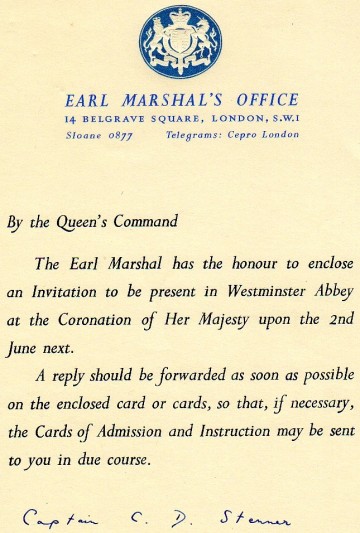 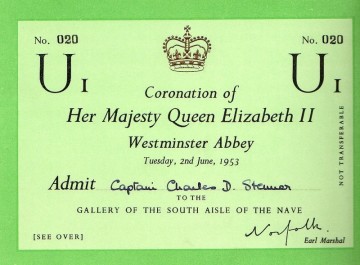 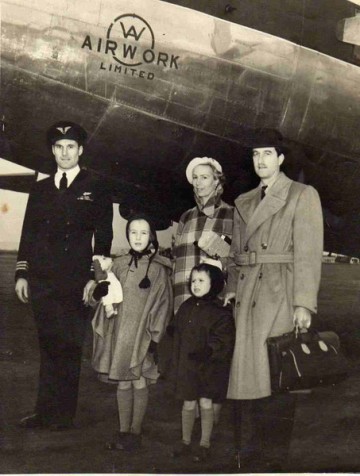 1947.Captain Stenner with the new Ambassader to Abysinnia and family after flying

He was one of the first pilots to fly with Ghana Airways after it was set up in the early sixties. They flew Britannia's.

He then moved to Caledonian also flying Britannia's.

His final job was with Donaldson International, again flying Britannia's. 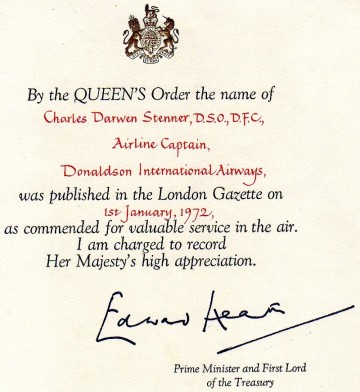 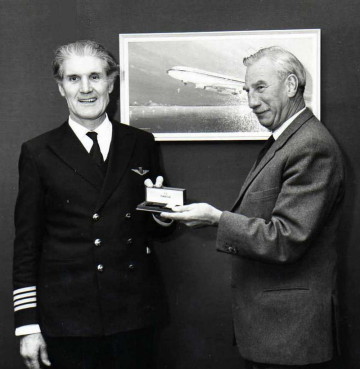 Above: 1972. Captain Stenner receiving the award

"Commendation for Valuable Service in the Air".

The picture below is of the last aircraft that 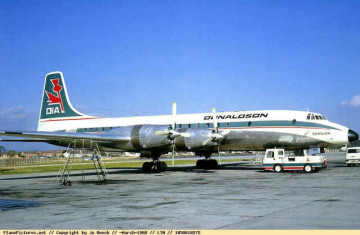 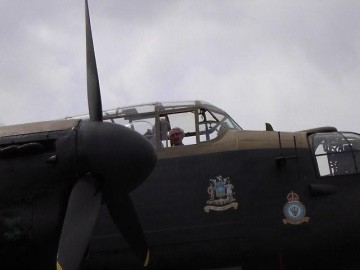 In the cockpit of Just Jane at East Kirkby Aviation Heritage Centre. 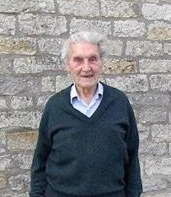 Charles seen  outside his home on his 90th birthday and in "Just Jane" at the East Kirkby Aviation Heritage Centre.

Wing Commander Charles Darwen Stenner DSO DFC served with distinction in the RAF for 16 years from 1931 to 1947, spending more time on active service with Bomber Command during WW11 than any other pilot I have ever known,

and then a further 36 years Captaining civilian aircraft for a number of different operators, finally retiring in 1973. By then he had flown more than a million miles during 23,500 hours of flying, 9,000 of which were on Britannia's.