SADLY BECAUSE OF THE CURRENT CORONAVIRUS SITUATION THE REUNION WEEKEND AND AGM HAS BEEN POSTPONED. 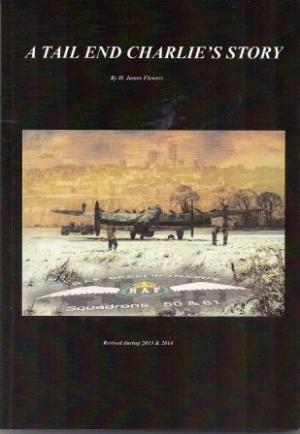 THE EXPERIENCES OF AN AIRCREW REAR GUNNER WHO SERVED IN THE RAF DURING THE 1939-45 WAR AGAINST GERMANY AND ITS AXIS POWERS.

Our original web site author, James Flowers has revised and re-issued his story of life as a Rear Gunner on 50 Squadron.

All the proceeds from the sale of the book are being donated to the International Bomber Command Centre appeal.

James has donated a quantity of his books to the Centre on-line shop for sale and copies can be purchased via the International Bomber Command Centre web site at  http://internationalbcc.co.uk/shop/a-tail-end-charlies-story/ 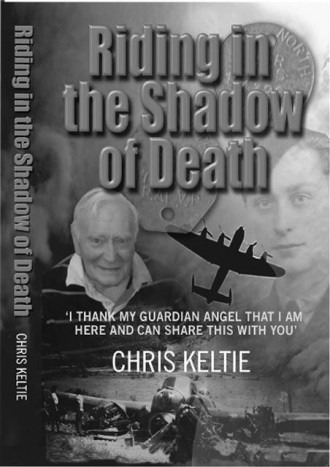 This book "Riding in the shadow of death" by Chris Keltie tells the story of Flight Leiutenant Bill North. An amazing story of bravery.

Chris has kindly donated copies of his book to the International Bomber Command Centre shop, from where you can buy a copy. The proceeds from the sale going to the Memorial fund. 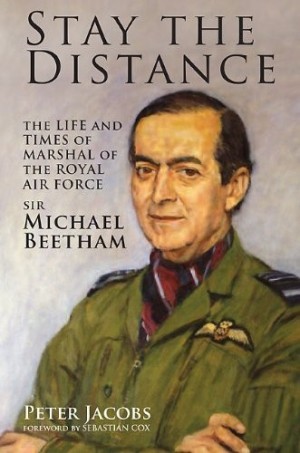 Sir Michael Beetham enjoyed a long and distinguished career in the Royal Air Force. He joined the RAF as a pilot in 1941 and was awarded the DFC whilst serving with Bomber Command during 1943/44. Remaining in the post-war RAF, a number of flying and staff appointments followed. Notably he drafted the first specification for the ill-fated TSR 2 and later joined the V-Force as commanding officer of 214 Sqn at Marham. Beetham then served at the heart of Bomber Command's affairs when the V-Force was at the forefront of the Nation's defences. The most critical moment came with the Cuban Missile Crisis in 1962. In 1964 he was given command of Khormaksar in Aden, the RAF s biggest overseas station. His arrival coincided with the start of a terrorist campaign against British forces in Aden. More senior appointments followed, notably as Commander 2nd Tactical Air Force and Commander-in-Chief RAF Germany, but the big prize came in 1977 when Beetham was appointed Chief of the Air Staff. In 1982 came the Argentine invasion of the Falkland Islands; as acting Chief of the Defence Staff, he was involved in the decision to send the Task Force to battle. After victory in the Falklands, Sir Michael Beetham handed over as CAS and was appointed Marshal of the Royal Air Force.﻿ 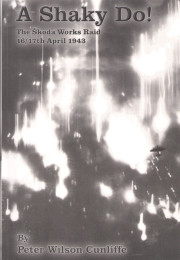 The author is a contract researcher and lecturer specialising in RAF Bomber Command operations.

This book descibes in amazing detail, the events of that fateful raid. It is written in a clear style and contains a wealth of information, records from both the RAF and the Luftwaffe are included as well as photographs and personal recollections from survivors. The fates of many of the lost aircraft have been painstakingly investigated and there are even some very amusing crew songs to lighten the tone. Recomended reading for anyone with an interest in the period. 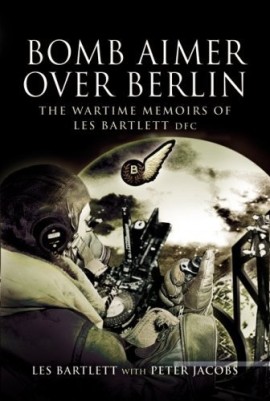 Les Bartlett has become one of the great characters of World War II history. He flew as bomb aimer with the then Flying Officer Michael Beetham, who later became Marshal of the Royal Air Force. At that time he was a sergeant but gained his commission in April 1944 and flew his tour, including 27 raids over Germany and France between November 1943 and May 1944. On his second operation his aircraft was attacked by a Ju 88, leaving it with no flaps or brakes - a crash landing at Wittering ensued. At the end of his third mission they found the whole of Lincolnshire fogbound and eventually landed at RAF Melbourne in Yorkshire just before that airfield was closed also because of the fog. His aircraft was hit in the wing by a 30lb incendiary bomb dropped by another Lancaster flying above them on his sixth operation - but they survived. On his twelfth operation to Leipzig he used the nose guns to destroy a Ju 88 night fighter, for which he was awarded the DFM. In February 1944 the port outer engine caught fire and the crew baled out. Les was then posted as Assistant Adjutant to RAF Thornaby.﻿ 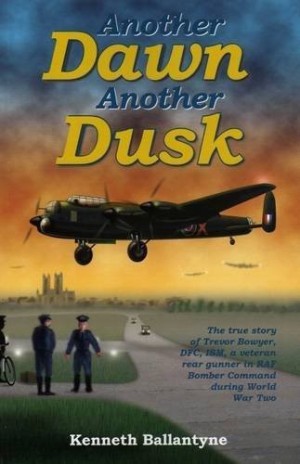 ANOTHER DAWN ANOTHER DUSK 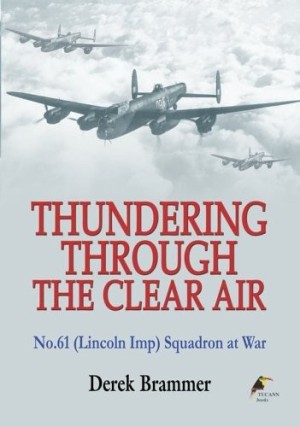 THUNDERING THROUGH THE CLEAR AIR is the history of RAF No.61 Squadron Bomber Command 1937-1945. It gives the reader an insight of what it was like to fly bombing operations against Germany during the 2nd World War.﻿ 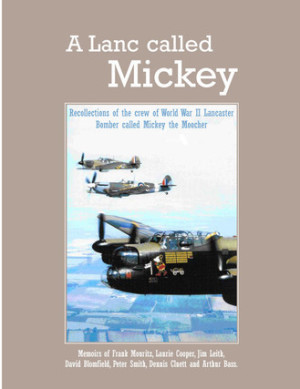 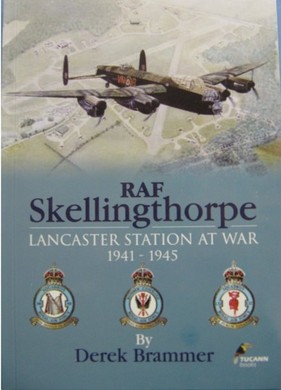 RAF Skellingthorpe was just one of the many primitive airfields that were built in Lincolnshire during the Second World War.

The Author has tried to give the reader an insight of what it was like to serve on this bomber station code named "Black Swan" between 1941-1945.

Derek Brammer was born in Lincoln in 1936 and developed an interest in aviation during the Second World War.

He took early retirement in 1991 and since then has researched and written books and articles about military aviation. 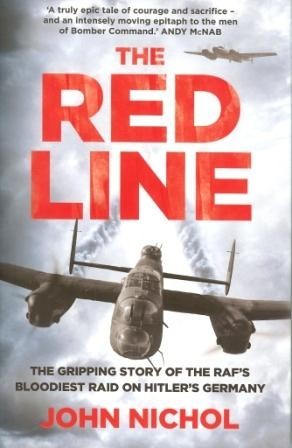 More men from Royal Air Force Bomber Command died on one single night of World War II than the total RAF losses during the whole of the four-month-long Battle of Britain.

This is the story of that night and the air raid intended to be the climax of Sir Arthur ‘Bomber’ Harris’s relentless campaign to defeat Nazi Germany. In The Red Line, we meet the young airmen who flew on the night of 30 March 1944. From fledgling bomber crews to the Luftwaffe pilots who tried to shoot them down and the innocent civilians on the ground, their testimonies are all here. . John Nichol has interviewed the few surviving veterans of that night, British and German, in the air and on the ground, to record the voices of a diminishing generation.

Nuremberg was the target. A centre for German industry, the city was also the iconic site of Hitler’s notorious pre-war rallies and the eponymous birthplace of his anti-Semitic laws. 795 aircraft set out that night, nearly 700 men did not return.

While these airmen were amongst the greatest heroes of the conflict, their contribution and sacrifice has, until recently, been side-lined in the face of post-war criticism of Bomber Command’s tactics. Yet they were among the best of their generation. Of the 125,000 airmen who served in Bomber Command, 55,573 lost their lives – one of the highest casualty rates of any military formation during the war. John Nichol’s dramatic tribute to the men who flew on the RAF’s bloodiest raid has provided the surviving veterans with the chance to tell the story of that terrible night – the night they flew to Nuremberg. 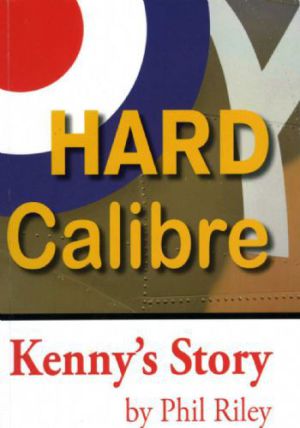 by Phil Riley (The Memoir Club)

Phil Riley worked on the night shift at Ross Foods with a bloke called Kenny Butterworth, who originally lived near Salford Cinema before moving toFolly Lane. Phil listened to Kenny's incredible Second World War stories night after night and promised to write them down for posterity. Kenny died but Phil delivered on his promise.

Everyone has a tall story to tell, tucked away somewhere in their ‘bag’of memories and Kenny was no exception but as we worked together he only ever got to tell me ‘snippets’ of the story. One week he mentioned some fights, another week he told me about aircraft crashes and a large flood in India. Yet another time he was living in luxury but then he was at deaths door with illness. After a while I tried to piece together the snippets and realised that if they were true, this man had cheated death so many times it was just amazing and so contrary to his unassuming appearance. In his late fifties with some remaining grey curly hair and about 5’ 7’’ yet not well built after a serious illness, the only thing that belied Kenny’s casual manner were his dark penetrating eyes. It was those eyes that had seen so much. As I pressed him harder he loosely gave me the ‘joined up’ version which basically covered his teen years and his service as an Armourer in the Royal Air Force. Indeed, just surviving to adulthood had been more luck than management due to the desire for occasional speed trials on motorcycles, which ended abruptly. Once he had joined up, the nature of the work and service requirements laid the field wide open and that is not overlooking the fact that aeroplanes don’t always keep flying. Although we were a generation apart, we had many things in common and became good friends to the extent that during one night shift I told him that he should get the whole story written down. He replied in his basic Lancashire accent “Ya might be right, but ahm not one for writing much” in a very matter of fact tone. It’s peculiar how naivety is only evident with hindsight. “Look.” I said, somewhat enthused. “I’ll write it for you.” He looked at me "You reckon?” “Yeh, sure” I replied. I’d taken a moment’s thought now “but I’ll have to ask you a lot of questions.” He thought a moment “Ah suppose so. Go on then.” So it was that on one night shift at Ross Foods Ltd. Westwick in the early hours of the morning I committed myself to an amount of work that I had previously thought incomprehensible. Over the next few months and years I frequently visited Kenny at his home where I asked questions and interviewed him then returned to my home and produced loads of notes about all he had said. This continued until the toll of lifes tribulations forced me to abandon the project which permanently scared my concience. When I was informed of his death some years later, I was truly grieved and the scar was freshly torn. When my wife and I went to Norwich and formed fifty percent of the mourners at his cremation, after his wife and  daughter, I had to address my inner torment. In some effort of self redemption for failing to keep my word, I resolved to fulfill my original promise to him, regardless of the time or cost by making an absolute commitment to myself this time, to write Kenny’s story.