For those who want to explore the remains of the Skellingthorpe Airfield or "aerodrome" we have created an interesting memorial trail that covers many points of the old airfield that still exsit, some opf which have been only recently found or uncovered. We are grateful for the help of The City of Lincoln Council for their help in developing this and supporting us in preserving what little is left of the former Skellingthorpe Airfield.

Thanks also go to Nick Grimshaw of NKDC for planning the route, which was done for their walking festival.

The trail starts with the former No.50 & No.61 Squadrons memorial and following a tour around the estate and woods of the old site (now a residential area called Birchwood) it finished back at the Birchwood Leisure centre where the memorabilia are displayed.

RAF Skellingthorpe opened in 1941 on a field previously called Black Moor, approximately 2.5 miles (4 km) south­east from the village of Skellingthorpe under the control of RAF Bomber Command. The airfield consisted of the standard pattern of three runways, with one Type B1 and two Type T2 hangars. Nissen huts were used for accommodation.

No. 50 Squadron RAF, equipped with Hampdens, was the first squadron based at Skellingthorpe, with the first detachment of personnel arriving shortly before the runways were complete. They were followed by No. 455 Squadron RAAF (also flying Hampdens), however this squadron moved to RAF Wigsley shortly afterwards.

The 50 Squadron Hampdens were replaced with Avro Manchesters in April 1942, then, in June 1942, Skellingthorpe was closed for runway extensions to cope with the Squadron's conversion to new Avro Lancaster aircraft. The squadron returned in October 1942.

In November 1943 a further bomber squadron, No. 61 Squadron RAF operating Avro Lancasters, arrived at Skellingthorpe, and remained until February 1944 after which it transferred to RAF Coningsby in order for accommodation to be built on the Doddington Road side of Skellingthorpe airfield. It then returned to RAF Skellingthorpe in April 1944 and remained there until the end of the war.

463 Squadron RAAF moved to RAF Skellingthorpe on 3 July 1945 with Lancaster Mks I and III from RAF Waddington.

During the war the tally of bombers lost or failed to return from Skellingthorpe reached 208:

In 1981, former Chief of the Air Staff, Marshal of the Royal Air Force Sir Michael Beetham, who had flown Lancasters from Skellingthorpe during the war, unveiled a memorial on the site to commemorate the 1,984 men killed flying from the airfield during the Second World War. 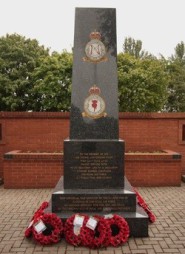 The Memorial at birchwood, outside the Leisure centre on Birchwood Avenue