Ken Ballantyne has allowed me to use material from his book

"ANOTHER DAWN ANOTHER DUSK" to record Trevor's story. 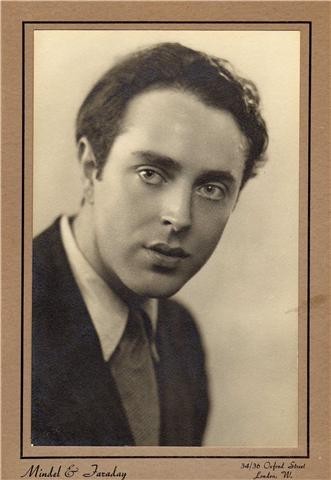 This portrait of Trevor Bowyer was taken in London in 1939 just before the outbreak of the war.

Warrant Officer Trevor John Bowyer, DFC, ISM
Born 11th January 1914 in the little Shropshire village of Atcham. His father, Harry Lot Bowyer, spent a lifetime working on the railways. After leaving school at the age of 14 he asked his father if he should follow in his footsteps by applying for a job on the railways. His reply was "Why", "When you are a bit older, you will be able to travel the world if you want to. More and more I see these aeroplanes flying about, You mark my words Trevor, that's where the future is, not the railways". How right he was, however it was many years before he became involved in flying matters.
On Wednesday, 30th May 1928 he entered the world of work as a part-time messenger with the General Post Office.
In due course he joined the North Western Travelling Post Office (TPO) team at Euston Station, London.
Years went by as he happily carried on working for the TPO.
WW11 was to change all that.
When the Luftwaffe bombed London during September 1940 twenty-three post offices were destroyed and every London railway station was put out of action. This made it personal for Trevor, he reacted by volunteering for aircrew duties with Bomber Command.
On Monday, 4th November 1940 he reported to the Air Crew Recruiting Centre in St John's Wood, London, for a pilot selection board interview. A Group Captain carried out the interview, near completion the Group Captain asked Trevor why he wanted to join the RAF. He remembered ending his reply with the words
"If any of us sat down and thought too much about the odds of survival, we would not go to war at all. I want to join the RAF and do what I can whilst we still have a country to call our own, sir."
Trevor joined the RAF Saturday 10th November 1940.
Initial training was completed at RAF Cardington followed by basic training at RAF Bridgenorth.
On Friday 24th January 1941 he reported to RAF Cranwell College at RAF Cranwell, to begin training as a pilot. Unfortunately slight colour blindness terminated his pilot training, however he was passed fit for other aircrew duties. As he had no desire to be a navigator, wireless operator , bomb aimer or flight engineer he left Cranwell to be an air gunner even though he had never owned or fired a gun in his life.
On  the 11th October he reported to the No.8 Air Gunnery School, RAF Evanton on the banks of the Cromarty Firth in the North East of Scotland, near Invergordon. Two days later he was promoted to the rank of Leading Aircraftsman. On completion of the course he was awarded his air gunner brevet and promoted to sergeant.
24th February 1942. Posted to  No.21 Operational Training Unit at RAF Moreton-in- the Marsh were he crewed up by self selection..
Whilst still at OTU at Moreton-in-Marsh he was attached to Bomber Command for the first two 1,000 bomber raids to Cologne and Essen as a rear gunner. Then followed his posting to No.70 Sqn at Abu Sueir, near Cairo.
Missions followed in rapid succession as the run up to the Battle of El Alemein increased the pressure on the Middle East Air Force. One night whilst attacking troop concentrations, his face mask was shot away by the cannon fire which shattered his turret. 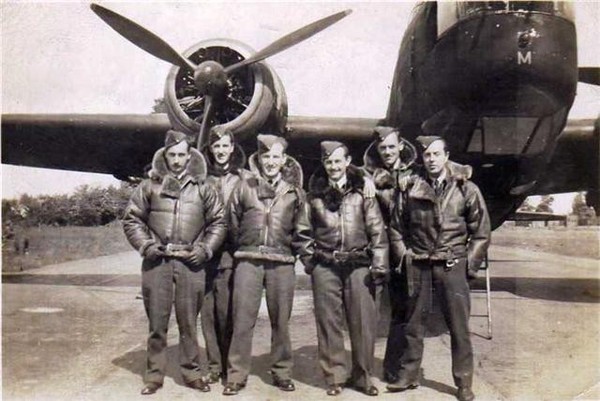 Tevor Bowyer (lst right) and crew infront of their 70 squadron Wellington.
Regular missions to Tobruk were known as 'the milk-run'. One night, just after releasing their bombs over the docks, their Wellington was hit and despite the best efforts of the crew, they crashed in the Qattara Depression. For the next three days and nights they walked back through enemy lines until picked up by the 11th Lancers. 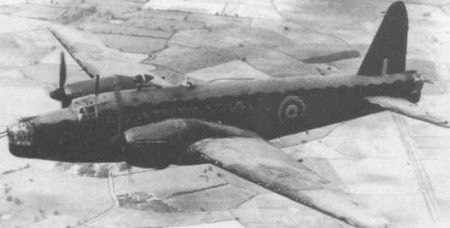 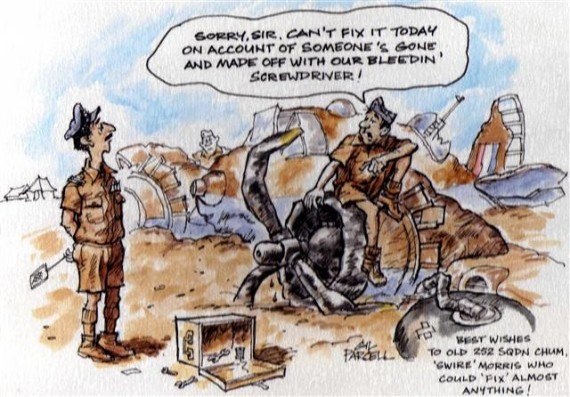 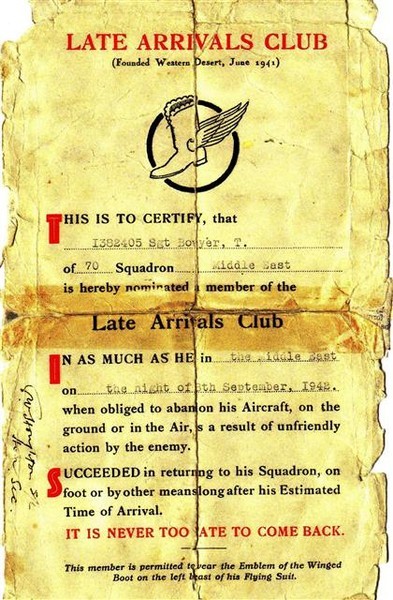 For most of their early missions the crew had no regular pilot, mainly being skippered by their CO, W/Cdr Wood. Eventually FO Elliott became their regular skipper. After 38 missions Trevor was declared tour expired and returned to Britain as an Instructor in Training Command. 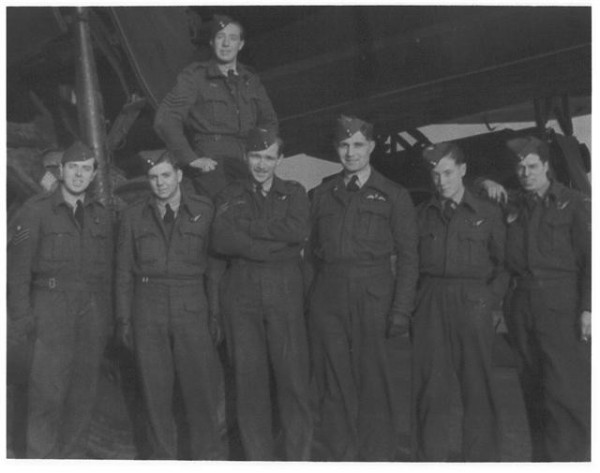 On Sunday 13th February 1944 he joined No.61 Sqn at RAF Coningsby.
As the other members of his crew where starting their first tour Trevor had to await them becoming operational. During this time he flew with several other crews including two missions as rear gunner with Flt. Lt. Bernard Fitch, DFC.
On arrival at RAF Coningsby for active duty with 61 Squadron Sgt Harraway Nav. was replaced on medical grounds. F/O Dickie Ward Nav. took his place. 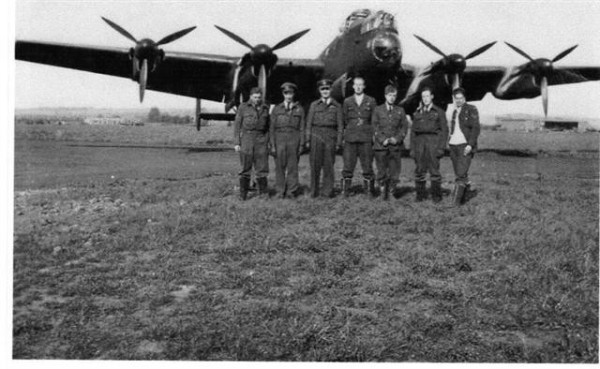 Trevor and crew with their faithful Lancaster QR-T at RAF Coningsby.

The first operation that he did with the F/Lt Acott crew was a trip to Stuttgart. QR-T was their aircraft. The raid was not a great success. The wind caused Pathfinder marking to fall back and most bombs fell in open country to the south-west of the city. When they got to the target the fighters were waiting for them and although Tommy was not attacked Trevor saw two other Lancasters go down. Nevertheless, all 61 squadron aircraft returned safely.
In three raids, Leipsig on 19th February, Berlin on 24th March and Nuremburg on 30th March 245 aircraft were lost over Europe, over 1700 airmen, most of whom never came home again. At Leipsig seventy-eight aircraft were lost, the worst losses on a mission in the war so far. At Berlin seventy-two aircraft were lost, surely it couldn't get any worse; at Nuremburg it did.
September 1944. After surviving 59 missions and two crash landings, WO Trevor Bowyer was awarded the DFC. 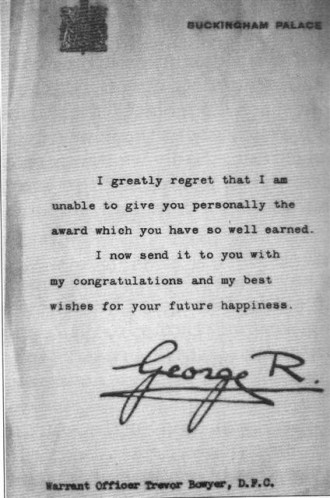 His second tour  was declared complete after he had completed twenty missions, he was then transferred back to instructor duties with Training Command. 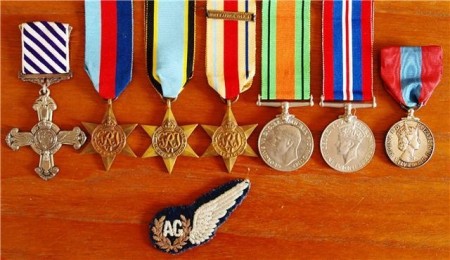