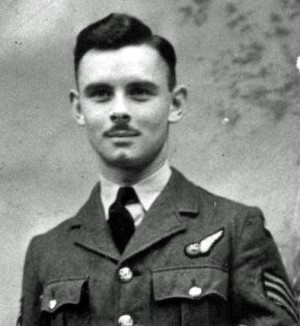 By Chris Manning and Family

John Manning was born in Hackney, East London, the youngest son of a Chief Petty Officer in the Royal Navy, and joined the RAF in 1943, at the age of 18, immediately volunteering for Aircrew.

After training in various parts of the country – and in various aircraft, including Wellingtons and Stirlings - he was posted to 61 Sqn as a Gunner.

Being a slightly-built young man, he of course found himself consigned to the rear turret of the Lancaster! He was mightily glad that he had missed the troublesome Manchesters!

He remained with 61, mainly at Skellingthorpe, until – after various ops – he was temporarily moved to 617 Sqn in 1945, although he saw no action with them. A spell in the Middle East followed, during which time he had his kit-bag stolen on a train near Cairo. It contained his Royal Warrant, Flying Log-Book, and several pairs of clean underpants, and was never seen again. Manning-Arabic relations have been somewhat slow to recover from this set – back!

Due to the loss of this log-book and his reluctance to talk about himself, the family is a bit sketchy on details, but he clearly loved the RAF, and 61 in particular. His CO was keen on him to take a Commission, but family and financial pressures made this impossible – something that frustrated him for the rest of his life. He left the RAF reluctantly in 1948.

Having moved from the south of England to the Borders, John settled in Wiltshire with his wife, Kate.

John Manning died peacefully in Salisbury Hospital after a series of illnesses, at the age of 86. He was witty, tough, charming, intelligent and difficult – in short, he was a character, and much-loved.

It is doubtful that we will see his like again.