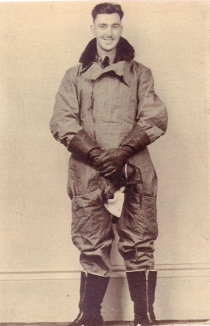 Don Watson was born in the small former fishing village of Cromarty in the Black Isle, Ross and Cromarty, Scotland. He was the first of six children born to his parents, WILLIE and INA WATSON (ROSEINA DOULL)and was born on his Mum's 21st birthday on 22 October 1920. Willie hailed from many generations of Cromarty fisherfolk while Ina arrived in the village from Wick, Caithness,in about 1915 with her parents, JAMES DOULL and stepmother, DOLINA DOULL (ROSS). James was a Joiner (Journeyman) to trade but had became an Innkeeper in Rose Street, Wick, a property which he owned although it was mortgaged. Anyway, the decision was made for the parents, along with Ina and sister Mary, to live in Cromarty while James helped repair and enlarge the Cromarty harbour during WWI.

Willie and Ina Watson settled as a family in Cromarty for the next eight years but the economic climate in the area was grim. Three of Willie's brothers had emigrated to South Africa, America and Australia, including his brother, George. DON, the eldest son, had already started attending the small local school where he was admitted on 1 September 1925. The school was right on the shoreline giving wonderful views of ships passing and nearby was the bustle of the harbour and the Royal Hotel. As a young child he must have revelled in the outdoor life here. Sadly, Willie died of Lobar Pneumonia on 7 April 1937 after a short illness. His fitness had always been a worry and he had been turned down for war service due to poor heath. Much of his job must have involved working out of doors and this may have aggravated his health problems. DON became the "Head of the family' at only 16 with two young brothers and three little sisters, a big responsibility. He was unable to remain at school or go on to University as money was short so he found work at a local Jute Mill as a Blockcutter and Designer, and attended evening classes to further his education. His ambition was to become a doctor and-letters to his fiancee, DULCIE WATCHMAN's mother, Iris, reveal his burning intention to educate himself to as high a level as was humanely possible. To this end every penny he was able to save was spent on books or banked for the future.

During 1937 and 1938 Don was a member of the Territorial Army and served with the Scottish Horse. He eventually volunteered for the Royal Air Force in 1941 and enlisted on 16th February. His enlistment form recommending him for Pilot/Observer. 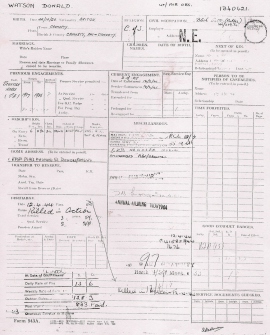 This copy of Don's service record shows him enlisting on 16th February 1941.

Following this he was sent to the Aircrew Reception Centre in London, this was around June/July 1941.

This was followed by a posting to No.10 Initial Training Wing, base at the Grand Hotel in Scarborough. His next stop was the No.1 Elmentary Air Observers School.

14th October 1941, Don then was sent to Canada for his aircrew training, probably by boat, (Quite often the "Queen Eliizabeth") finally arriving at No.31 RAF Personnel Depot at Moncton, New Brunswick. Then under the Arnold Scheme was sent to Montgomery Field in Montgomery Alabama. Don returned to the UK on 24th January 1942. 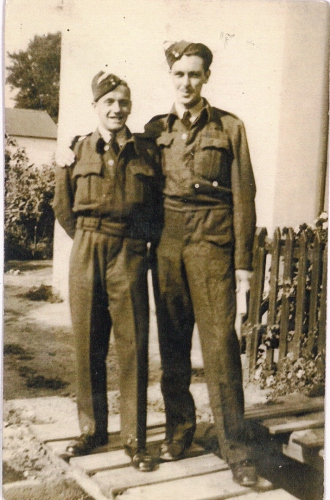 Don was eventually selected for Observer/Navigator training and following his training in Canada and America, was shipped to South Africa. Arriving there sometime in 1942 and was posted to No.48 Air School at Woodbridge, East London, in the Eastern Cape province. Here he would have undertaken elementary navigition training on Tiger Moth or Tutor aircraft.

It was while he was here that he met a young girl from the area, Dulcie Watcher, who he courted throughout his stay in South Africa. She met Donnie as she new him, in September 1942, and they saw each other as often as possible.

Don was then sent to Oudtshoorn, No.45 Air School for Observer traing in Oxford, Anson or Battle aircraft. This curtailed Don's meetings with Dulcie and they wrote to each other regularly.

Following his training Don left Cape Town by troopship for England. Shortly before leaving Dulcie and Donnie got engaged, with his promise to return and marry her after the war was over. In 2014 Don's family made contact with Dulcie who wrote to them with the story of her time with Donnie.

Click to download a transcript of Dulcie's letter to the family in 2014
Dulcies letter.doc
Microsoft Word document [28.0 KB] 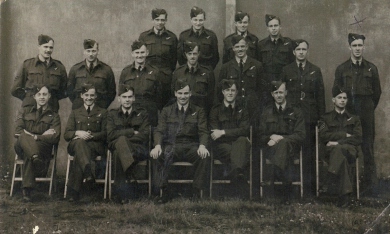 Following his return to the UK, Don was posted to RAF Dumfies. which was the No.10 (Observer) Advanced flying unit. Here he continued his training most likely in the Avro Anson.

His next stop was No.14 Operational Training unit at Market Harbourough, and then on to 51 Base at RAF Swinderby a heavy conversion unit, then 1654 Conversion Unit, but he was eventual sent to the No.5 Lancaster Finishing School at RAF Syerston. It was from here he was posted to 50 Squadron at RAF Skellingthorpe on 24th March 1944 (According to the squadron ORB). By this time the full crew had been made up, the crew being; 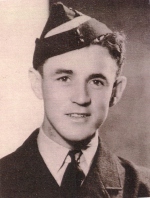 On the night of 24/25th March 1944 Pilot officer Skillen flew as second pilot with the crew of Pilot office D J Lundy in Lancaster III LM437. This was to give him experience of operational flying. (LM437 failed to return from a raid to Mailley-le-Camp on the night of 3/4th May 1944, The aircraft was flown by P.O. R Hanson and crew, all were killed).

Their first operation was on the night of 25/26th March 1944, this was on Lancaster III, LM394. The raid was to Aulnoye, Taking off at 19.18hrs and returning at 00.43 hrs. The pilots report states; "Primary target attacked at 21.47 hrs from 8,000 feet. There was no cloud, slight haze. Target identified by red and green T.I.s Bomber one red T.I. in sights. Cascading at 21.44 hrs. An explosion was seen at 22.03 hrs. About 20 bomb bursts were seen around the T.I. which were concentrated. Fires could be seen after leaving target. Blackout bad all over France, especially around St Quentin. Visual Monica and A.P.I. carried out. Sortie(1/3) completed." (Sadly LM394 was lost 5 days later on a raid to Nurnberg, being flown by Fl Lt M.U. Robinson and his crew, all were killed).

Having thrown them straight into the fray, they then had a break until the night of 30/31 March 1944, flying Lancaster III LM840. This raid was to Nurnberg, taking off at 22.04 hrs and returning at 05.54 hrs. The pilots report states; "Primary target attacke at 01.30 hrs from 22,500 feet, 2/10ths cloud at 6-10,000 feet. Target identified by red T.I.s and wanganui flares red with yellow stars. Bombed centre of red T.Is, not seen to cascade. Several fires were seen, chiefly to N.E. of target, but they were well concentrated. Monica & A.P.I. carreied. Sortie completed."

Another short break with Don and the crew going on leave from 1st to 7th April, During this time the squadron flew a raid to Tolouse. 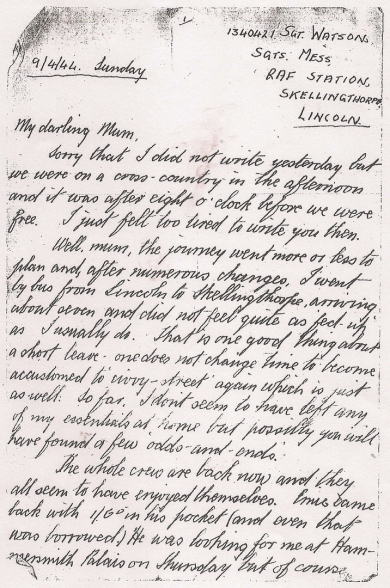 1st page of a letter from Don to his mother, dated 9th April on his return from leave. Three days later on the 12th April he failed to return from the raid to Aachen. 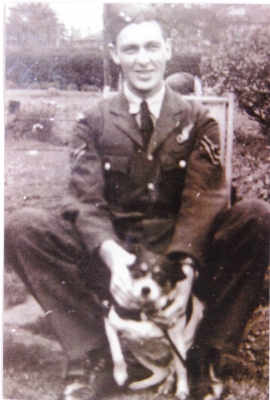 Don Watson. Judging by his corporal stripes, early on in his training.

The crews next trip was on the night of 10/11th April 1944. in Lancaster I LL840, when the target this time was the rail marshalling yards at Tours. They took off at 23.00 hrs, returning at 05.17 hrs. The pilots report states; "Primary target attacked at 02.47 hrs from 2,800 feet. There was no cloud, visibity good. Target was identified by red spot flares and river. Bombed centre of 4 red spot flares. One large explosion was seen at 01.47 hrs with columns of black smoke. Fires were burning well in town. Visual Monica and A.P.I. carried. Sortie (1/3rd) completed." 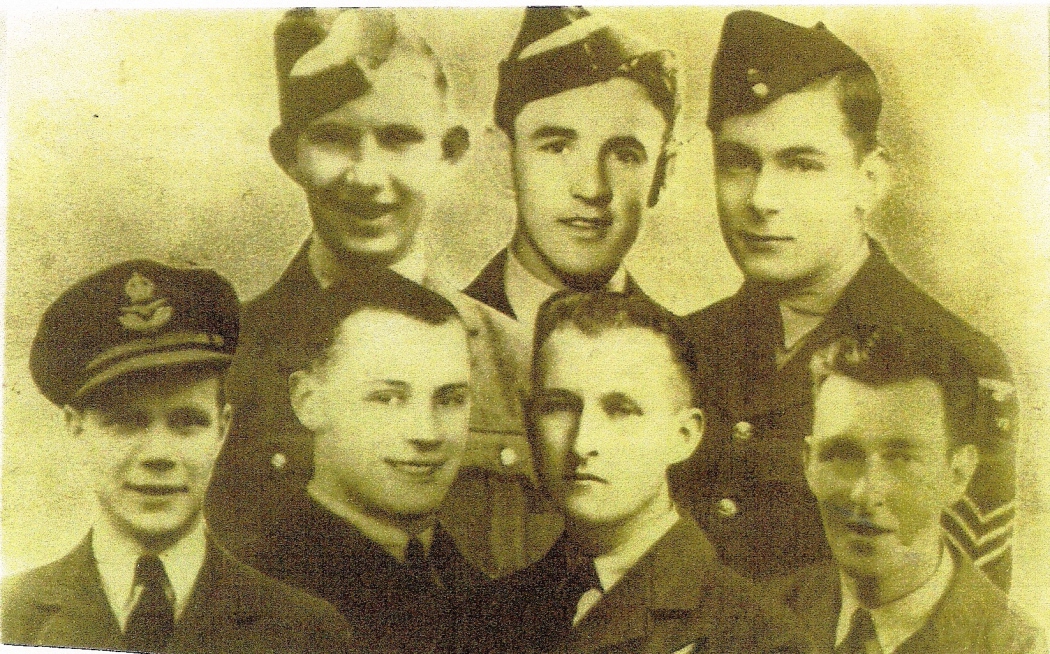 On the night of 11/12th April 1944, the crew took of in Lancaster I ME572, VN-Z. The target for this night was a road bridge at Aachen. Taking off at 20.34 hrs. The report says aircraft missing, no message or signal received.

Fifteen aircraft were detailed to attack AACHEN. Unfortunately of this numer one (P/O Skillen) failed to return. The remainder attacked the target as detailed. 9-10/10ths thin cloud at 7/8000 feet, visibilty good, target was identified by red T.I.s. Incendaries were rather scattered and tended to creep back. The marking and the bombing was fairly concentrated, and it should prove to be a good attack. The crews returned to base on the morning of 12.4.44. (165 X 1000lb M.C., 50 x 500lb M.C., 4500 x 4lb Inc.)

ALL ARE COMMEMORATED ON THE RUNNYMEDE MEMORIAL.