Len came from Walthamstow in London. At school he was a good student who won many prizes. Enjoying Footbal and Cricket amongst his pastimes.

In his youth he was member of the Air Training Corps and was part of the Walthamstow Wing.

When he left school he worked in the City of London for a stockbroker.

When war came, his father who had been injured in the First World War, advised him never to be in the trenches. So when he was old enough he volunteered for the Royal Air Force.

Upon joining up and following his basic training he trained as a wireless operator at No.4 Radio School at RAF Madley, Herefordhsire. Training at that time was done in Dominie and Proctor aircraft. Len was here from 15 December 1942 to 13 February 1943. 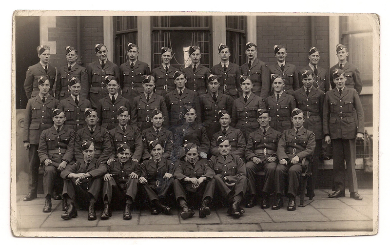 Following this he was sent to RAF Manby for a Wireless Operators "Emergency Gunnery Course". This was a ground gunnery course so no flying was involved. Completing that on 28 March 1943. By that time of course he was 1318521 Sergeant L C Green. From here he went to RAF Wigton in Scotland for further training as a Wireless Operator, this from 17 April 1943 to 29 April 1943, training on the Avro Anson. 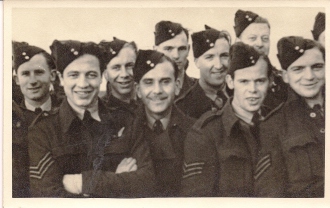 Photo taken by Pathe following a raid to Berlin. Len is 4th from right. 4th from left is Bert Jordan, Navigator.

Now it was on to 29 O.T.U at RAF Bitteswell, commencing his training there on 6 June 1943, subsequently moving to RAF Bruntingthorpe, where O.T.U training was completed on 4 August 1943. Flying in the Vickers Wellington it was around this time he crewed up with Sergeant Lundy, who was to be his pilot for operational duty.

Early October he was then posted to 50 Squadron having crewed up with the now Pilot Officer Lundy.

The full crew being;

The early part of the month he flew several training flights and on the 18 October he saw his first mission, this was to Hanover, a night operation. Flying in Lancaster W5004.

Put down at Leaconfield on return. Returning to Base on 28th.

Put down at Lakenheath on return. Returned to base on 3 January.

Subsequently it was learnt that Len had caught Pneumonia and was out of action for nearly a year. 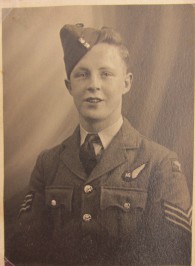 2 January 1945 saw him at No.5 Lancaster Finishing School where he joined up with a new crew and skipper F/Lt Phillips. He completed his time at 5 LFS on 7 February 1945 and was posted to 61 Squadron at RAF Skellingthorpe. He then commenced operations with this squadron. The crew being Flt/Lt Phillips, F/Sgt Watson, F/Sgt Woodward, F/O Munn, F/Sgt L C Green, Sgt King, Sgt A Robinson (Photo left). 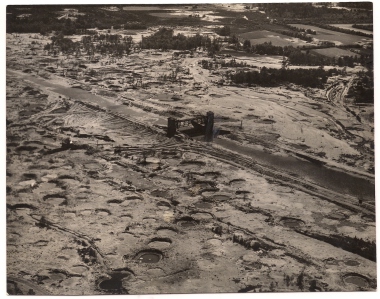 Picture right shows the results of raids on the Dortmund Emms Canal.

Put down at Oakington on return. Returned to base on 15 March. 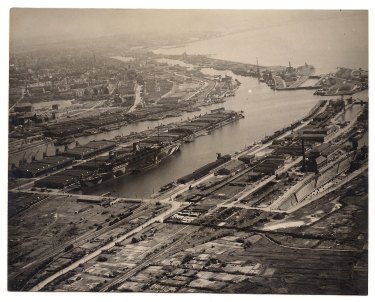 Picture shows Bremen with the liner "Europa" in dock.

At the end of May Len was posted out from 61 Squadron to 83 Squadron at Coningsby. Still flying with F/Lt Phillips and crew.

June 1945 consisted of normal practice flights, with a run on the 9 June to the jettison area.

17 July 1945 Lancaster (OL-H) This saw him carry out what he describes as a "Continental Tour" Base-Heligoland-Bremerhaven-Bremen-Hanover-Essen-Saarbrucken-Dortmund Emms Canal-Munster-Wesel. The "Europa was seen at Bremen. (See above photo).

9 September 1945 Lancaster (OL-C). Saw a run to Bari in Italy for Operation Dodge. Bringing troops back

He was then delayed in Italy from 14 December until 20 January 1946 because of Bad weather. Having spent Christmas in Italy.

Flying was now over for Len and after being demobbed he returned to "Civvie" street and back to working in the city, but the paperwork seemed too dull after his experiences and he joined the Metropolitan police in 1949. It was around this time that he married his wife Gladys. Len worked in the Police for over 30 years, ending up as Traffic Officer. Again, the comraderie of the environment suited him. After retiring as a police officer, he worked as a civilian radio operator for a while before retiring completely in the early 80’s.

Len passed away on 2 March 2016. His funeral was at Walthamstow cemetery and a wreath was laid on behalf of the squadrons association.