I would like to thank Terry Dixon for supplying the information and wonderful photos  about Warrant Officer William Charles Dixon and his WW11 crew.

Completed 32 operations in total and 18 in QR-F. Freddie, during his tour of operations with 61 squadron at RAF Skellingthorpe. 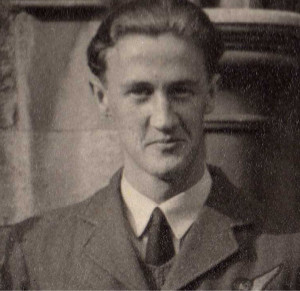 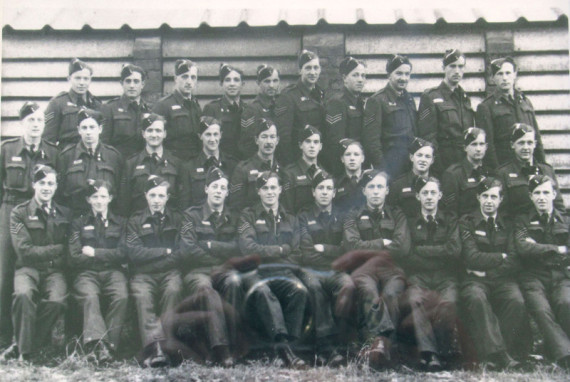 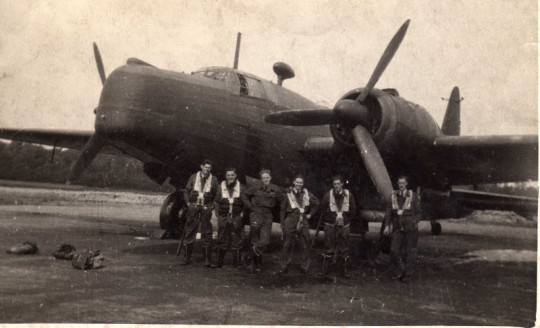 His original crew being:

Len Hume Taylor flight engineer became a member of the crew when they joined 61 squadron at RAF Skellingthorpe.

W/O William Charles Dixon wireless operator, of Bolton upon Dearne , but born in South Shields

September 1943. His training commenced at No.2 Radio School at RAF Yatesbury. Completeing 25.40 Min on Dominie and Proctor aircraft.

6 October. Bremen. QR-C. Dixon blacked out through lack of oxygen. Made 2 runs over target. Aircraft damaged by flak.

7 October. Flushing-Walcheren. QR-V.  Note; This and the following raid on the Flushing area of Walcheren was to breach the dykes in support of the advancing land forces.

14 October. Brunswick. QR-A. Bill describes this in his log book as a "wizard prang"

22 November. Trondheim. QR-F Having lost height approaching the target they spent time going round and round a valley to gain height. On arrival they were recalled without dropping their bombs. The cookie was dropped in the north sea, the rest of the bomb load was then brought back to base.   Apparently Bill Burns was a ladies man and he wanted to get back to Skellingthorpe so the F/E had to lean out the fuel. As they touched down at Skellingthorpe air field their fuel ran out and all 4 engines cut out on the runway. NO FUEL. PHEW close call that !!!.

17 December. Munich. QR-F. Made two runs over target during which lost an engine.

7 April. Molbis. QR-F. Made 2 runs over target, aircraft damaged by flak. This was his final operation. 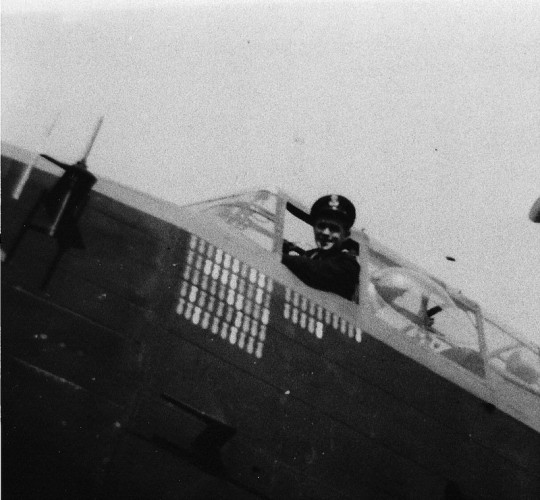 Pilot and Flight Engineer in position. 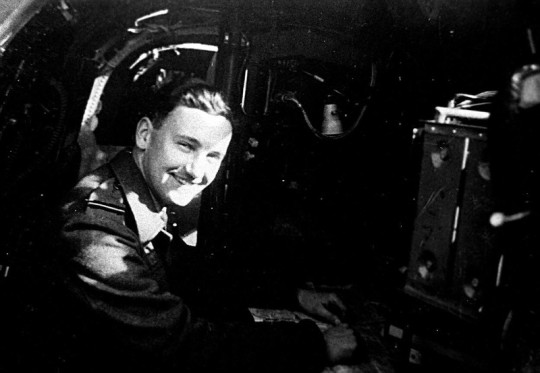 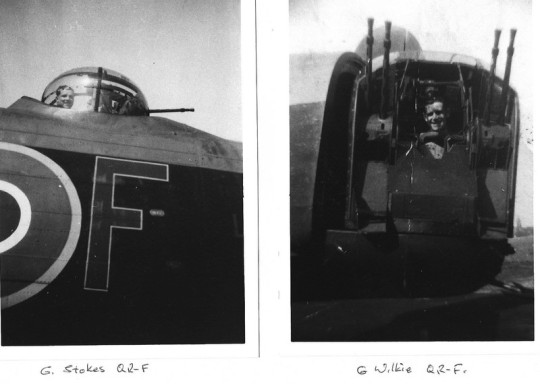 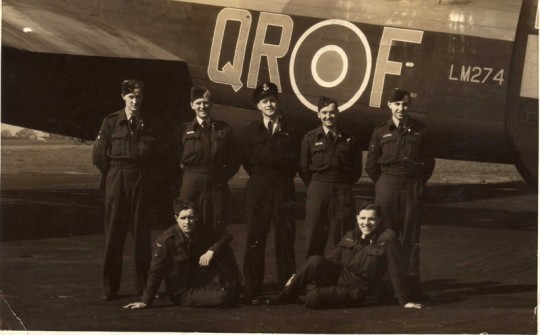 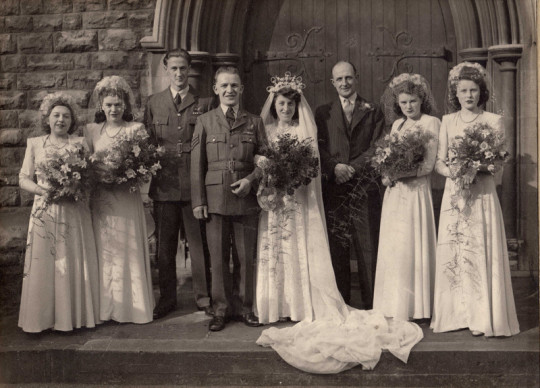 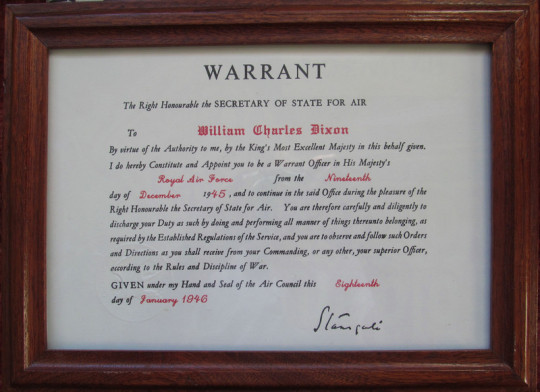 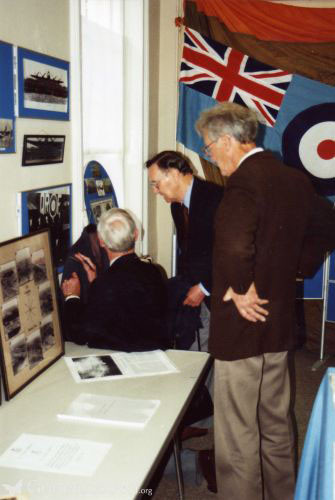 2010. Above and below: Mr Davidson with Tom and William at 'The Lawns', Lincoln. 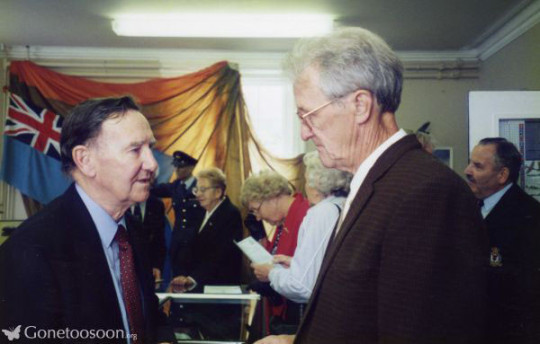 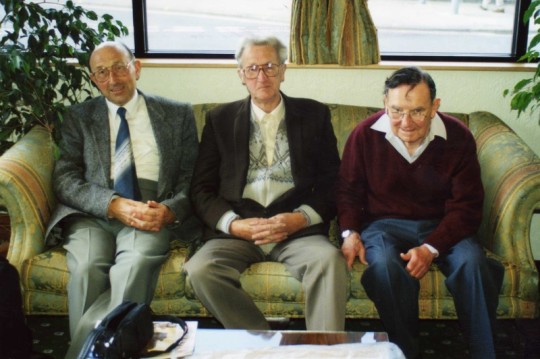 Relaxing at the Grand Hotel, Lincoln.

Message from his son,Terry Dixon.

Dad started life as an apprentice plumber but the second war interrupted that he then went to Skellingthorpe in Lincolnshire he joined 61 squadron in 5 group bomber command as a wireless op/ag air gunner from 1943 to 1945 some missions were in QRF LM274 Lancaster dads crew called him tiny as a nick name but dad was 6ft tall when dad left Skellingthorpe he was posted out to India for a time my dad would never say any thing about the war but he did tell me the funny things they did as a crew, on leaving the RAF Dad was given a form to apply for his medals my dad said if i have to fill in a form after what we have just gone through you can keep them he never sent for them and also he allowed me to ask for his warrant but he said never send for my medals and i his son said ,ok never, and i never will, he then went back to wade and sons of Wath to finish his apprenticeship
My dad then went on to be a pipe fitter welder, charge hand, forman , on the big petroleum plants like Flixborough dad was known as, Charlie pipe, another nick name they had for him he also worked for a company called head Wright son and also the green roof engineering company on York Doncaster he worked at many pits through out the country fitting coal washing plants but he never worked for the NCB he worked on the manvers cokeing plant ovens, some times he stayed in the Butlins camps around the country and went to work from there each day so he had some night life after work and so his wife my mom and my self his son could be with him and have a holiday too he was also a very good joiner he loved wood work also he loved his garden he had 3 green houses he would grow his own food everything from tomatoes to beans carrots parsnips peppers potatoes the hole range he loved roses too but the sad part is his job caused his death fibrosis asbestos dust filled his lungs no cure for that yet.

As a person with operational experience I know that W/O Dixon's simplistic log book reports conceal a tour full of danger, excitement, tension and luck.

It beggars belief how they avoided being shot down by 7 JU88s when the pilots of these enemy fighters claimed, or should I say, boasted, that no bomber ever survived after they made contact.

Then there were the times when their aircraft suffered damage and engine failure, and the time when all four engines cut out just as they touched down. Luck once again on there side, because, if this had happened seconds earlier they would have been goners.

Coupled with all of these things is the number of times when they deliberately made 2nd bombings runs so as to press home their attacks.

Heroic is what I would call it.

How sad it is that these brave men chose not to tell their stories so that future generations could appreciate their bravery and dedication.