I would like to thank Mary Allen for allowing me to include in the Veterans Album her fascinating story about how she was able to trace,  her father, Sergeant Dennis R. Allen's final operation.

Sadly Mary's family always refused to give her any information about her father's death. It wasn't until fairly recently she has been able to find out just what happened. This only came about after she was contacted by a German gentleman by the name of Joerg Mezger who has helped many families of lost Bomber Command aircrew to locate their lost loved ones.

What a wonderful thing this German is doing. ﻿

They flew the following ops, and on several occasions, the rear gunner Sgt Fisher, was replaced, and i have noted each replacement on date concerned. 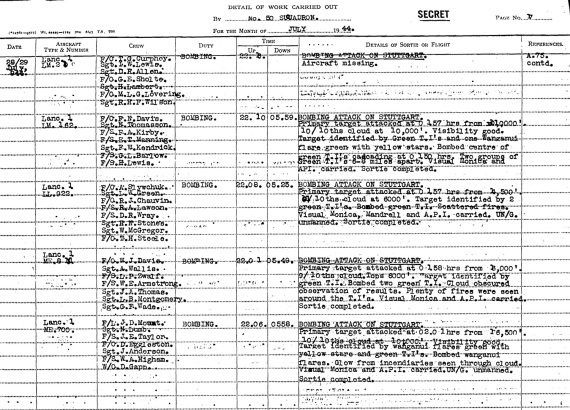 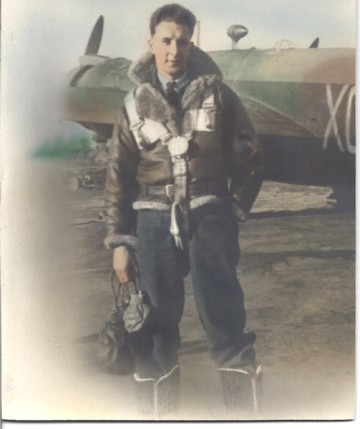 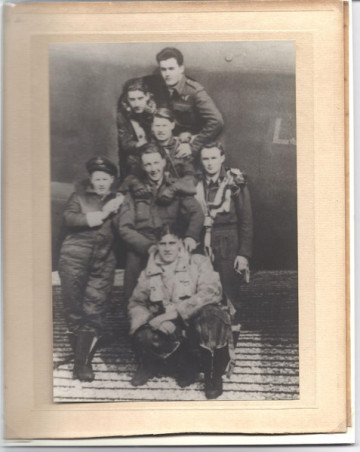 Jack Fischer was her Dad's original tail-gunner, who, on the night of the crash,

was sick with a respitory problem. He stayed in touch over the years, and in the early eighties she went to Canada to meet him again.
His was a fascinating story, and yet it still felt wrong, that he had not been able to go with the crew that night. She told him that if he had, she would have lost all the remaining contact with the crew, and that they would be glad that someone had been left behind to help her with the loss.

From what Jack told her, being a tail gunner had to be an arduous task and she thought we were very brave to have performed in such role. When it was considered how cold and lonely it must have been she is overcome with admiration, and we were all such young "boys" back then. She still cannot comprehend how 7 young men could get into a bomber every night knowing of the odds against them. and supposed that we must have not wanted to let the other's down and I'm sure none of us did.

He died about 15 years ago in the Toronto area. He was a lovely man.

In in a letter sent by her Dad after his death, he wanted his family to know that he went with a very brave band of men, and was honoured to do so. 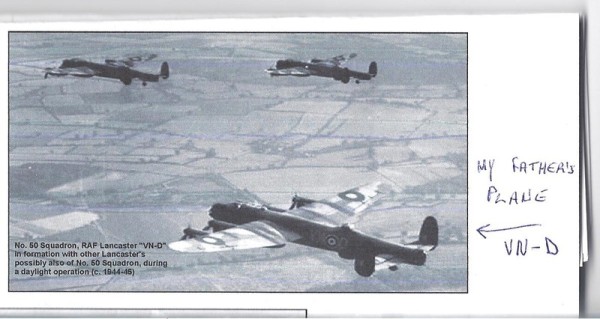 I wanted to let you know about a stage of my journey in trying to find out about my father's, and god-father's, plane and crew. They were flying Lancaster VN-D and were lost after bombing Stuttgart, over Huchenfeld on the night of the 28th-29th July, l944.

After my Dad was killed, I was never allowed to talk about him much, I was told that his plane might have crashed into a tree and given him a very bad nose-bleed, but we didn't know. We lived with my maternal grandmother in a tiny village (but mentioned in the Doomsday Book) called Upper Weston, near Bath, and I remember whenever a plane flew overhead I'd go out and sit on the wall by the brook, and look down the village, waiting for my father to come home until someone would call me in and say he wasn't coming that day.
Next thing I knew it was 1947 and my mother remarried (someone who'd been on the Burma Railroad) and I was never allowed to speak of him again. My name was changed (unofficially) from Allen to Unwin and we travelled all over Europe and the Middle East with my step-father's regiment and, until he died, 5 years ago, it was an unspoken rule that my Dad was never mentioned, however, my stepfather did come with me to the cemetery at Durnbach once. After he passed my mother constantly spoke of my Dad and how she always loved him.

A couple of years ago a German gentleman who has taken a interest in the fate of the many aircrews, contacted me. He told me he had been to the site of the crash, and sent me some photographs. We corresponded, and when I came home to England in October this year, he agreed to meet with me at the site of the crash.
A friend and I flew into Stuttgart, rented a car and booked into a Gasthaus near the village of Huchenfeld. The following afternoon we arranged to meet Jeorg at the edge of the forest where the plane went down so many years ago. We went into the forest, and Jeorg pointed out an indentation on the forest floor, and said that that was where the impact was made. I cannot adequately describe the emotional experience, it felt "surreal" to be where everything came to an end for them. They were on their way home, and must have been feeling hopeful, if not "out of the woods".
We spent 2 or 3 hours in the forest, Jeorg had a metal detector, and we were able to recover several small pieces of the plane that had been buried for years. Apparently the wreckage spread out over a fairly large area, and the tail had broken off several hundred yards away, and sadly the tailgunner had tried to activate his parachute, and was found hanging from the tail by the parachute. I believe he was only 19 years old.
Jeorge gave me a copy of an eye-witness account, unfortunately it's in German, but I am going to have someone from the U.S. Air Force Academy's German Dept. translate it for me. I understand it was given by the "grave digger", someone I had spoken to 37 years ago, while in the vicinity of the crash, who had helped removed the bodies from the plane. That too was a strange experience, shaking the hand of the man who had taken my father's body out of the plane.
After we were finished in the forest, we had a drink and went over my "finds". Jeorg was very knowledgeable about the crash itself, and in identifying some of the "bits". He said that the villagers did not know why the whole crew didn't bail out, but I suppose it was because they didn't have time. He said that the reason the site is still there, is because it is in a national forest, and was therefore preserved, although treasure hunters took away most of the "souvenier" pieces, and the German government salvaged the plane itself and reused the scrap.
I will always be grateful to Jeorg for giving me the opportunity to fulfill a lifetime's "mission", to be where it all ended. The following day I went back into the forest alone, and spent some time there, and it was a very humbling experience.
The next day we went to the War Cemetery at Durnenbach. I have been there several times before and it is a very beautiful and peaceful place. I left a few small pieces of the plane there, in among the flowers, on the graves. 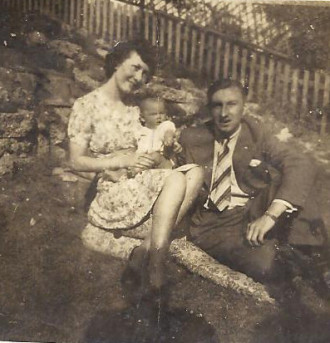 When I first met the gravedigger, who took the bodies out of the plane, and gave the eyewitness account to the authorities, he gave me a photo he had taken off one of the bodies, and asked me if I could return it to someone. I've never been able to find anyone who recognized it, inspite of having asked whoever I could, which wasn't very many. Perhaps someone out there will see this story and recognise the people on the photo.

My god-father,  Thomas Curphey was, also in my father's crew, so I lost both my father and my god-father that night. Thomas was the only son of Thomas Christian Curphey and Eva May Curphey of Manitoba. His father had been born in the Isle of Man and emigrated to Canada, and from what I understand, he worked for the Canadian Pacific Rail Road company and became a vice-president.
I stayed in touch with them too, until they died in the seventies. I had two children, one I named Thomas Allen, after my god-father, and the other Dennis, after my father. In a bizarre coincidence, my son was killed in Dec. 1995 and is buried in a military cemetery, (at the U.S. Air Force Academy), on the edge of the Black Forest, just as the crew are buried in a military cemetery (Durenbach) on the edge of the Black Forest in Germany. 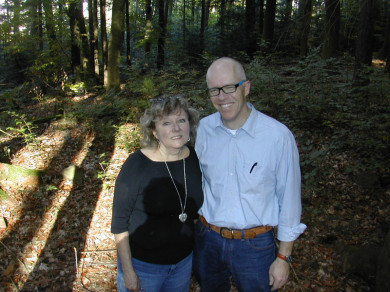 Mary and Jeorge near the crash site in the woods.

His full name is Joerg Mezger. He lives somewhere in the vicinity of Huchenfeld, and he takes a particular interest in planes that went down in that region. He is in his late forties and so wasn't himself involved in the war. 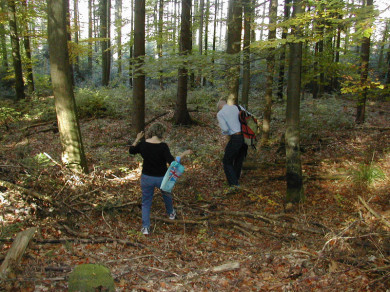 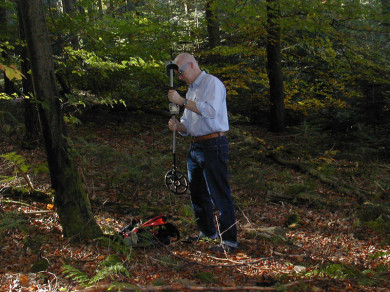 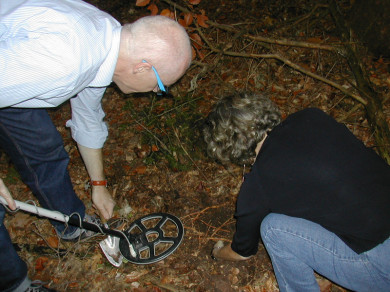 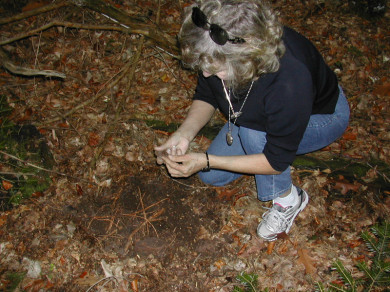 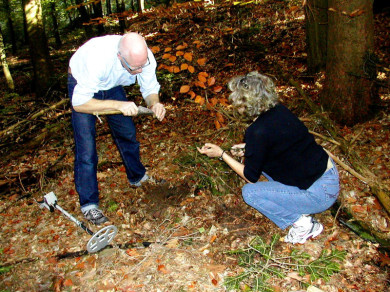 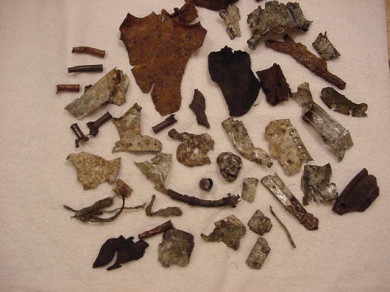 Bomber fragments found in the woods. 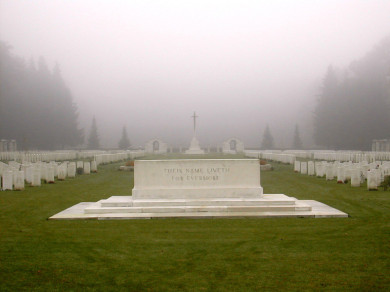 Lives so nobly given. 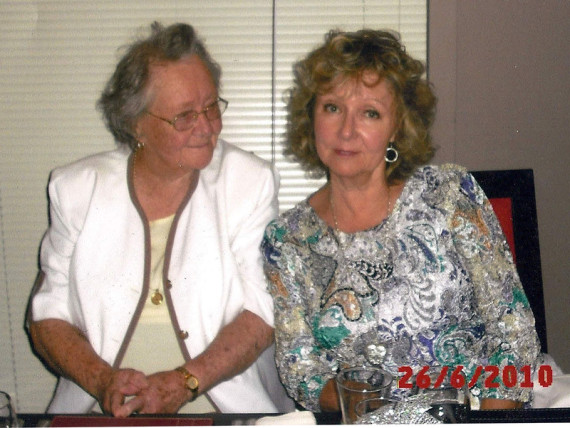 Above: Photo of Mary(on right) and her mum, Mrs Violet Unwin, taken on  Violet's 90th birthday.