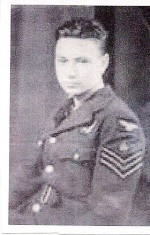 George Kelly, who died in Glasgow Royal Infirmary, aged 88 years, was born in Possilpark on 3 February 1925, the third son of John and Jeanie Kelly, with twin brothers and a younger sister. He attended school at St Agnes’s Primary and later at St Mungo’s Academy, Glasgow, where he learned to love ideas, debate and reading.

At the outbreak of war in September 1939, George became an apprentice plater at Babcock and Wilcox, Renfrew.  Despite being in a reserved occupation, he volunteered for the RAF in 1943, aged 18.

With his fellow volunteers he was sent to Lord's.Cricket Ground, No1 Initial Assessment Centre, then trained as an Air Gunner, at Bridgenorth then at Dalcross, Inverness. George became operational in May 1944 at 50 Squadron, Skellingthorpe, Lincolnshire as turret gunner. He and his crew, in Lancaster VN-L “Love” LM212, flew 13 missions, including the mission in which Wing Commander Guy Gibson was killed. A few days later on the night of 23/24 September 1944, his Lancaster was shot down near Slangenberg Castle, Guilderland, Holland, returning from the Ladbergen Raid. The German pilot was Nachtjager (Night fighter) ace Heinz-Wolfgang Schnaufer. George was the only survivor, his life saved by his parachute.

His crew mates: F/O J Sweetman, F/Sgt E Gully, F/Sgt E Hobbs, F/Sgt A Johnstone, F/Sgt W Wilcox and F/Sgt G Keens were buried at Zelhem. He was taken into the jurisdiction of the Dutch Resistance, moving from house to house. He was particularly touched when helpers, mainly Protestant, made sure he and other fugitives were visited by a Catholic priest. For 2 months, in a dangerous, volatile and deeply scarring experience, he was on the run in occupied Holland. On November 18 he joined in the failed attempt, known as Pegasus II, to cross the Rhine with other isolated troops from Operation Market Garden, but was captured. He was taken to the Dulag (central interrogation camp) in Frankfurt-am-Main, before transfer to Stalag Luft VII Bankau (Polish Bakow) in Silesia (now Poland) in December 1944.

On Friday 19th January 1945, as the Red Army advanced westwards, the Germans abandoned the camp and forced the prisoners of war on a gruelling march towards Germany in temperatures reaching minus 20 degrees. With little food and inadequately clothed and shod, the sorry column headed out. Now known as the Central Route, they reached Goldberg (Zlotorya) on Monday 5 February, a distance of over 400 miles.

The route took them through Kreuzburg (Kluczbork) and Winterfeld (Zawisc). They crossed the Oder at Brieg (Brzeg). On Thursday 25th after a 4am start they marched 30km to Heidersdorf (Łagiewniki). On that day they met up with prisoners from Lamsdorf Stalag Luft VIIIB. On Monday 29th they continued through a blizzard during which an older guard died. George remembers how some of his starving fellow marchers simply lay down and perished in the snow. On Tuesday 30th January starting at 02.30hrs from Jauer (Jawor) they continued until Thursday 1st February ending at Prausnitz (Prusice).

On Monday February 5th they marched arriving at Goldberg (Złotoryja) at 8.45hrs.  There they boarded the train which took them via Sagan (Zagan) to Luckenwalde Stalag IIIA outside Berlin. Here, thousands of Allied prisoners, including Russians, were corralled in appalling and unstable conditions for many weeks, still unsure of their fate.

The Red Army liberated the camp in April 1945. After a tense month of negotiations between the British, Americans and Russians, the prisoners of war were released. George returned home in May 1945 to be reunited with his family, who had thought him dead for many months. He was then posted to RAF 328 Repair and Salvage Unit at Buc near Paris for 18 months and demobbed in Spring 1947.

After a period working for the Forestry Commission in Argyll and Cowal, George returned to Babcock and Wilcox to complete his apprenticeship and attended night school to improve his qualifications, becoming a draughtsman. At this time Babcock and Wilcox were involved at the cutting edge of nuclear, petro-chemical and semi-submersible technology. George taught metallurgy at Reid Kerr and later Strathclyde University. He later became Head of the Drawing Office in Renfrew.

In 1956 he married Margaret Doherty, a nurse, and had 5 children, whom they brought up in Bishopbriggs. George was active in the local community, a leading figure in strengthening the 140th (Glasgow) Scout Group and was Group Scout Leader for a number of years. He also helped establish St Helen’s Primary School, Turnbull High School and St Dominic’s Church and Parish in Bishopbriggs. In the 1970’s he went through redundancy and dark times as well as successes. George eventually retired in 1990 after working at St Mary’s School, Bishopbriggs.

In 1992 Margaret, a much loved community midwife, died suddenly aged 58 years. Few people thought that he would survive her longer than a year. And yet he started perhaps, his longest march. He lived in a flat beside Bishopbriggs Cross, where he became well known to many people in the area, especially the shop keepers and their customers. He had family and grandchildren living close by.

After a major illness in 2011 George was no longer able to leave his flat. He would, however, read his Herald along with another broadsheet every day, avidly studied his books and loved to discuss politics and history. Four days before he died he was admitted to Glasgow Royal Infirmary.

He remained alert to the end, satisfied to have outlived a certain former Prime Minister and honoured that he might accompany Nelson Mandela. On the morning he died he shooed his family off to get a Herald so he could see the spectacular picture of Andy Murray at his victory the day before.  St Dominic’s, Bishopbriggs was full of family, friends and neighbours, for his funeral, and in his honour a glass of malt whisky stood on the bar of Cawder Golf Club afterwards at lunch. He is survived by his 5 children and 8 grandchildren.

In 1944 George was missing, presumed dead for several months. His name was put on the Roll of Honour at St Mungo’s Academy - it is still there. And so, 69 years after his crew mates in Lancaster VN-L Love and 21 years after his wife Margaret, the last boy finally goes home.