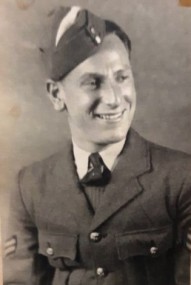 Robert Wilson was born in Aberdeen in 1920. His father was a joiner so Robert was a trainee carpenter. Volunteering for the Royal Air Force as soon as he was old enough he trained as a Flight Engineer. Following his engineer training he joined his crew at 1660 Conversion Unit.

His first operation was with Squadron Leader Birch. Therafter he flew ith three different pilots, but mainly Sergeant F G McGrath who was posted in to 50 Squadron at the same time.

The above photo's are Bob Wilson during basic and trade training

W R Chorley make the further statement in his Bomber Command losses; "very Feint signals w/t signals were picked up at 04.45 and the lancaster was then thought to be some 60 miles off Skegness. An air sea rescue search was mounted and a few small peices of wreckage were found in the search area. All are commemorated on the Runnymead Memorial.

Sergeant Wilson and his crew are commemorated on the walls of the International Bomber Command Centre and further details of the crew can be found in the posses database;