I would like to thank David Geddes - Maj rtd RAMC/RADC - 4ADFA in the 1970s
and his family for allowing me to enter Sgt. Lewis W. Morrison's story in my Veteran's album. It has been a privilege doing so. 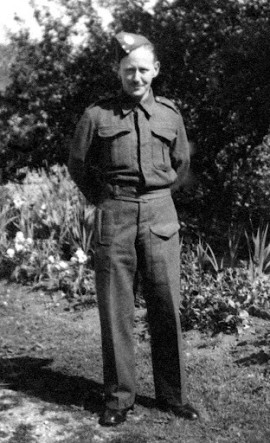 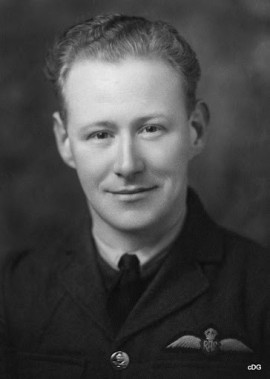 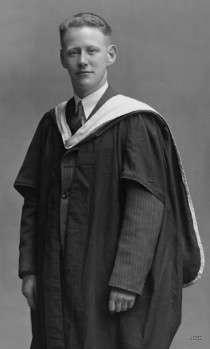 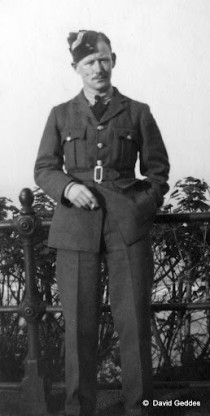 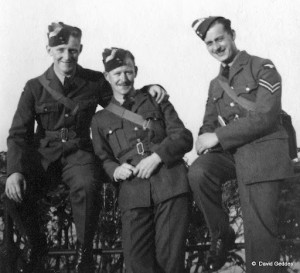 Scarborough 1941 Initial pilot training.
Those either side of him remain unknown to me - the one on the left was originally a Commodity (Tea) Broker from London City. 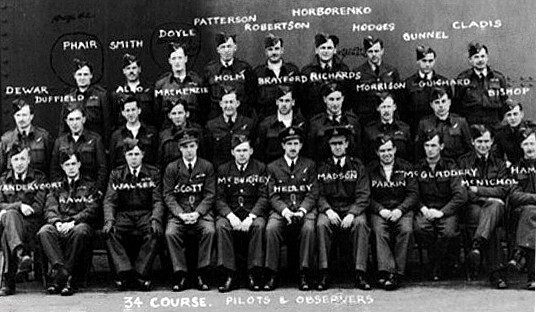 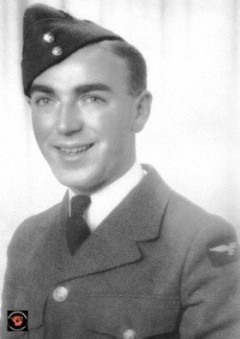 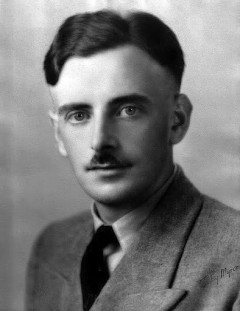 Very likely to have been commissioned if he had lived.

Sgt Cormacks grandfather was from Keiss, a tiny village north of Wick, where David Geddes great grandfather and great uncle were drowned off the wreck of the Brigantine Samson in Feb 1884, while he would have still lived there. Sgt Cormack's father lived and worked as a Fire Officer at Sciennes House Place in Edinburgh, the old fire station having been the garages of the Edinburgh University Car Club - where I serviced and repaired my rally car when I was student! Its now converted offices. As I keep saying - its a 'wee wee sma world'. 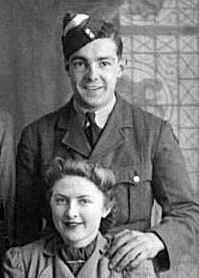 Sgt Thomas Ralph Bevan (always known in his family as Ralph) RAF Rear Air Gunner.
He managed to bail out but at too low an altitude for his canopy to open.The rear gun turret was considered the most difficult exit of all from Lancasters, and the most vulnerable crew position. It was unusual for a rear gunner to have room to wear a parachute , even have it within reach.
Sgt Bevan very nearly made it back to ground alive.

In time rear gunners were issued with pilot type parachutes. If Sgt Bevan had had one of these sit on parachutes he could have slid open the turret doors and been out in a matter of seconds, possibly saving his life.

Lancaster Bomber MK1 Pilot., with 6 other crew on a nightime sea mine laying operation. It was hit over Denmark by a night fighter piloted by Oberleutnant Willi Eistermann (himself KIA in 1945)

Taken from Material sent by his nephew, David Geddes:

Sgt Pilot Lewis Wilson Morrison flew Lancaster R5679. On his 1st op as captain, after flying many 1000 bomber raids as 2nd pilot, they were shot down by nightfighter action north of Karup in Denmark. The bomber crashed in flames narrowly avoiding the village of Gronhoj. An eye witness account has been recently published. My research only started in 2011. It was a consistent story that the deaths of all the crew had been a war atrocity. This is entirely untrue, but my mother lived with this story all her life, and it affected her greatly. My father found the grave in 1964. In the family I believe his photos were viewed once and put away. It is only now that I have built enough information to pay due respect to the life of my uncle and the aircrew that died with him. I am indebted to correspondents for their willing contributions. My research has proved very emotional. We shall remember them. My son, one cousin, a second uncle and two nephews have been christened Lewis.

You may have already picked up that the information given to the crews families once confirmed KIA, was they had been flying a Wellington, were hit by flak, all bailed out and were all shot by machine gun fire as they descended. This is untrue. But this is
the story my mother lived with until she died in 2007, and she was bitter about all Germans. I spent 4 years with 4 Armoured Div Field Ambulance based at Minden, Westfalia - where she refused to visit me. (you may have bombed it!!! - Strategic bridge there over the River Weser. It maybe yet, that some descendants of the crew know no more of the story of the loss of this plane and its crew than that war time information wrongly given. It is exactly the reason that none of our family looked at the story until I inherited my families papers after my parents deaths. In there were my fathers war diaries, and my parents 2500 letters to each other. Here I started to find bits and pieces
that did not match up with basic info on the web.The breakthrough was astonishingly quick. I asked a Danish colleague with whom I carry out dental field surgery in Nepal and Tibet, to carry out a Danish language search using a Danish search engine. It took her 20 minutes to find the eye witness account of R5679's downing, on Anders Straarup's web pages. A huge moment for me

Yesterday "Thundering through Clear Air" arrived. I am deep into it already. I was
married in Lincoln where my in-laws were headmistress and depute dean of the teacher training college. I've seen the Lincoln Imp, and have a framed image of the Imp given to us on our marriage late in 1979. Its a wee wee sma' world!

Lewis Wilson Morrison's father was Lewis Morrison and he had 7 sisters. In the early 1920s the family largely dispersed to Canada, USA (2), Tasmania, Australia, one stayed in Edinburgh and one was married for a short time in the south of England and returned after a failed marriage to be a spinster nurse/ matron in Aberdeen. I think I have all of their generations in my family tree. This is another initiative in the last 18 months and has built from about 20 known relatives to 2500+ now. There are Edinburgh Morrisons, whom I have recently corresponded with that I had no idea existed. I shall certainly pose the question to them - they are also avid genealogists - another branch of a family that did very little after 1920s to keep in close contact. 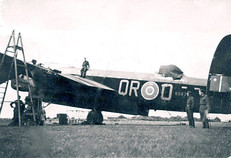 Picture of their aircraft, QR-O Oboe on that fatal evening.

The plane that is seen in the photo with flak damage to post wing trailing surfaces is the plane that went down at Gronhoj, though the photo is taken at St Eval when on loan to Coastal Command in summer 1942, the pilot being Flt Sgt Turner whose son is in contact with Mike Brewser, is related to Ralph Bevan.
It was shot down by night fighter action by a plane piloted by Ob Lt Willi Elstermann from Karup, who himself, did not survive the war.

The Lancaster crew perished 1100 meters from the centre of the village of Gronhoj and are buried together in Fredrederikshavn.

The crash site was confirmed in October 2012 as 1100m west of Gronhoj.' There is a relatively recently published eye witness account from the daughter of the Gronhoj Inn owners, which inferred that the pilot possibly steered the stricken plane clear of and west of the village, attempting to put it down on the flat bog land to the NW - now Drained and cultivated.determined efforts to raise an inscribed commemorative stone at Gronhoj and create a small museum to this plane and crew. Mike Brewser  who works in publication is putting together a booklet with all that is eventually discovered. I shall probably take a slightly different editorial slant and create a self publish book for the family.

Yesterday I finally managed to meet the man who married one of the sisters who lived next door to Lewis and Margaret Morrison when they were children in Inverurie , Aberdeenshire. He is 101!  Lucid as can be. He told me lots of things I did
not know of my uncle in his childhood. Just goes to show - we must never give up
on a story - there is always  something else. 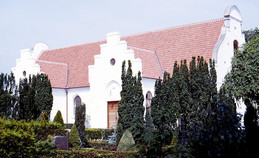 These photos were taken by his father in 1964 when on a Scottish County Clerks' tour of the some Danish Municipalities. It took some effort of organisation to make this extra excursion.

A small corner centred around a tall white cross is the allied sailors and airmen's cemetery from WW2. 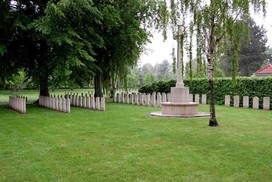 The crew of R5679 are buried here. Lewis' grave is right of the tree with red flowers visible. 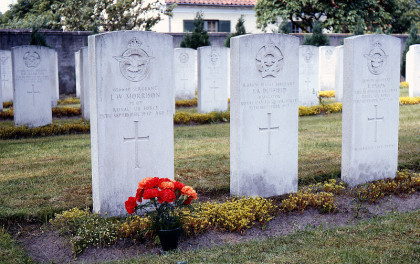 The graves of Sgt Pilot Lewis Wilson Morrison, Flt Sgt Duffield and Sgt Dyson.
The stone is Portland limestone. David lived on Portland from 1986-96. He used to run through the quarries that these stones were cut from, on a daily basis.

How strange that things come round full circle so often. 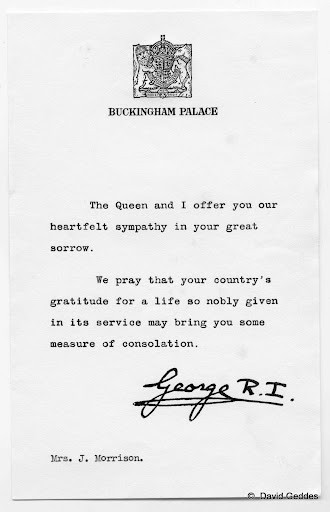