60 years later Chris Keltie and Bill wrote a book called 'IN THE SHADOW OF DEATH', with their permission extracts are being used from the book to assist in producing this story. 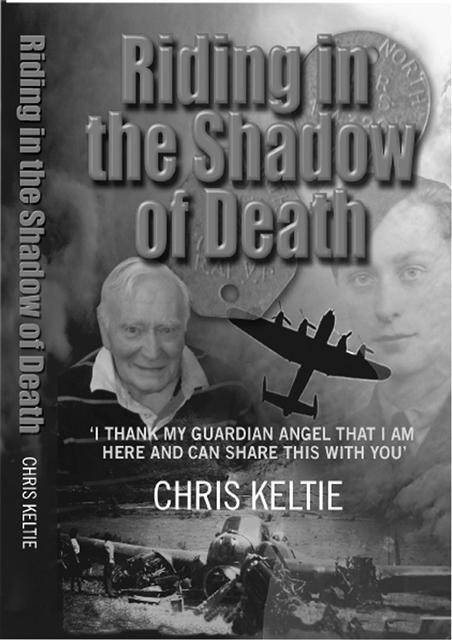 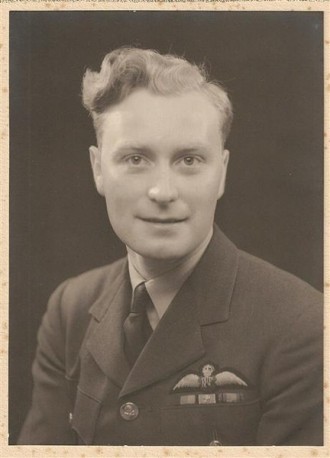 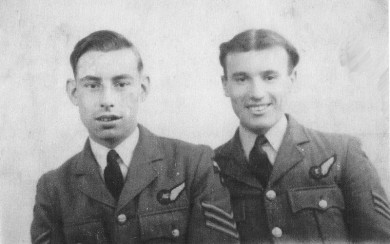 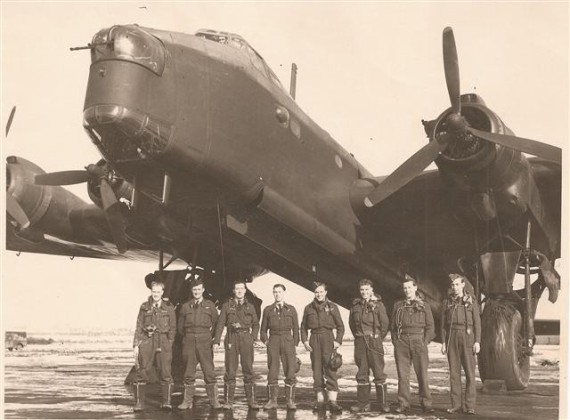 Bill North and crew infront of a Stirling bomber 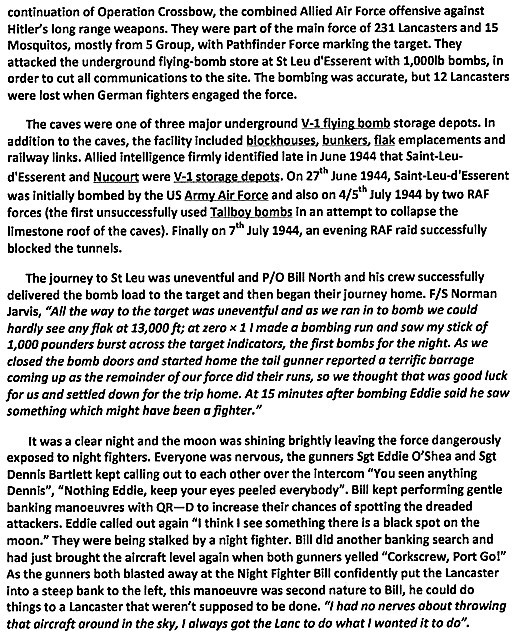 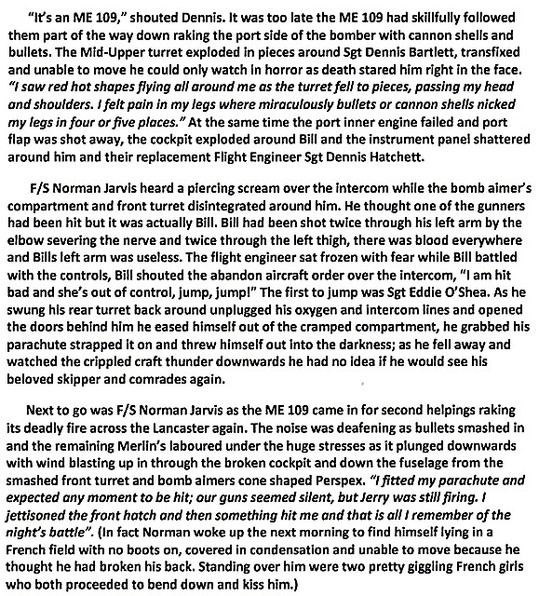 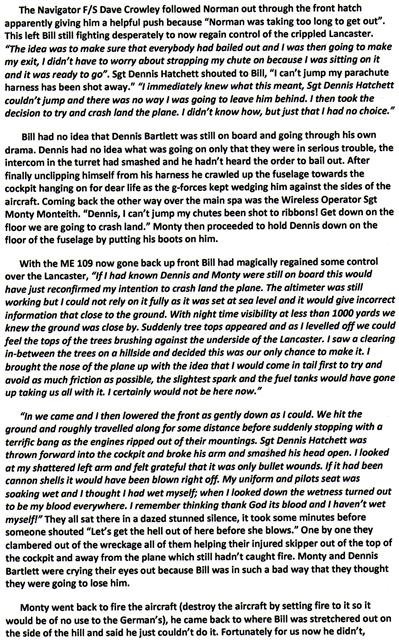 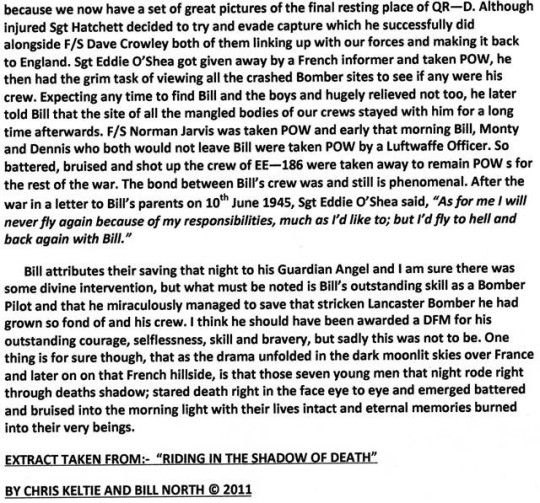 1998. Bill was contacted by local French historian and WW11 aviation crash expert Laurent Vito who gave Bill a set of pictures of the crash site. Bill was gobsmacked he couldn't believe he was looking at his beloved Lancaster after 50 years. Bill donated his RAF uniform to this museum and a record of the crash pictures are in it.

During April 2000 Bill and his three sons revisited the crash site, needless to say they were the centre of attention among local people. 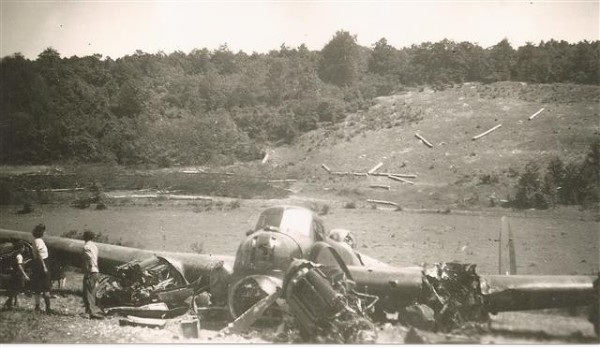 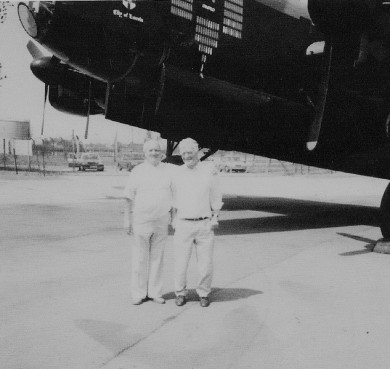 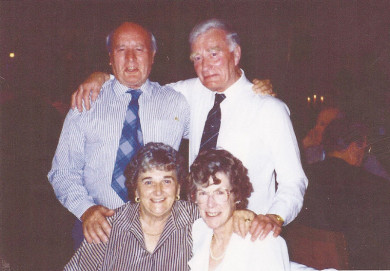 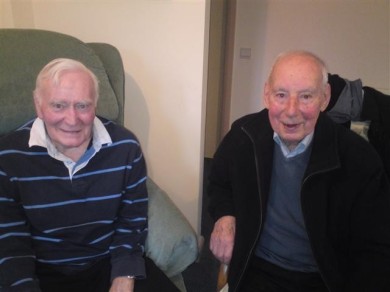 These three are the only crew members still alive. 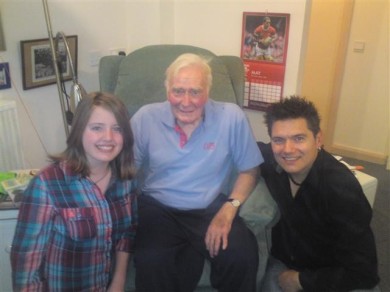 lst left is Chris's daughter, next is Bill and on the right is Chris.

Bill and his wife Margret had three sons, David, Alan and Rhys.

When I look back at everything we went through while serving in Bomber Command, I can't help but feel that I shouldn't be here now when so many are not, but I am and that is an odd feeling. Every night we flew in the shadow of death and I think about it every day. I thank my Guardian Angel that I am here and can share this with you.

Sadly early on Thursday morning 15th December at 00.30. Bill passed away peacefully. Alun his son rang me in the morning at 09.20 to let me know Bill had died. I had a funny feeling all day Wednesday and felt the end was near. His family and friends fortunately had time to see him and share similar farewell experiences. Bills funeral was a truly moving experience. I think there were about 250 people in the church for the service, the most amount I have ever seen. It was a beautiful service with his son David reading out the eulogy which had everybody in tears. Bill meant so much to so many people and it was lovely to see so many come to pay their respects. We all went to the get together afterwards at Pinner and Grammarians Rugby Club which he was president of from 1977-2002, everybody shared their memories of him. I feel honoured to have known him over the last 40 years. I first met Bill North and his family in 1970 when I was 7 years old and my family moved into the house next door. We were invited in to see them for a welcome to the street and in Bill’s front room above their TV was a picture I have never forgotten. It was a picture taken in March 1944 at RAF Winthorpe 1661 Heavy Conversion Unit (HCU) of RAF Pilot Bill North and his crew standing next to a Stirling Bomber. This picture instantly fascinated me and has done ever since.

My Mum and Dad had quite a stormy relationship and there was always some sort or drama going on in our house, Bill’s house was like a calm port in the wild storm that was my life. Bill and Margaret North were the kindest people in the world and took me under their wing, I ended up nipping around to see them all the time. Part of the attraction was also that they had a TV and we didn’t. Bill and I used to sit and watch programs like the World At War series and a program called Pathfinders, a fictitious drama about the RAF Pathfinder Squadrons. Alongside this Bill would tell me stories about his life during WW2 while serving with Bomber Command.

Bill never readily talked about his war experiences, but if you asked him he would tell you. His story was revealed bit by bit over the years. As time passed and I grew older Bill would frequently get a briefcase out that contained a unique collection of documents relating to his RAF service. There were pictures, letters, diaries and a Flying Log Book that detailed all Bill’s training flights and Operations. These documents fascinated and inspired me and were like holding history in my hands. As I grew older the more I found out the more I realised what a truly extraordinary man my unassuming next-door neighbour and good friend was.

About 3 years ago I was visiting Bill at Regal Way and we were looking at all his documents again when I said to Bill "You know there is a story here that needs to be told." Bill replied "Well why don’t you write it then." I was gobsmacked, I instantly replied yes without a thought for what I was getting myself involved in; so began a war time adventure and life story called "Riding In The Shadow Of Death" which I feel privileged to share with the rest of the World.

The first thing Bill asked me to do was to track down his Mid Upper Gunner (A.G.1) Sgt. Dennis Bartlett, they hadn’t seen each other since 1944, 67 years! The last time they had seen each other was in Beauvais prison hospital in France in 1944 after they had survived being shot down. After months of searching I finally found Dennis who was living in Camberley. I had got to finally meet a face from that picture of Bill’s that I had been fascinated by since I was 7 years old, I can’t tell you how I felt, it was amazing. Dennis Bartlett was just like Bill, an absolutely lovely and unassuming man; it felt like I’d known him forever. Bill and Dennis were reunited on the 18/03/11 and it was an honour to witness the two Veteran’s sharing the past like it was yesterday. Their reuniting and crash landing on 4/5th July 1944 was the focus of a Daily Mirror story printed on the 1st Dec 2011, it can be read online at

Little did I realise that such a story would evolve when Air Vice Marshal Nigel Baldwin (Rtd) told me at the 2011 50/61 Squadrons reunion that he had someone with him who had a story for my Veterans Album. It has been a privilege to produce it.

F Lt Bill North, wounded in the left elbow and thigh, his left arm hanging uselessly because of a severed nerve, losing large amounts of blood, and with the aircraft screaming downwards out of control, gave the order to bail out, then when about to bail out himself, having just found out his Flight Engineer's parachute had been shot to pieces, he immediately made a conscious decision to remain at the controls of his aircraft to crash land.  He then performed a near miracle act by one handedly crash landing his aircraft in a forest clearing, in pitch darkness, thereby saving the life of his F/E and two other crew members (their parachutes ripped to pieces by enemy fire) who he thought had already bailed out. After the aircraft came to stop Bill was so weak from loss of blood and injuries that he had to be lifted out of his seat and carried out of the aircraft by the crew members whose lives he had just saved. After  laying him on the ground they thought that he was dying.

I find it difficult to believe that this act of unselfish bravery and skill has not received recognition of the highest order.