Jack Lascelles was educated at Dulwich College, gaining a school prize for excellence in Mathematics. He volunteered for the Royal Air Force at the Yorkshire Grey Public House in Eltham Park for aircrew duties. He did his initial traing in England and soon went out to South Africa as a sergeant to trian as an Observer. During the trip by boat, jack was able to avoid many of the duties as having a fine tenor voice he entertained the troops during the voyage.

It was fortunate that the family had relatives in South Africa who looked after him and showed him around the country during his leave periods.

Haing been commissioned he returned to England for further training at Bournemouth at a requisitioned hotel, believed to be the Royal Bath.

Jack did navigator training at Cambridge University, during which time he supported the Light Blue team in the boat race. Having trained as a navigator he was sent to 1654 Conversion Unit before being posted to 61 Squadron on 27th October 1942.

His first operation with 61 squadron was a gardening operation, Being part of Norman Barlows Crew. He flew the following operations;

He flew two operations with 50 squadron

Flight Leiutenant J C Lascelles stayed with 50 squadron until 9 January 1946 when he was posted to 100 P.D.C. for class A release.

Davis and Alan Lascelles relate many of the experiences with their father. His first trip was the Thousand Bomber Raid on Cologne in a Wellington. (This must have been before joining 50 sqn, probably at the OTU. ED). I understand, like many aircrews he developed a deep held faith in the 'almighty'. As an Observer I believe that he did the bomb aiming and the aim point was the Cathedral. On a family holiday to Germany in the 1971 we visited Cologne and climbed one of the two spires where he commented that 'we' missed the target! His later ops included the Battle of Berlin and the Battle of the Ruhr. I recall that 61 Squadron was the first squadron to evaluate the Lancaster Mk 2s with the Bristol Hercules radial engines with a much lower service ceiling and smaller payload than the Rolls Royce Merlin powered Lancaster Mk 1. He flew in Norman Barlow's crew (he was from either Australian or New Zealand) and over Berlin they were caught in a searchlight as they bombed and did a corkscrew dive to low level but lost an engine to flak. This may have been the time when he did an emergency landing at RAF Manston in Kent with two engines out.Dad did the course back home which was executed at low level without any bother from the enemy. This gave evidence of the effectiveness of low-level flying. He also did ops to Italy (Turin) where they flew onto North Africa for refuelling before flying back home. I also recall ops to other German cities such as Munich. When David lived in Munich during the 1980s seconded to NATO on the Tornado programme, Mum and Dad came out a few times and, on a Christmas visit we called on my secretary Ingrid who was a little girl in Munich during the war. When she asked Dad if it was his first visit to Munich, he had to admit that he first visited in 1943. He still got his sherry! We both recalled him saying how on one occasion he landed at Farnborough after an op due to bad fog over much of England. After breakfast in the Mess they prepared to take-off back to base and were held as a funny little aircraft without propellers who whooshed down the runway and into the air. This was the Gloster E28/39 — the first British jet — perhaps flown by Winkle Brown! After completing their tour, the crew were rested and given leave. At that time there was a call out for crews for a new special squadron which Dad politely declined as he thought that he had earned his leave. Norman Barlow volunteered for the posting. Thus, was formed 617 Squadron the 'Dambusters' named as operation "Chastise". Norman Barlow's aircraft was shot down over Holland outbound and his name is on the Runnymede Memorial. We both are unclear what Dad did after that. I thought that he said he did a complete tour and about eight extra trips. Perhaps he did some more ops with 50 Squadron. It was suggested that he had done enough by his CO Wing Commander James 'Jimmy' Flint to focus on training the next batch of new navigators. I understand he was given this role as an acting Squadron Leader but could not attain the rank as a VR (Voluntary Reserve). One duty he did not enjoy was telling wives and girlfriends their partners had 'bought it' in the last raid. Lastly, he played a lot of tennis and golf on and around his base. As an aircrew member he developed long lasting friend ships after the war. Although a Flt. Lieutenant he would often go into the sergeant’s mess as he said it was more fun. He became one of the founding members of the 50 / 61 Reunion Association, being Hon. Secretary for many years. He was also a founder member of the RAF Lodge. He lived with the memories, good and bad, of the RAF war years, for the remainder of his life, but will always remember the companionship and those that lost their lives. 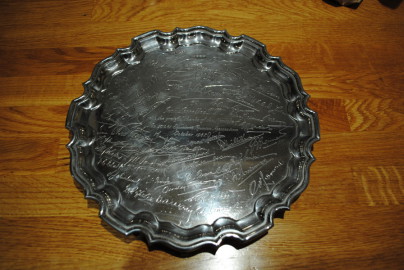 Flt Lt Jack Lascelles DFC was a founder member of the Association and its Secretary for many years. A silver salver presented to him in October 1967 by the Association. It was presented to him at the Olde Cock Tavern in Fleet Street, London. I recall being the newly qualified chauffeur driving Dad’s big white ‘Z Car’ that evening to bring Dad and Jim Flint back to Catford where we lived in those days. In sorting out Mum’s bungalow my brother Alan (or ‘Half Pint’ as Jim used to call him)