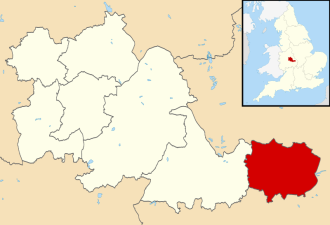 William Grantham was born in Coventry, Warwickshire, in the suburb of Stoke. He was the son of Job and Susan Ada Grantham, and known to his friends and family by the nickname ‘Ted’ and was the third of five brothers. The family lived at 107 Bulls Head Lane, in the Suburb of Stoke, Coventry.

A picture of Bulls Head Lane before the war. 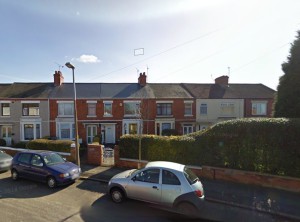 The family home today (behind the white gate) 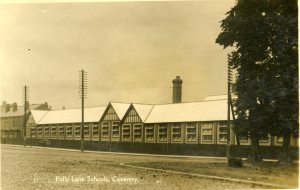 Ted’s early education was at the local Folly Lane School. He was later selected for a scholarship at Bablake Grammar School for Boys, where he studied between 1932 and 1936. After leaving school in 1936, he took up an Engineering apprenticeship with the large Coventry machine company, Alfred Herbert Machine Tool Company, until 1939. 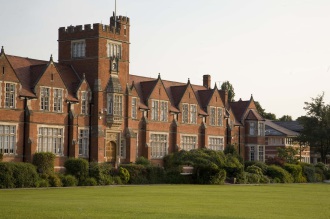 Ted’s younger brother Robert (Bob) recalls that he was played the accordion and was a keen fisherman. 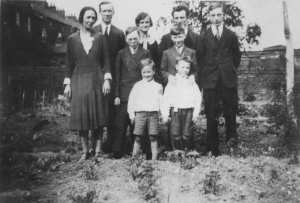 At the age of 18, with the War approaching, Ted enlisted in the RAF Volunteer Reserve (RAFVR) on 16th December 1938, with the rank of Aircraftsman second class, and it wasn’t until September 1939 that he was called to start his training at the Coventry Training Centre – RAF Ansty.
The following month he transferred to No 1 Initial Training Wing (ITW), Cambridge, where training would have included drill, marching and lectures as well as guard duty around the University campus. Grading courses were also undertaken to determine suitable candidates to be sent on the Empire Air Training Scheme.
Next stop, in March 1940 was No 2 Recruitment Centre (RC), Cardington, where recruits had training in drill, physical training, anti-gas training, education, aircraft handling and musketry.

Whilst returning on leave, Ted and his best friend Dennis Emms were thrown from a motorbike, and Ted suffered a broken leg. A period from November 1940 to June 1941 was spent in hospital both in Coventry and at RAF Halton, followed by a period convalescing in Blackpool. Ted then had to repeat his early periods of training. He attended the Air Crew Reception Centre at Lords Cricket Ground from September 1941, followed by No 11 ITW in Scarborough (September 1941) and No 15 RC in Blackpool (January 1942).

Finally, in February 1942, Ted departed to join the Empire Air Training Scheme in South Africa, commencing with No 75 Air School (AS) at Lyttleton, Pretoria for Initial Flying training, believed to be gliders.
On 23rd May 1942, Ted was then posted to No 2 AS at Randfontein, for Elementary Flying, using Tiger Moths, and finally on 5th September 1942 he completed his oversees training at No 24 AS, Nigel, Dunnottar, a Service Flying school where the Aircraft were Hawker Hind/Hart.

According to family lore, it is said that while in South Africa, Ted had a girlfriend. 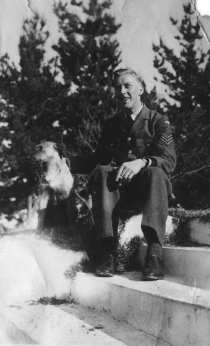 Ted during his training in South Africa.

On his return to England, Ted was posted to No 7 Personnel Reception Centre (PRC) in Harrogate. This was a holding centre for all the trained recruits, awaiting postings for bomber training.

This opportunity came to Ted in June 1943, when he was posted to No 14 (Pilots) Advanced Flying Unit ((P)AFU) at RAF Banff, Scotland. Here, he was introduced to heavier aircraft, in this case the Airspeed Oxford, as well as continued classroom based lessons, flight simulation and here, he would have completed his final tests and examinations to receive his Wings.

In August 1943, Ted was then posted to No 29 Operational Training Unit (OTU) at RAF Bruntingthorpe. Training here was with the Vickers Wellington. Here, Ted would have met some of his future Lancaster crew. The first recorded flight with his future Navigator, William ‘Billy’ Hobbs, was on 3rd October 1943 for High level bombing practice. Exercises at this training unit included fighter affiliation, circuits and landings, cross country, bull’s-eye practice and carrying full bomb loads and were carried out in both day and night conditions, as they prepared for the missions that would follow with 61 Squadron.

In January 1944, they moved on to 1661 Heavy conversion Unit (HCU) at RAF Winthorpe. Here, the full crew practiced together in the Short Stirling heavy bombers. At this point Ted received a promotion to Flight Sergeant and exercises in the aircraft commenced on 4th February 1944. Below is a picture showing Ted and his crew at this time. This is the complete crew that carried through to 61 Squadron, flying all their missions together. 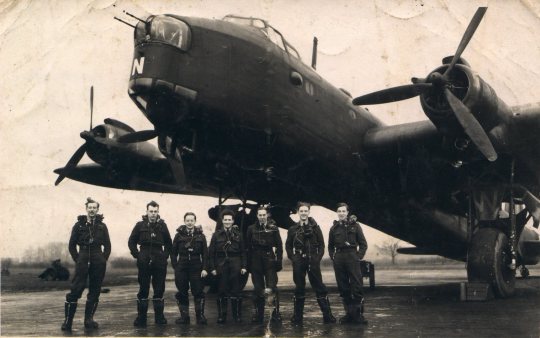 On 10th February 1944, Ted was discharged from the RAF and the following day was appointed to his commission with Bomber Command. On 15th March 1944, Ted and his crew moved on to their final training unit at No 5 Lancaster Finishing School (LFS) at RAF Syerston. Ted received a further promotion to Pilot Officer.

Early in April 1944, the crew were posted to No 61 Squadron at RAF Skellingthorpe. Further exercises followed before Ted went on his first mission on 11th/12th April as second pilot (his second Dickie flight) – common practice to get rookie pilots used to the conditions they would experience with their crew.

The crew flew on twenty four successful missions up to 5th July 1944, almost completing their tour.

On the night of 7th/8th July 1944, the crew would not return from their second mission bombing the V1 installation at St. Leu d’Esserent in Lancaster ND867, where they were shot down near the village of Moliens at about 1.45 in the morning. Residents who saw the bomber fly over the village in flames, found that Ted had kept the bomber in the air so that it crashed just outside the village. There had been no time to parachute.

Ted and 4 members of the crew are buried in the village of Moliens, whilst 2 escaped as the plane was crashing. Cliff Young evaded capture, and Geoff Berry spent the rest of the war as a POW. Peter Baigent also jumped from the aircraft but his parachute failed to open.

Following the notification to his family of his death, Ted’s eldest brother Dennis travelled to RAF Skellingthorpe to collect his effects, which included their father’s car that Ted had been using – as an RAF officer he would have enjoyed extra fuel rations.

Ted’s death must have hit the family hard, coming exactly a year to the day that his father was killed whilst riding to work in the blackouts. 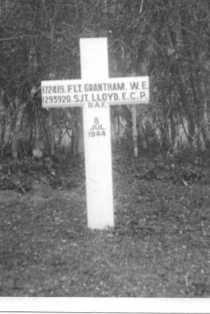 The original grave marking in Moliens. 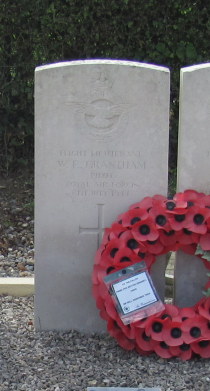 We are indebted to Ted Granthams Nephew Neil Grantham for compiling this story for us.