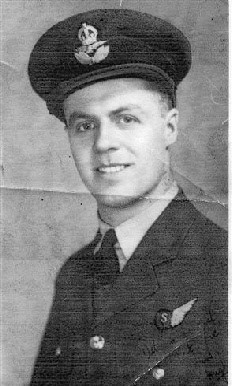 Hugh reported to the Aircrew Reception Centre in St Johns Wood in April '43. After about a month he was posted to No.19 Initial Training Wing (ITW) at Bridgnorth, Shropshire where his initial training started. After about two months he went to No 2 Radio School, Yatesbury, Wiltshire to start his radio training, the latter part training in De Havilland Rapides and Percival Proctors.From there he was posted to Bishops Court, Northern Ireland, No 7 Advanced Flying Unit to carry out more radio work in Avro Ansons. There he received his S brevet as a sergeant. On 18th February '44 he accepted his commission and posted to No 14 Operational Training Unit (OTU) Market Harborough to join the 5 man crew flying Vickers Wellingtons in many different types of exercises before going to 1654 Heavy Conversion Unit at Wigsley where they flew Short Sterlings with the addition of a Flight Engineer and Mid Upper Gunner before transferring to No 5 Lancaster Finishing School (LFS) at Syerston. Finally, at the end of February '45 they were posted to No. 61 Squadron at Skellingthorpe where, after initial further acclimatisation, they started operations, the first on 7th March to Harburg oil refinery. After a further 8 ops they were posted to No. 44 Squadron where they were engaged in the transport of Pow's from Brussels and Operation Dodge bringing home 8th Army soldiers from Bari, Italy.