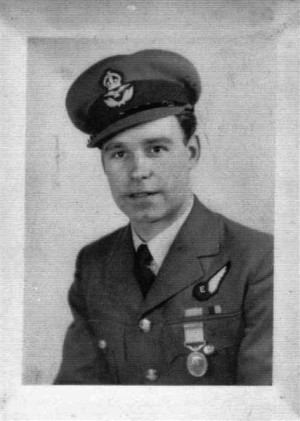 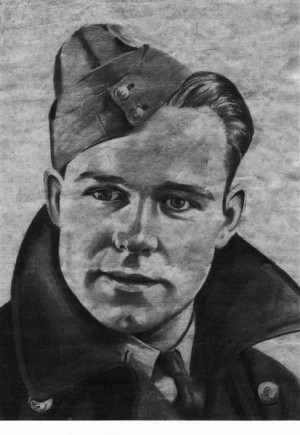 This striking portrait of Sgt. Mullins was produced in 1943. 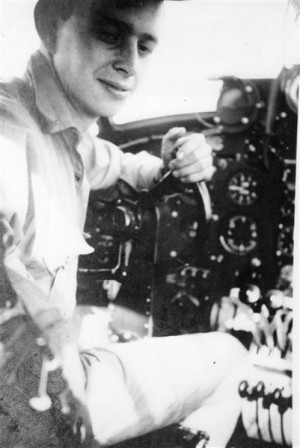 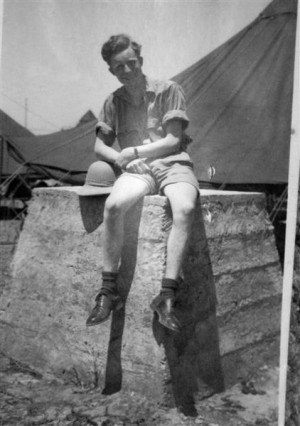 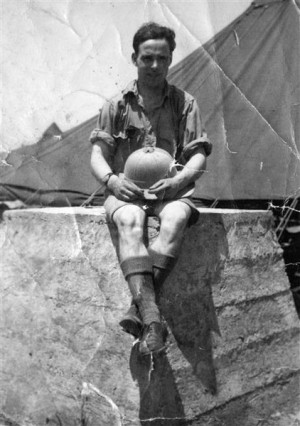 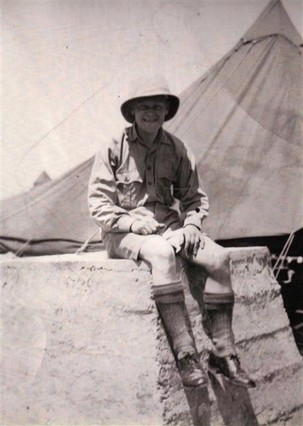 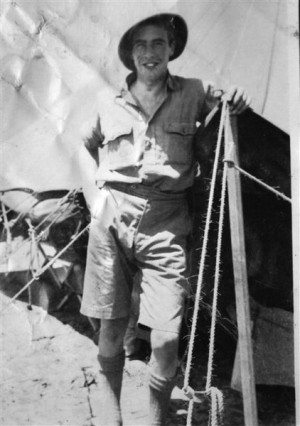 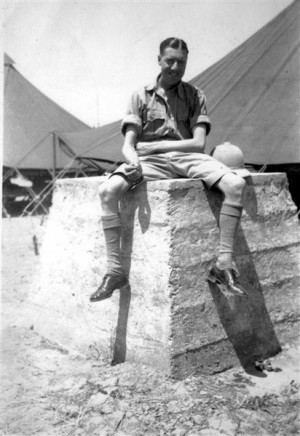 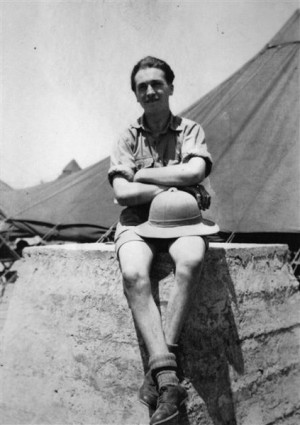 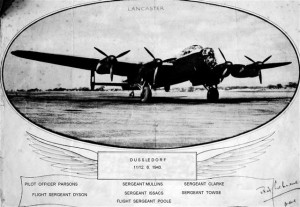 they took part in Operation Bellicose.

The Operation Bellicose strategic bombing in World War 11 targeted the Nazi Germany Zeppelin Works and the La Spezia, Italy, naval base and was the first use of shuttle bombing in World War 11 and the second use of a Master Bomber in early June 1943, a Central Interpretation Unit photo interpreter (Claude Wavell) identified a stack of ribbed baskets (Wurzburg radar reflectors) at the Zeppelin Works. After Winston Churchill viewed the photos at RAF Medmenham on June 14, No. 5 Group RAF received the surprise orders on June 16 to attack Friedrichshafen during the next full moon. 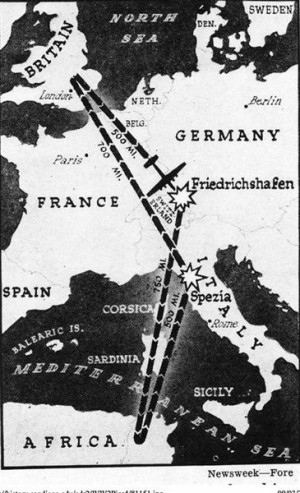 After take-off from Britain, the Avro Lancasters bombed from 15,000 ft rather than the planned 10,000 ft. due to heavy flak. First the Pathfinder Force (PFF) dropped offset markers at a distance from the target for the main bombing force to use unobscured by smoke. the second stage was to use 'time-and-distance bombing runs' from a location on the Lake Constance shore along a measured distance to the target.

The attack hit the V-2 rocket facility of the Zeppelin Works, which made Operation Bellicose the first mission that bombed a long-range weapon facility.

From Friedrichshafen the planes refueled at Bilda, Algeria in North Africa. 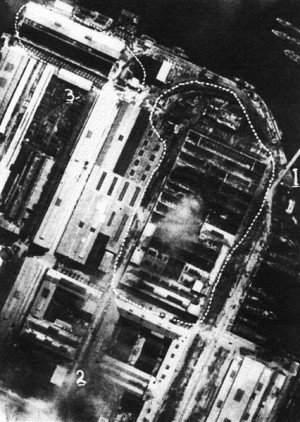 On June 23/24, eight of the original Operation Bellicose force of 60 Avro Lancasters remained in Algeria for repairs, and the remaining 52 bombed the Italian naval base at La Spezia, Ligura, damaging an "oil depot" and an "armaments store", and continued to Britian without loss. 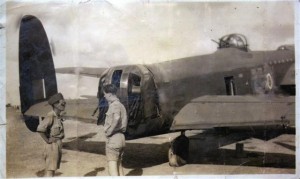 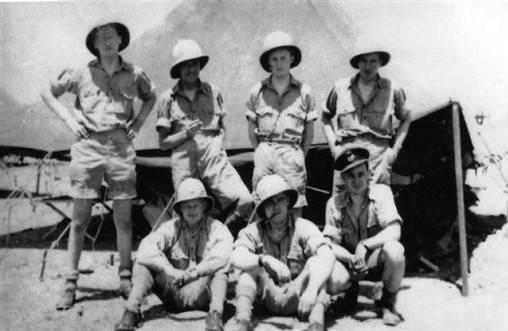 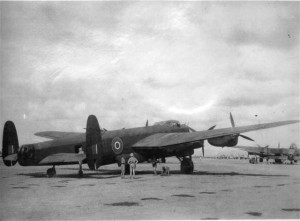 On the 9th July 1943 P/O Parsons and crew took part in a bombing operation to Gelsenkirchen. QR-L was their aircraft. As this was their 30th operation it marked the end of their lst tour of operations. Unfortunately Bob Dyson Nav. was killed by enemy flak' during this operation.

Attacked a release point flare at 21,000 ft. On returning encountered heavy flak 5-10 miles south of BONN, and in course of defensive action the navigator was hit by the only fragment of shrapnel which penetrated the fuselage, and died shortly afterwards, with wireless operator and the second bomb aimer, who carried out rough navigation, P/O Parsons brought the aircraft safely back to Man 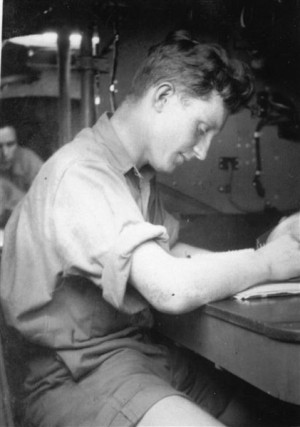 Bob Dyson at his navigator's desk.

Shortly after this photo was taken Dyson was killed when a piece of flak penetrated the fuselage.

Below are two edited extracts of stories which F/L Mullins told his son, Colin.

On one occasion, after a night operation, dawn was just breaking as we entered the circuit over Syerston.

After waiting our turn we touched down.

At the time all our systems were working OK.

When halfway down the runway, without warning, our undercarriage suddenly collapsed.

We all held on for our dear lives as the aircraft careered along the runway on it's belly.

GOSH IT WAS FRIGHTENING!!

Opposite the seat where I sat was a bar on which I used to put my feet during a rough flight. As we skidded along the runway, I put so much pressure on this bar that it bent in the middle.

AND IT WAS A THICK BAR TOO!!

We skidded off the end of the runway right into the middle of a potato field.

Potato pickers ran for their lives as our out of control aircraft skidded amongst them.

Loose potatoes flew like missiles in all directions, some splashing against the aircraft fuselage and windscreen.

We finally came to a stop in the middle of the field.

Whilst crossing the channel from another bombing operation I noticed the hydraulic pressure was low and that the system seemed to be a bit sluggish, so I went down the aircraft and checked the hydraulic accumulator, I found that there was no oil in there. Some of the hydraulic pipes must have been damaged by the flak that we had passed through earlier. This meant that the undercarriage could not be lowered.

With no oil available to fill the accumulator, replacement liquid just had to be found to fill it, the dregs of flasks, soup and all available water were tipped in, afterwhich there was just enough pressure in the system to operate the landing gear.

We landed safely in one piece.

Our poor old ground crew had to work all night to repair the system and to then flush out coffee, tea, soup, etc. from the pipes.

Needless to say I was very unpopular with our ground crew for sometime for contaminating the hydraulic system in this manner, however, they did not know the pressure we were under during night operations.

They did a good job and we were back on operations soon after.

If no liquid had been found to fill the hydraulic accumulator they would have had to make a crash landing.

Sgt Mullins must be commended for his actions, as, under operational pressure, when it seemed that the captain would have to make a wheels up crash landing, his simple remedy enabled the aircraft to be landed safely.

Being able to think on his feet like this was obviously the reason why he was held in such high esteem by his captain. 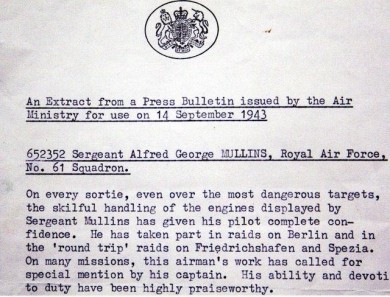 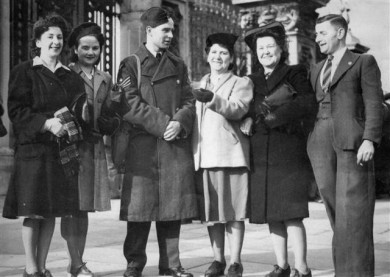 F/Sgt Mullins and family outside Buckingham Palace after receving his DFM.

23 July 1943: With lst tour of operations completed F/Sgt A.G. Mullins moved from 61 squadron to No 81 OTU. School of Air Sea Rescue at Calshot, training new crews in the art of ditching in the sea and survival.

He was Commisioned Pilot Officer on 9 December 1943.

He was discharged from the RAF on 4 February 1946.

He relinquished his commission on lst July 1959 retaining the rank of Flight Lieutenant.