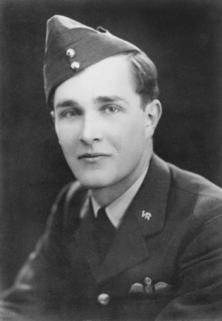 Leslie Thomas Manser was born in New Delhi, India during his father's employment as an engineer with the Post and Telegraph Department and, when the family returned to England, they settled in Radlett, Hertfordshire. He was a student of Victoria Boys' School, Kurseong, Darjeeling and Aldenham School, Elstree, Hertfordshire. He was accepted by the Royal Air Force in August 1940, and Manser was commissioned as a Pilot Officer in May 1941. After a navigational course and final operational training at 14 OTU, RAF Cottesmore, he was posted to No. 50 Squadron (which was operating the Handley Page Hampden) at RAF Swinderby, Lincolnshire on 27 August 1941.

Two days after joining his squadron Manser experienced his first operation: as a second pilot, he took part in a bombing raid on Frankfurt on 29/30 August 1941. During the next two months he flew six more sorties, those operations were;

Being posted to 25 OTU, Finningly on 7 November 1941 and a month later posted back to 14 OTU as an instructor.

Manser served briefly with No. 420 Squadron RCAF (Hampdens) from March–April 1942 when he rejoined 50 Squadron then operating from Skellingthorpe, and converting to the new Avro Manchester heavy bomber. His first trips on returning to the squadron were in Hampdens, a leaflet drop over Paris and a Gardening trip. He flew a further six sorties during April and May. His operations were;

Manser was promoted to Flying Officer on 6 May.

For the 1,000 bomber raid on Cologne on the night of 30 May 1942, Manser was captain and first pilot of Avro Manchester bomber 'D' for Dog. He took off from RAF Skellingthorpe at 23.01 hrs.

As he came over the target, his aircraft was caught in searchlights and although he bombed the target successfully from 7,000 ft (2,100 m) instead of the briefing height of 12,000 ft, it was hit by flak which blew off part of the bomb bay doors. In an effort to escape the anti-aircraft fire he took violent evasive action, this reduced his altitude to only 1,000 ft (300 m) but he did not escape the flak until he was clear of the city. By this time the rear gunner was wounded, the front cabin full of smoke and the port engine overheating. Rather than abandon the aircraft and be captured, Manser tried to get the aircraft and crew to safety. The port engine then burst into flames, burning the wing and reducing airspeed to a dangerously low level. The crew made preparations to abandon the aircraft, by then barely controllable and a crash inevitable. The aircraft was by now over Belgium and Manser ordered the crew to bale out, but refused the offer of a parachute for himself. He remained at the controls and sacrificed himself in order to save his crew. As the crew parachuted down they saw the bomber crash in flames into a dyke at Bree, 13 mi (21 km) north east of Genk in Belgium.

P/O Barnes was taken prisoner, but Sgt Baveystock, P/O Horsley, Sgt King, Sgt Mills and Sgt Naylor all evaded capture and made their way back to the UK. The testimonies of the five evaders were instrumental in the posthumous award of the VC.

The citation for the VC read: "In pressing home his attack in the face of strong opposition, in striving, against heavy odds, to bring back his aircraft and crew and, finally, when in extreme peril, thinking only of the safety of his comrades, Flying Officer Manser displayed determination and valour of the highest order."

Manser was the brother-in-law of British Army Captain John Neil Randle who was posthumously awarded the Victoria Cross in 1944.

On 31 June 2004 a Memorial to F/Off. Leslie Manser VC., RAFVR. 50 Squadron - Royal Air Force was unveiled in natural domain the "Zig", Stamprooierbroek near Molenbeersel, Kinrooi in the north-east of Belgium.

His VC is on display in the Lord Ashcroft Gallery at the Imperial War Museum, London. 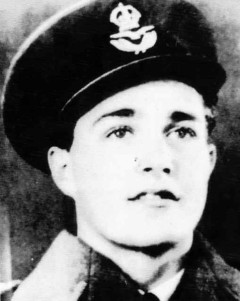 He was awarded the Victoria Cross posthumously on October 20th 1942.