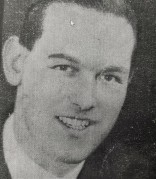 Charles William Clarke came from Southampton, his parents were Charles and Johan Clarke and he was one of eight children. A pupil of King Edward VI school Southampton (Watts House) 19 09 22 to 29 07 27). Married to Kathleen Mary Clarke on 26 June 1937. They had a daughter Dianne. He enlisted early 1941 and his first posting was as 1185390 AC2 Clarke to Flight 10A of No.1 Receiving Flight at Babacombe in Devon. His next move was to No.5 Initial Training Wing in Torquay.

Following his basic training, having volunteered for aircrew L.A.C Clarke went to No.5 Service Flying Training School at Brantford, Ontario, Canada. His next move was to No.5 Air Observer's School at Stevenson's Field near Winnipeg, Manitoba. His final duty in Canada was to No.7 Bombing and Gunnery School, Paulson, Manitoba.

Returning to the UK as a Sergeant he was sent to No.2 (Observers) Advanced Flying School at RAF Millom, Cumberland.

July 1942 he started his operational training at No.16 Operational Training Unit as RAF Upper Heyford. Here he crewed up with five of the final crew training on Wellingtons. 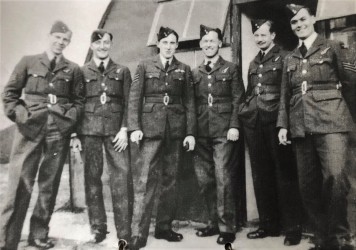 Following his OTU training he was sent to No.49 Conversion Flight at RAF Scampton and it was here that they picked up two more members of the crew, a flight engineer and another air gunner to make up the 7 man crew of a Lancaster. Six are shown in this photo with C W Clarke third from the right with the pilot Sergeant F H Huntley to his right. 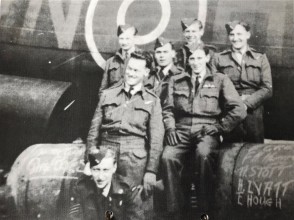 The crew were then posted to RAF Skellingthorpe on 10 November 1942 for the start of their operations. The picture left shows them next to VN-H.

On Wednesday the 25th Nov the crew took part in a cross country training flight. Skellingthorpe-Newbury-Taunton-Norwich. Flight was mainly above cloud base with clouds as far as one can see. Due to being unable to land as Skelly they were diverted to a different base. With the poor visability it was a difficult landing with the undercarriage collapsing stopping with a sickening crunch, all the lights went out and all the crew evacuated as quick as possible. Returning later to collect kit. The bottom of the plane and the props were all bent up with the aircraft being written off. The pilot will have to attend a board of enquiry having written of £100,000 of aircraft.

His tour of operations commenced on 6/7 December. the notes against some of the operations refer to excerpts from his letters home.

Extract from letter after 2nd Turin raid. If all tours are like this you will have nothing to worry about and neither will I.

Note from letter this was recalled half way to the drop point and we returned to base. When the found out we still had the mines on board they told us to return to sea and drop them in deep water. On the way back again an engine failed but we managed to land safely on the three.

Daily routine; 09:45 all crew to briefing room for lecture. Return to aircraft to test in the air back in time for Lunch. Navigators to briefing for tonight raid before the rest of the crew to enable routes to be plotted.

Extract; Munich was covered in low cloud and we bombed on to existing fire we could see through the clouds. Flack was light there and back. Skelly was low visibility and we were diverted to middleteon st George. 9 days leave over the new year

Extract; Our rear gunner is in hospital with tonsillitis. We had a replacement rear gunner but he couldn’t fir in the rear turret, he was a big chap and had a lot of flying gear on. Our mid upper gunner could not get into the rear turret either. So we had to wait until another Squadron gunner came along. The reason they were wearing so much gear is because we were flying at 20,000 feet mostly at -30C. I was quite warm in my cabin.

Extract: on the way to Berlin one of our engines played up, so we had to return to base dropping our bomb load in the North Sea. 22 Bombers were lost on that raid.

Extract plane diverted to Raf Topcliffe due to poor weather at skelly. Took of skelly but no landing again due to weather, this time we were diverted to Waddington.

Extract; Next trip is number 13

Extract; trip 20 completed 10 to go. Went to RAF Waddington to see the group captain reference my commission and he is willing to put it forward to command.

Extract good raid and flew low back over France at 300ft. Gunners had fun shooting up trains and cars. Went to group HQ and had an interview with Air Vice Marshall Sir Charles Coburn and he has approved my commission.

Extract.  We had to land away from base and returned at tea time.

On 2nd May he wrote that that the pilot had been awarded the DFM and the mid upper Gunner the DFM. The bomb aimer, wireless operator and me all have their commissions coming through.

The Operational Record Books list all the crew as sergeants, However the commissions had come through for Huntley, Clarke and Hough. They were commissioned as Pilot Officer's.

On the night of the 12 May 1943, Lancaster W4762 took off from RAF Skellingthorpe at 23.58 to bomb Duisburg.The operational Record Book states "This aircraft was detailed to attack the above named target, but after take off no message was received and the aircraft failed to return. Presumed missing due to enemy action".

William Chorley's Bomber Command losses quotes, "Shot down by nught fighter and crashed 03.32 in the Ijsselmeer, 6Km NW of Nijkerk. Three lie in Amsterdam New Eastern Cemetery; four rest at Amersfoort (Oud Leusden) general Cemetery, while Sgt Ivatt has no known grave. Both P/O Huntley, a Kings Scout and Sgt Stott won their DFMs for outstanding fortitude and skill during operations to Stettin in April. Details were Gazetted on 25 May 1943. F/O Priestley was flying as second navigator".