Former President of the 50/61 Squadrons Association

He Completed a tour of operations

Sir Michael born 1923 served as a Flight Lieutenant Bomber Pilot on 50 Squadron during WW11. During the Battle of Berlin he flew his Lancaster on 10 bombing missions over Berlin. In a raid over Augsburg he lost an engine. He survived the infamous Nuremburg Raid during which Bomber Command suffered its heaviest losses of the entire war.﻿

In February 1944, whilst on a training flight, one of his aircraft engines caught fire. Beetham bailed out landing near RAF East Kirkby. Sadly two of his crew members lost their lives during the crash. 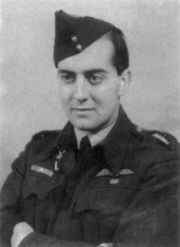 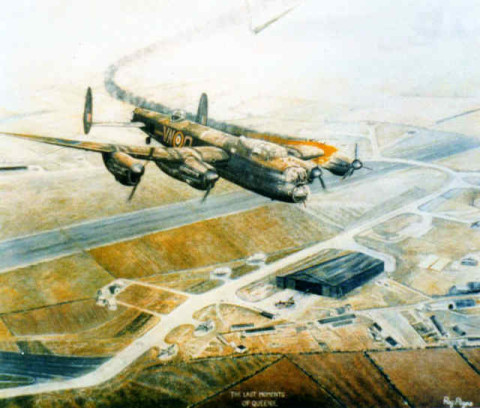 The last moments of Queenie

Copy of a painting by Reg Payne: its Wireless Operator at the time, with it's port outer engine blazing, moments before the port wing fell off, it then crashed to the ground near East Kirkby.

On the morning of 12 of Feb 1944 F/L Beetham and crew along with additional aircrew; P/O Jennings Pilot RAAFand his two gunners, Sgt Puddock and Sgt King, took off from RAF Skellingthorpe for what should have been a short routine training flight. Later, over Yorkshire, they rendezvoused with a RAF Spitfire for Fighter Affiliation. The flight plan was to fly over the Humber Estuary at 6,000ft and meet up with a Spitfire over South Yorkshire for a 40 minutes Fighter Affiliation exercise.After making contact with the Spitfire F/L Beetham then spent 20 minutes violently diving, rolling, climbing, in what is called corkscrewing, as his gunners practiced aiming at the attacking fighter. P/O Jennings and his gunners then took over so that they could share the practice time. Just as P/O Jennings had completed his first corkscrew there was a shout of "PORT OUTER ON FIRE". Immediately the engine was shut down and fire extinquishes used; the fire then disappeared, however, the fire reappeared after the fire extinquisher had emptied.With the fire once again burning furiously and with the wing in danger of dropping off the order to bale out was given.At the time Reg was up front and could see the large engine fire rapidly spreading along the wing. Knowing it wouldn't be long before the wing broke off he quickly made his way along the fuselage to the door where he found several crew members preparing to bale out. ........As there was a very big danger of hitting the tailplane when baling out of a Lancaster fuselage door, it was important that the correct procedure should be followed. It was; Sit down, put your head between your legs, then fall sideways'........ Jock the mid-upper-gunner was the first to bale out, however, he jumped with his helmet still on and with his intercom lead still plugged in. The lead jammed in the door; this could have easily hanged him, luckily it pulled the helmet straight off his head, his body then hit the tailplane wrapping around it; the force of the slip stream holding him tight against the tail plane. Wasting valuable seconds the other crew members watched as he remained trapped, suddenly to everyone relief his parachute spilled out dragging him away. Reg was the next one to bale out, so, making sure that he had taken up the correct sitting position he dropped sideways out of the door, amazingly the slip stream just threw him back again inside the fuselage, someone then gave him a good push and he dropped away. Just before he jumped Reg couldn't help thinking about that cold February North Sea down below.As he quickly dropped away he tried to pull the ripcord but nothing happened, 3,000ft later as he entered clouds he realised that he was pulling hard on the carrying handle, so, making a determined attempt he located and pulled the ripcord, how relieved he was to feel the jerk of the parachute as it rapibly unfurled above him. Alarmingly his body was then almost dragged out of his loosely fitted harness, quickly he dragged it back around his body. ....I bet that taught him to fit his harness correctly !!!. Looking up he then saw a part of the outer wing swinging backwards and forwards as it floated down, fortunately drifting safely by him. Looking around as he parachuted down out of the clouds he then saw a large flash as Queenie hit the edge of RAF East Kirkby airfield. Luckily Reg managed to make a landing on the soft soil of a ploughed field. As he landed he heard a loud bang and a scraping sound as one of the other crew member's landed in a clump of nearby trees. Later he was to hear that the parachutist was P/O Jennings and that he had to be taken to hospital scratched and shocked.In the East Kirkby mess a pilot; who had been in a nearby Lancaster told him that he was shouting to himself "BALE OUT, BALE OUT, CAN'T YOU SEE THE WING'S ABOUT TO DROP OFF". The pilot then went on to say that he had seen bodies flying out in all directions and that he knew one had been killed because he had seen him drop into the clouds without a parachute. Reg was able to tell him that he was in actual fact that person

The photo below was taken just before the 'Queenie' incident; 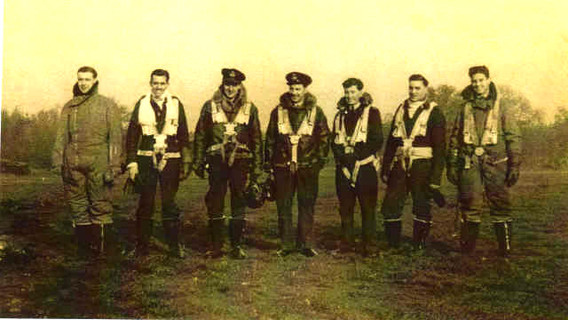 Would it not have been ironic if this simple little training exercise had prematurely ended the career of the distinguished RAF Officer who we now know as Marshal of the Royal Air Force Sir Michael Beetham. 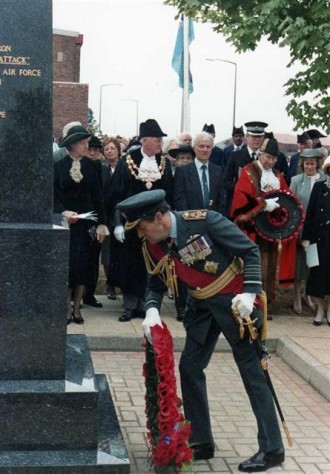 Sir Michael lays his wreath at the Birchwood Memorial 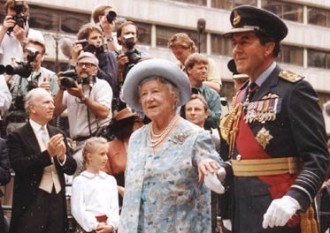 We are sad to report the passing of our President MRAF Sir Michael Beetham.