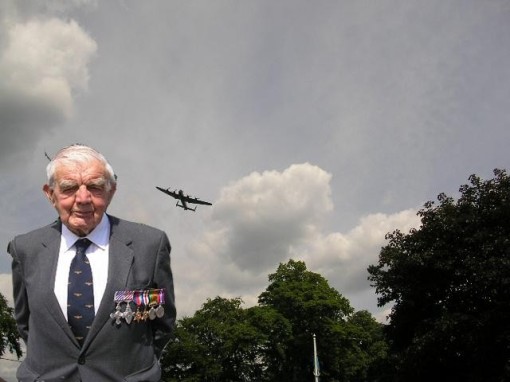 Their aircraft was holed by a bomb over Duren and returned on two engines; it was involved in a mid-air collision with a Huricane; the starboard engine was completely destroyed (both incidents were friendly fire); there was no radio reception; and the aircraft also suffered flak damage.

3rd September 1939: joined the RAF at Halton as an apprentice fitter.

With 1500 other apprentices he completed the course and was awarded the Educational Award for that entry.

From there he was posted to 266 Squadron at Wittering, Stamford.

The next morning, whilst walking to the ablutions hut with other maintenance crew members, Dorniers bombed the station. They threw themselves to the ground as bombs exploded nearby.

The airfield was devastated and 266 was moved the next day to Hornchurch.

As soon as he was 18 he volunteered for pilot training and was accepted, however, he did not begin until January 1942.

Training started at St Andrews, then Perth where he flew Tiger Moths. He flew solo after 7 hours instruction. 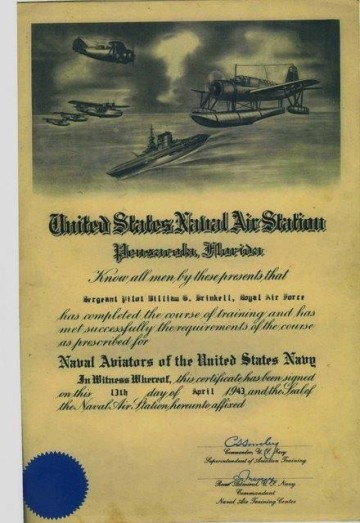 Finally he flew the Catalina flying boat with an eventual "flying boat" posting. He then had to do a Reconnaissance Course at Prince Edward Island, Canada, where, on 26th April 1943 he was awarded his wings.

He was then posted back to England, expecting to be posted to a flying boat squadron, however, with Bomber Command suffering heavy bomber crew losses, he was posted into bombers. 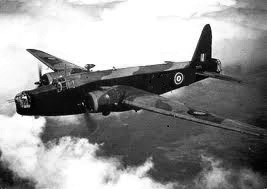 First he converted to the twin engined Wellington bomber, then it was to Stirlings and then on to Lancasters. 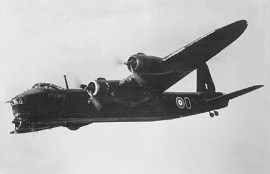 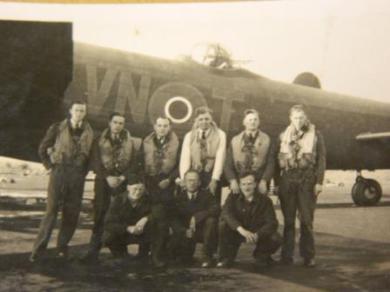 This picture, of the crew and ground crew in front of VN-T was sent in by the Grandson of LAC Ronald Schofield, shows him squatting centre in front of Bill Drinkall.

(Thanks to Chris Emerton)

All Bomber Command aircrew believed it always happened to the other chap. Bill and his crew being no exception. They regularly practised dingy drill and also clearing the aircraft on the ground. They got it down to 11 seconds from the word 'go'. Bill, as Captain, was always the last one to leave.

Before an operation they made sure that they had their best 'bib and tucker' on, clean clothes and well shaved. First aid escape if shot down; secondly to be well clad if ending up in a prison camp. There was a pecking order for climbing into their Lancaster on every raid. Bill was the first and then others in the same order. Nobody decreed that this should be so, but it was adhered to rigidly, a kind of ritual. Some of the crew had personal superstitions. The mid-upper gunner always carried a medallion that had been given to him. The navigator made a point of never looking out at any target, he always drew his curtain. He always wore water boots when they crossed the North Sea; if it was a short crossing of the Channel he wore shoes. Despite these ideosyncrasies he was an excellent navigator. The bomb aimer always placed his parachute under his thighs during the bombing run.

Bill and crew went solo in a Lancaster on September 5th 1944 and six days later were posted to 50 Squadron at RAF Skellingthorpe. They arrived at 4.00pm and were flying on their first operation that same evening to DARMSTADT, just south of Frankfurt.

In the course of four weeks during January and February 1945, they made three attacks on Oil Refineries at Poltz. Each trip taking up to ten and three quarter hours flying time.

Their 30th, and last operation was to WURBURG.

Extract from Recommendation for the Distinquished Flying Cross.

FLIGHT LIEUTENANT DRINKELL was detailed to attack Duren in daylight on 16th November, 1943 and whilst on the bombing run, his aircraft was hit by a falling bomb which passed through his mainplane and No. 2 petrol tank. The petrol streaming from the tank immediately caught fire, and with great presence of mind he feathered both starboard engines, and, regaining control of the aircraft carried on with his bombing run and bombed his target successfully. On returning from the target Flight Lieutenant DRINKELL could not maintain height on two engines due to the excessive drag from the starboard wing, and when the aircraft had lost height down to 2000 feet he was faced with the alternative of bailing his crew out thereby losing his aircraft with the grave possibilty that his crew would be captured, or, restarting the starboard engine to give extra power necessary to maintain the aircraft in the air. With the crew standing by with parachutes on and ready to abandon the aircraft if necessary, he restarted the starboard inner engine satisfactorily, and returned without damage to the aircraft making a normal landing. 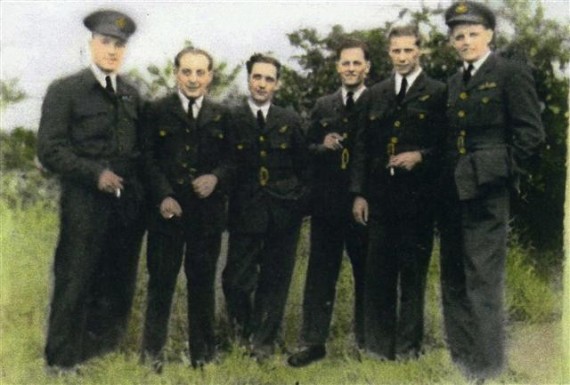 From June 1946 F/L Drinkell was employed as lst Pilot on communications duties with No. 1315 Flight at Iwakumi. Whilst serving there he was awarded the AFC .

Over Japan recently an RAF Dakota found and "homed" six R.A.A.F. Mustangs threatened with disaster by bad weather. The Mustangs had taken off from Iwakuni in fair weather for Borfu when a severe storm broke over both airfields. Their radio could not be heard but ground stations could be received; thus, it was impossible to help. As darkness approached the Dakota, flown by F/L. W. G. Drinkell D.F.C., was about to land at Iwakuni when he heard the Mustang pilots requesting bearings. He climbed to 6,000ft above rain and cloud, re-transmitted bearings for the Mustangs and instructed them to rendezvous with him. Three were successful and were escorted to Milo. The Dakota then flew back in darkness, and, with the aid of ground bearings and Very lights, managed to rendezvous over Hiroshima with two of the Mustangs, while the third was in sight five miles off. Cloud had now closed over Miho, and the "Dak" descended on instruments, with two Mustangs in close formation. Within a few minutes the last Mustang had made a safe instrument landing.

Bil's marriage was a true love story in itself which started when she sat in the co-pilot's seat of his Dakota. At the time Miss Lilias Blaen, who came from Creo Town, Kirkcudbrightshire, Scotland, was an RAF Nursing Sister (Princess Mary's) serving at the main BCAir hospital, at Iwakuni on Honshu Island (only a few miles from Hiroshima).

On a Saturday in June 1946 she was part of a medical team sent to escort a badly injured army officer from Honshu Island to BCAir hospital.

F/L Drinkell was the pilot of the Dakota aircraft used to convey the party to hospital.

With no time for Bill and his crew to rest, clean up or have a meal after the long hazardous flight which they had just completed, they rushed back to their aircraft to carry out this emergency duty. During the flight Sister "Sally" Blaen was invited to take the co-pilot's seat, where she became acquainted with, F/L Bill Drinkell. He recalls: "I don't think she was much impressed by the dishevelled appearance of the crew, nor by the answer to her enquiry as to when we would arrive - "The sandwiches are finished, so we must be almost there", He, however, admired both her aplomb as they landed in the dark on a poorly equipped airfield, and the calm, efficient way she handled her patient. There friendship developed from that beginning and on East Sunday, 6th April, 1947 Sally Blaen became Mrs Drinkell.

They married in Japan where she was given away by Group Captain D. D.Christie AFC, Miho Station Commander.

The bridesmaid was Sister Sybil Woods and the best man was S/L Warren DFC.

The whole station celebrated their marriage. 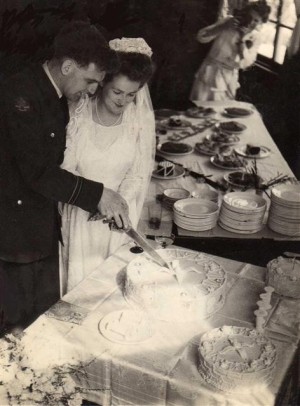 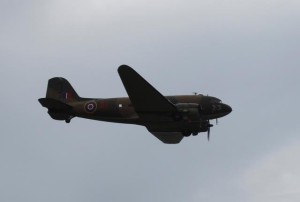 Bill's Dakota, which, incidentally, carried her intitials, and honeymooned at the Kawana Hotel

After 30 years service with the RAF Bill retired, afterwhich he went out to the Middle East as an instructor to the Saudi Arabia Air Force. 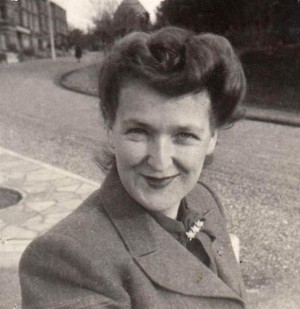 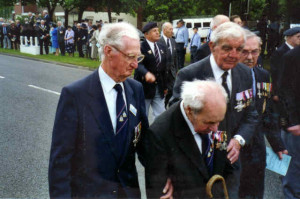 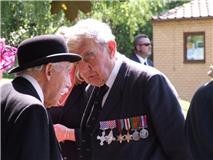 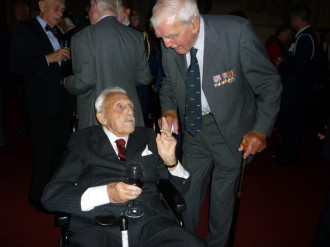 Bill meets up with Jimmy Flint at Bomber Command Memorial Unveiling on 28 June 2012.