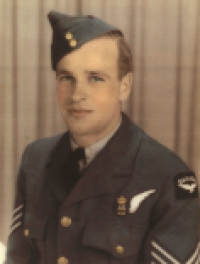 Born 8 September 1940 to Fred and Ruby Thibedeau. He was married to Vera Thibedeau (Nee Osborne). A son was born to them on 27 July 1941, Ivan William Frederick Thibedeau. Before joining up he worked as a Machine operator

He volunteered for aircrew duties and enlisted on 1 October 1942 at North Bay Ontario.

He started his flying trainining at No.9 Bombimg and Gunnery School at Mont Joli, Quebec.

Arriving in the UK on 12 August 1943 he arrived at No.17 Operational Training Unit at RAF Silverstone, from there to 1654 Conversion Unit and finally to No.5 Lancaster Finishing School at RAF Wigsley. Roy Thibedeau was posted in to No.61 squadron on 31 January 1944.

It wasn't long before he started flying on operations

This was his eleventh operation taken from the operational record books.

their aircraft was shot down by a German nightfighter crashing near the village of Mauschendorf, Germany.

Onsite investigation is being conducted by Toni Schmidt, a retired German engineer who lives near the crash site. The two found each other on the internet discovering that each was researching the same event.

It's hoped plans can be put in place to produce and unveil a memorial plaque at the crash site, with a representative of each family member in attendance.

In 2019, we passed the 75th anniversary of that night on what's been called the biggest single air mission of World War II, when Roy and two of his crew mates entered eternity. My uncle, Rear Gunner Sergeant Roy Frederick Thibedeau along with Mid Upper Gunner Sergeant Donald Leslie Sehlin of Millet, Alberta, and Navigator Sergeant Dennis Alfred (Chas) Chaston of Coventry, England made the ultimate sacrifice. Their four other crew mates were able to parachute and ultimately became prisoners of war. Remembering them and all the others who served.

The night fighter that attacked P/O Thibedeau’s aircraft EE174 VN-A. Here’s an excerpt taken from the losses database of the International Bomber Command Centre (IBCC): “Aircraft took off from Skellingthorpe at 2207 hrs detailed to attack targets in Nurnberg. The aircraft was shot down by a night fighter which came upon the Lancaster during its outbound journey. Aircraft  claimed as probably shot down by Uffz Bruno Rupp of 4./NJG3 North of Bamburg at 0108 hrs”.

In this instance, Rupp records this as his second claim of that night and his eighth to that date. The IBCC adds that he was 24 years of age and was flying a Schrage Musik equipped Ju 88. He survived the war having achieved 16 kills.

We are grateful to Roy Thibedeau's nephew Art Osborne for details of his Uncle. We also acknowledge information from the Interntional Bomber Command Centre, Digital Archives and William Chorley's Bomber Command Losses.