Memorial to W4769 at Wieringerwerf

This organisation in Holland was set up to remember all the aircarft that came down in this region. One such aircraft was Avro lancaster Mk1 W4769. 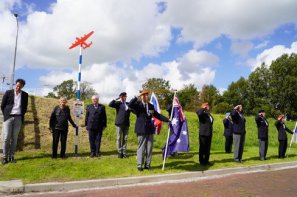 In the Sunday evening of 3 January 1943, English Lancaster bomber took off from RAF Syerston on its way to Kruppfabrieken in Essen. The crewmembers were led by the young but experienced pilot Harry Bird.

This dark night pilot Bird and his crew members flew together with 3 Mosquito and 19 Lancaster bombers to Germany. The Lancaster did not return that night, but it exploded high in the sky at 19.40h. To this day the cause of the explosion is unknown. All crewmembers died. They are buried at the Military Honour cemetery in Huisduinen. After the war they are reburied at the British Commonwealth War Grave Cemetery near Bergen op Zoom.

A private unveiling of this new remembrance post was held on the 6th of February 2021, to honour the request of the family of one of the crew members. Unfortunately, no guest are allowed due to the strict COVID-19 regulations

On the 6th of February the board members placed the information panel on the remembrance post. A moment of silence was held to remember the 7 heroes.

The event was recorded for the local media, although not in English it can be seen here; https://www.nhnieuws.nl/nieuws/280462/ontplofte-britse-bommenwerper-wo2-herdacht 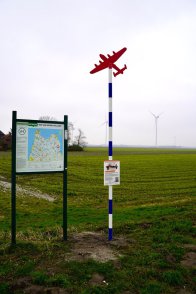 This memorail post is the 5th of such posts to be rected in memory of the crews that came down in the region.

The organisation continues to erect such posts as the research continues into these crashes.

You can see the web site here; EN | shhk.nl