On the night of 4/5 September 1942, Lancaster R5682 took off at 00.25 hrs for an operation to attack the Focke Wulfe works at Bremen. He aircraft was Initially hit by flak and then was finished off by Hptm Helmut Lent Stab II/NJG2 - 4,700m at 0251 hrs. Crashed near Wartena 9km South East of Leeuwarden.

When the aircraft was hit five of the crew managed to bail out, but it was thought that Joslin and Cooper went down with aircraft. In addition, it would appear that May’s parachute failed, and he was not found for some time after the crash. A funeral was held for Joslin and later for May, they are buried in different cemeteries. 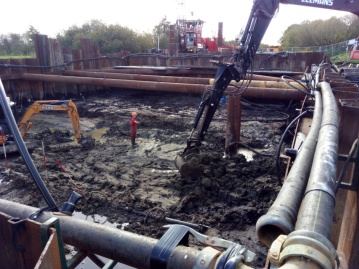 As part of the plans of the Friesian government and in conjunction with Leuwarden to clean up what was polluted waterway plans were made to recover the remains of R5682, and to find Cooper the rear gunner, the only crew member missing.

When to aircraft was hit it was thought that it went in at a shallow angle, however discovery of the wreckage revealed that it had gone in at a very steep angle due to the nature of the wreckage found.

The recovery was carried out by Leemans Specialwerken and the project co-ordinator for them was Evander Broekman.

The method of recovery was to build a Coffer Dam and drain the water from inside the dam. This done excavation of the site was done with great care so as not to destroy any evidence. 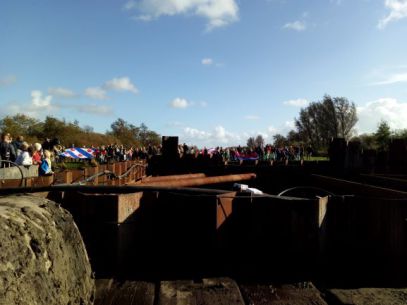 An event was held at the site to remember the crew and families from the crew were invited to a ceremony on the site to view the items recovered. Three members of our association were invited to the ceremony to represent the association accompanied by their wives, namely Neil & Carole Cheeseman, Pete & Barbara Small and Mike & Pam Connock. This was over the 3rd to 5th October 2017. This was accompanied by a fly past of the BBMF Lancaster and two F16’s of the Dutch Air Force 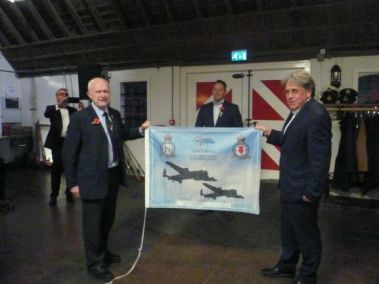 A banner commemoratinh the centenary of No.50 and No.61 squadrons was presented at the reception

Here's where you can enter in text. Feel free to edit, move, delete or add a different page element. 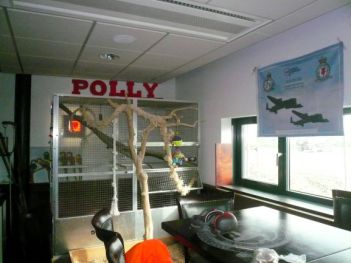 During the weekend, all those present were invited to visit the Dutch Air Force base at Leeuwarden, which during the war was home to the Luftwaffe. The base was home to 632 and 633 squadrons flying F16's. 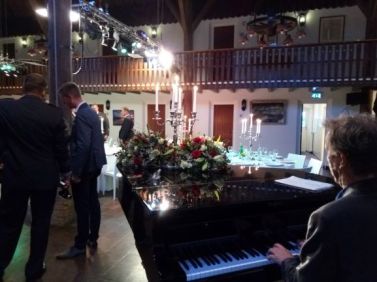 A dinner was held in a restaurant close to the site of the excavation. 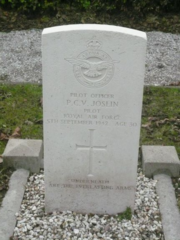 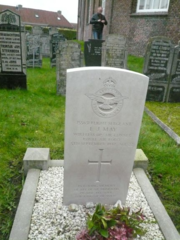 Visits were made to the two graves of Pilot Officer P C V Joslin and Flight Sergeant E J May who were buried in different cemeteries. 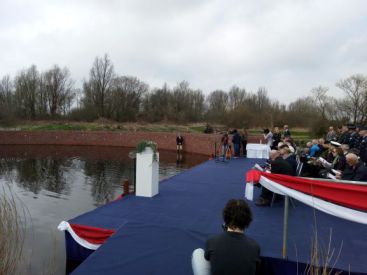 The next plan for the people of Leuwarden was to build a memorial, this was designed to be built from similar brick to that used at the base from which it flew from. The memorial itself is the length of the Lancasters wing span and has 270 holes in the wall, representing the number of aircraft that flew on the operation to Bremen. Within the walls there were 13 time capsules representing the number of aircraft that failed to return. The capsules were presented to be inserted by family members of the crew. 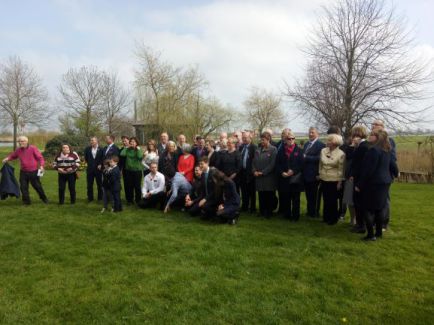 Relatives of the crew gather together for a phot shoot. Some from as far away as Canada, the family of J F Cooper and P A Bridgeman. 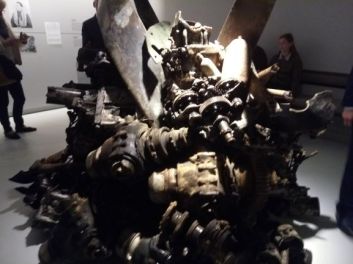 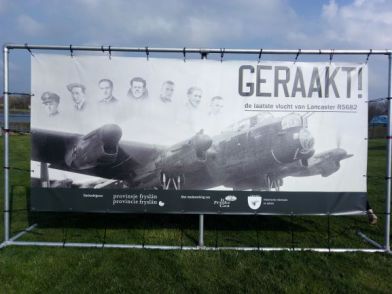 The sign erected outside the museum to commemorate the Lancaster.

All the previous visitors were invited back for the ceremony and the association was on this occasion represented by Neil Cheeseman, Peter Small and Mike Connock. On this occasion the visitors were presented with a figure of a swallow made from the remains of the Lancaster that was excavated.