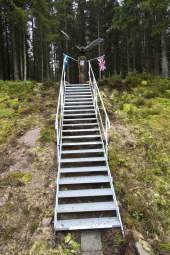 Now it is in place – the new, wider stairs at the memorial dedicated to the Lancaster of 50 sq . that was shot down at Hojalen, Vittsjo, east of Helsingborg, Sweden, in august 1944.

At the same time the memorial, that consists of a bent propeller from the plane, was given a new podium. 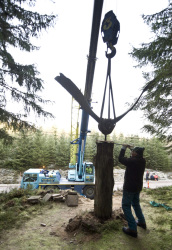 One of the planes propellers was taken care of by locals and thanks to the owner of the nearby saw-mill, Bengt Svensson, it was later developed into a memorial on a podium formed of an oak-log. A kopper-plate, stating the names of the the crew, was also mounted on the log.

This was in 1975 and over the years the memorial has become a cherised and important place for many visitors from Britain and elsewhere. And every year , on Poppy-Day, crosses are placed placed at the actual crash-site a bit from the memorial. 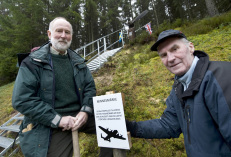 Since the memorial was erected  time has taken its toll on the digged-out steps in the sloop leading up to the propeller. The site has been difficult to reach for older people and the oak-log itself has been badly weathered. This came to the eye of de Gourét Lithcfield, a man  of Scottish orign but living in the neighbourhood. He visits the memorial and the crash-site every now and then and stresses its importance.

He therefore took the decision of paying for a proper stairs, well suited for comfortable access to the memorial. He also initiated the podium to be renewed.

All the work was done by volonteers and both concrete, mobile-crane and transportation was  supported free of charge by local firms.

The final touch of the work was set when Bengt Svensson and de Gourét Litchfield cooperated in placing an information-plate next to the new stairs.

It was just over 11 o´clock in the eveneing of the 29 august 1944 that Lancaster Mk1 (ED 588 VN-G) of 50 sq Skellingsthorpe, as part of a raid destinated for Koenigsberg, was shot down by a German nightfighter.

The Lancaster still had its bombload on board and as it came down in the forest of Hojalen, near the farm of Harald Svenssons, it was totally destroyed in a explosion that was heard of several miles from the crash-site.

Lancaster EDD588 VN-G and her crew has,  with  this,  got a  dignified memorial that will stand for long and  one that will be of great importance for the Vittsjo/Hojalen neighbourhood.