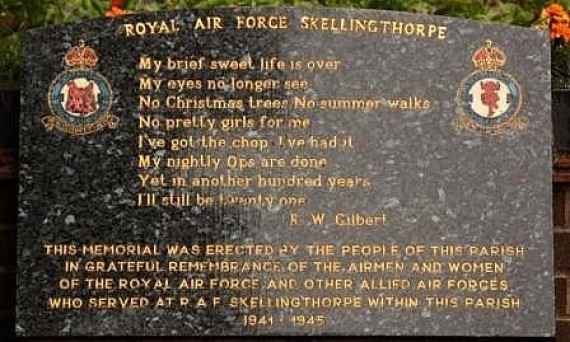 The plaque at the Skellingthorpe memorial 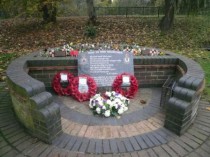 The Skellingthorpe memorial was the brainchild of Peter Small, a Skellingthorpe man born and bred. He took his idea to the then Parish Council Chairman Pauline Harley and she was totally committed to the idea. It was put to the Council and accepted with the site allocated in front of the Community Centre. The memorial was adapted from one of the flower beds by Dave Butler a local builder. The inscription on the plaque was researched by Peter Small and he found a poem in one of his many RAF History books entitled "Requiem to a Rear Gunner". The poem was written by Reg Gilbert himself a rear gunner, and was in memory of his brother who died in the war who was also a Rear Gunner. The verse is taken from this poem and reads;

"My brief sweet life is over

My eyes no longer see

No christmas treees no summer walks

No pretty girls for me

I've got the chop I've had it

My nightly ops are done

Yet in another hundred years

I'll still be twenty one"