I would like to thank Sgt Morrison's nephew, David Geddes. for supplying the details of this unveiling. 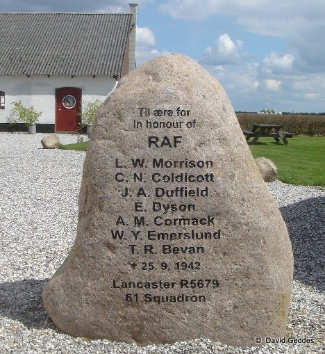 Photo credit - Anders Straarup - http://www.airmen.dk/p114m-e.htm This is the Memorial Stone erected in the courtyard of the Gronhojkro. The space kindly made available by Gregers Laigaard. The RAF Museum dedicated to the mission and the crew is adjacent to this stone- also kindly made available by Gregers. The formal ceremony of unveiling took place on 25 May 2013,  with perhaps 250 family members, onlookers and participants. The stone was donated and transported free of charge by Soren Nielson.

Standards at the Agricultural Museum.

People gather at the flagpole and say Hello.

Wreaths and flowers placed nearby.

The missing wing man formation -  4x Danish Airforce T-17 trainer aircraft make 2 fly-pasts. The first over flight sees the wing man break away signifying a lost plane and crew. In the second fly past the plane is reunited with the formation to signify that there is resurrection, whilst duty continues, and others take their place.

Speeches by the Air Force Chaplain, Anders Straarup  and David Geddes about the memorial.

All of us walk to the road and face the stone which is covered by the Dannebrog - the Danish flag.

The nearest part of the road will be sealed off. The stone will be unveiled by  Laura Laigaard (13) granddaughter of the original eye witness.

Wreaths and flowers are laid in the same order as the speeches. The standards are lowered every time.

Anders Straarup introduces the Act of Remembrance read by David Geddes. The "Ode of Remembrance" is an ode taken from Laurence Binyon's  poem, "For the Fallen", which was first published in The London Times in September 1914. Piper plays The Amazing Grace.

Back on the lawn.

Air Force Chaplain: The Lord’s Prayer, Blessing. Song, all of us: Altid frejdig.

Gregers Laigaard: Invitation to a coffee table in the Grønhøj Village Hall. The standards are carried out. Piper plays The Sleeping Song.

Gregers is the hotel owner of the 'Gronhojkro' - the traditional inn.  His mother, from the same building, was the first eye witness account that I found of the air battle and crash. This courtesy of a Danish colleague doing a web search in Danish language. At that point I knew that the story given to the Morrison family in wartime did not relate in any way to the truth, and my research began.

There is no part of the mission events and interceptions  from either British or the German side that I now do not know and understand, other than,  why, when Military Intelligence knew of the German Radar at Randers and the NJG3 nightfighter station at Karup Grove, was the mission sent directly over the radar.

We have 6 eye witness accounts from folk alive at the time including statements from the farming folk whose buildings were hit by canon and machinegun fire from both planes.   Some personal property has been retrieved from the crash site. Local newspapers have been very helpful in helping our research. Danish TV and radio will film the unveiling and carry out interviews. The Danes, for whom liberation remains incalculably important, are very diligent and committed to the 400 RAF planes with crew that were lost over or near Denmark . Such commemorations are still relatively frequent as inquisitive researchers, generally family, like myself, find that there is much that was never known or told at the time.

A huge volume of interesting collateral information has accumulated which I shall put into a self publish book after the ceremonies in May. I shall also visit the Frederikshaven Kirke and CWGC cemetery with its  Portland stone memorial cross. This is 2 hours drive north of Gronhoj. I expect to lay a wreath on behalf of all the crew families.

I have placed more photographs and will do so again on