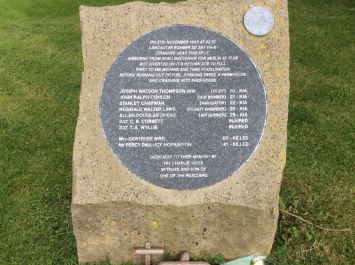 This memorial at Pocklington remembers the crew of Lancaster ED393, VN-K. The aircraft had taken off from Skellingthorpe on a raid to Berlin

Aircraft took off at 1708hrs. Diverted to Melbourne due to thick fog over all Lincolnshire bases, then re-diverted to Pocklington and whilst in the circuit the aircraft ran out of fuel, clipping trees at the rear of the Wellington Oak pub. It careered out of control, colliding with the roof of a house next door, before crossing the road and colliding with the upstairs of Ings House adjacent to the canal, in the village of Canal Head, 4 miles NW of Market Weighton, Yorkshire. In addition to the aircrew, 2 civilians were killed (Mr Percy Paulucey Hopkinson -an itinerant worker from Sheffield who was employed at a local saw mill- and Mrs Gertrude Bird)