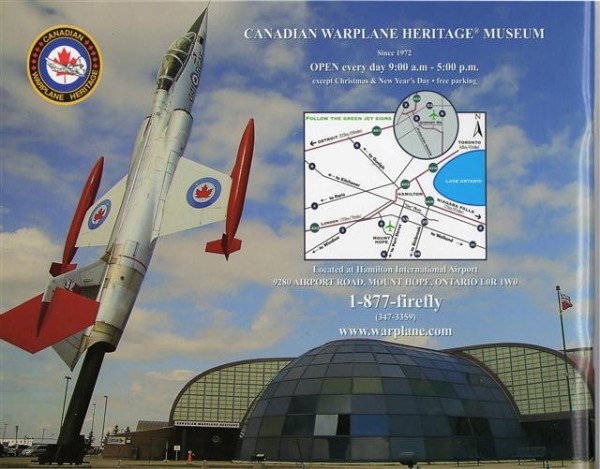 The Canadian Warplane Heritage Museum's mandate is to preserve, maintain, and display a collection of aircraft that are of significant importance to Canada's aviation history. Wherever possible these aircraft are restored and maintained in flying condition. The fact that a significant number of their current collection of over forty-five aircraft are able to fly, makes the museum unique in Canada, if not in North America. 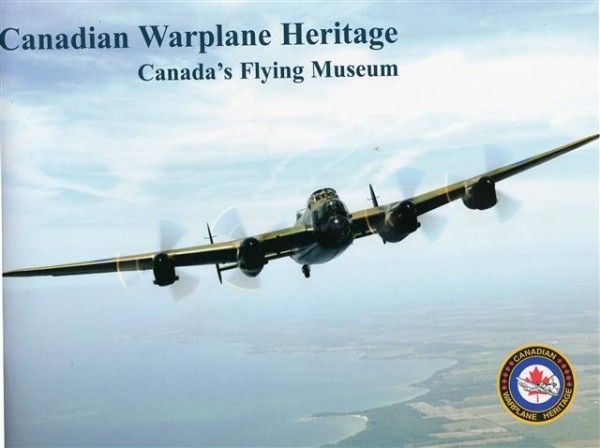 The VR-A markings commemorate the Lancaster on which P/O Andrew Mynarski (RCAF) won a posthumous Victoria Cross on 12 June 1944. 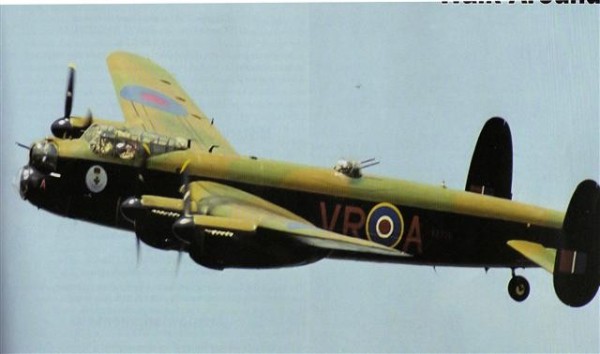 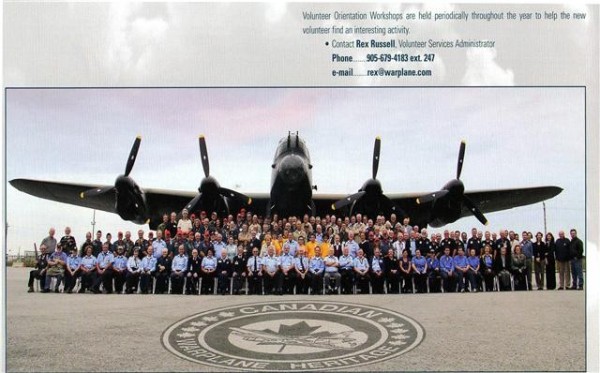 During a two weeks holiday with relatives who live in Grimsby, Ontario, Canada, James and Eunice were taken to Parry Sound for a cruise on the Island Queen around the 30,000 islands. During breakfast, after an overnight stay in motel, a Canadian couple commented on our English accent, they told us that they had emigrated from England to Canada some 16 years ago, during conversation the man said "If you get a chance you must visit the Warplane Heritage Museum at Mount Hope near Hamilton", I replied "I'm going there on Saturday, my nephew has contacted the museum and told them that he was bringing a WW11 rear gunner. The staff want to meet me". With that the man broke away to make a phone call. On his return he said "I am a trustee of the Heritage Museum, when you get there ask to see Rick Rickard, he is one of the head people at the centre, he will arrange for you to be taken on a Royal Tour". "Gosh what a bit of luck " I thought.

My nephew David Jepson used his car to convey us the 20 miles or so to Mount Hope, his wife, Rebecca, and their two daughters accompanied us. 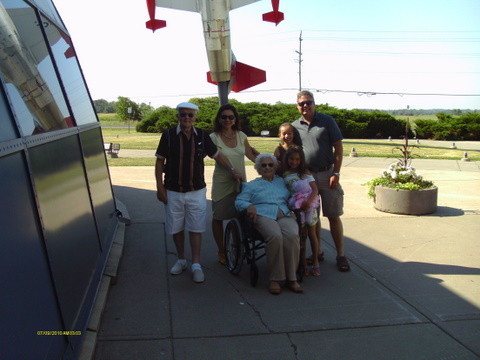 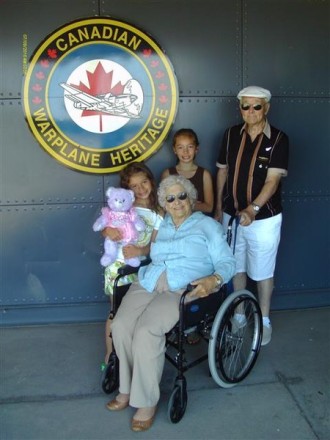 James and Eunice Flowers with two young relatives outside the museum.

After mentioning Rick Rickard's name at reception we were chaparoned around the museum. When we reached the Lancaster it was being worked on by a number of ground staff, immediately all work stopped and we were surrounded by staff wanting to talk to me. It seemed as though every one of them had a relative who had served in Bomber Command during WW11. It wasn't long before we were inside the Lanc for a closer inspection. How my relatives loved it. 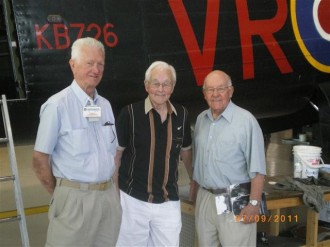 L to R. Richard Pulley, one of the museum's Lancaster pilot's. James and Trevor Meldrum, a WAG who spent most of WW11 flying in Catalina's on submarine patrol from bases in Greenland, Newfoundland and Iceland 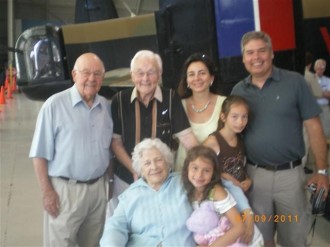 David and Rebecca Jepson and L to R. Trevor, self, Eunice with nephew heir two daughters 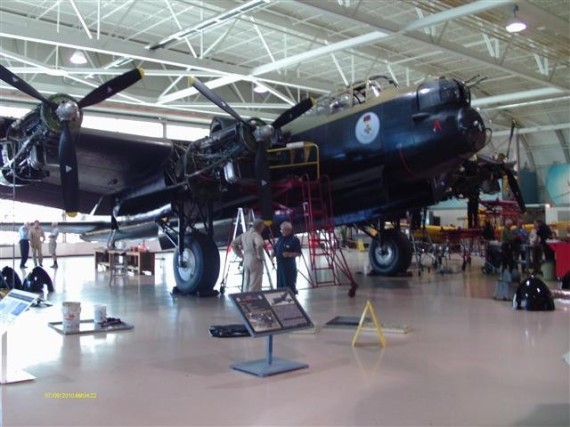 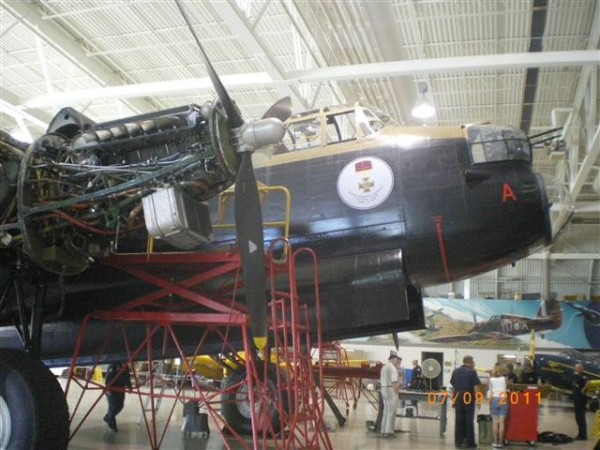 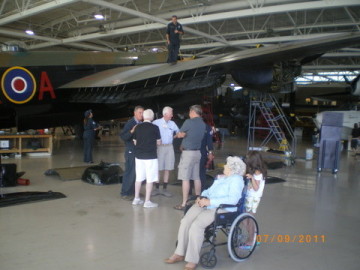 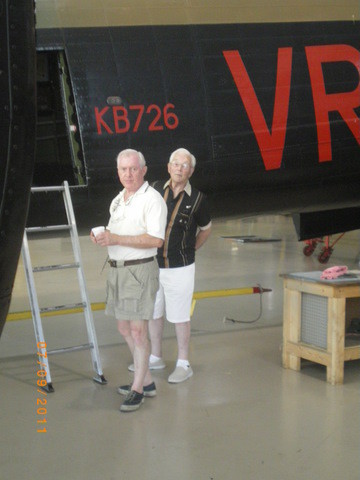 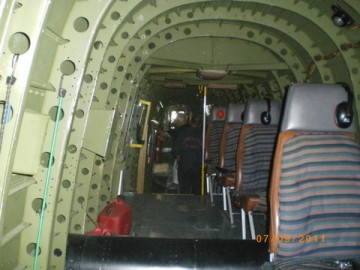 2,000 Canadian dollars a seat. Trip includes flight over the Falls.

"Come next wednesday and we will take you up" they said.

Sadly I could not take their offer up. 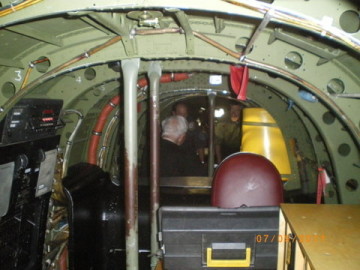 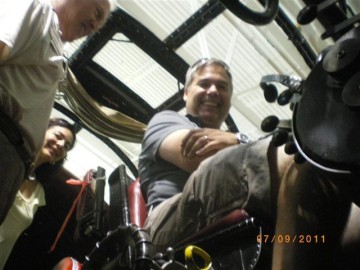 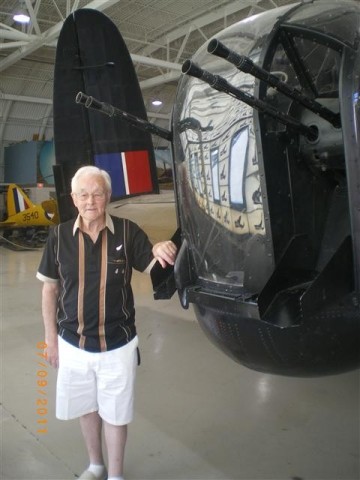 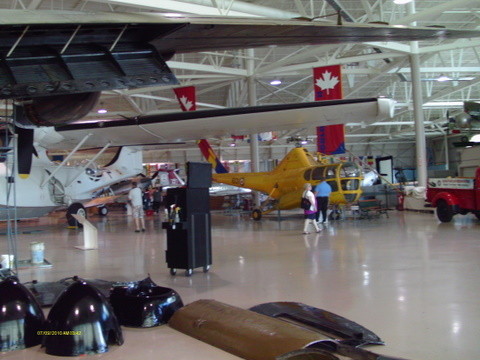 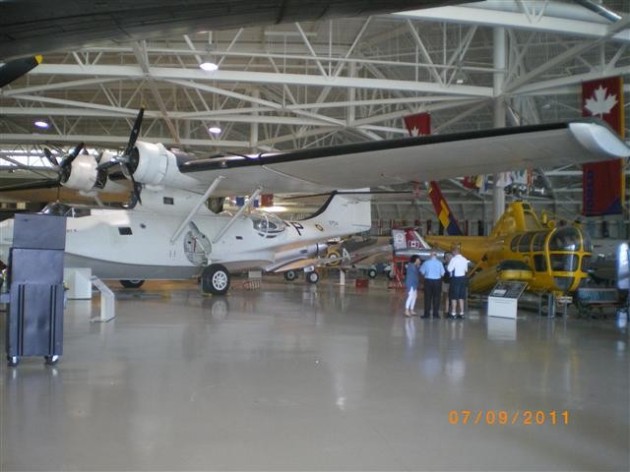 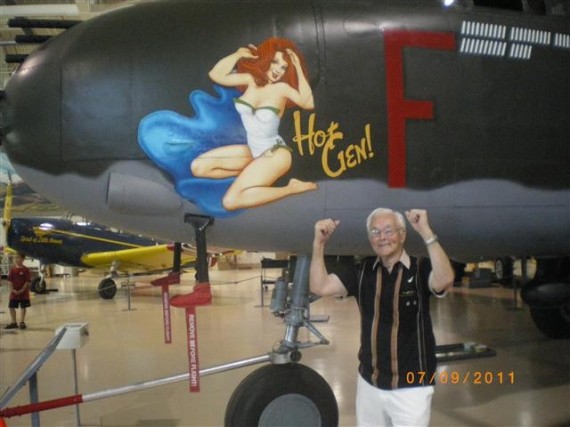 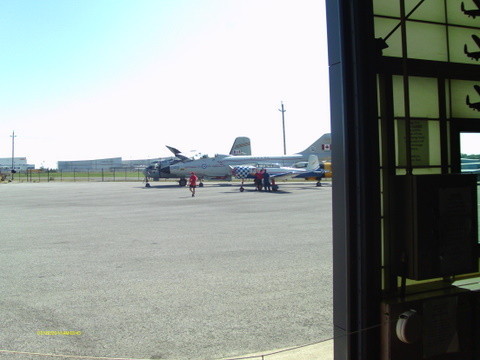 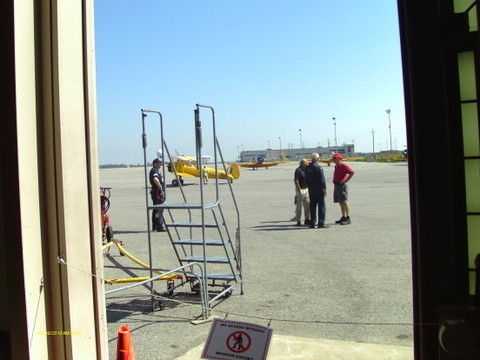 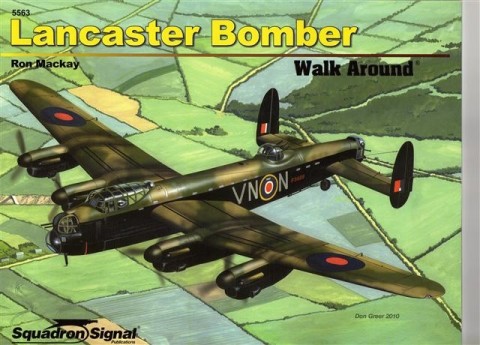 After we left Rebecca handed me some museum books which she had bought for me.

To my surprise one of them had a picture of VN-N.

I would have loved to have told them that I flew a number of times in VN-N. Not ofcourse this particular aircraft as this one was "written off", following a crash landing after a "gardening"(mine laying" operation on the 19th September 1942

This is a copy of the picture on the front of that museum booklet.

What a wonderful Warplane Heritage Museum the Canadians have developed. They have so many wonderful WW11 aircraft in mint condition. Whilst we were there, there was a constant stream of excited people being taken for trips in them.

I can't speak too highly about the dedicated enthusiastic staff who work there. All are volunteers. Obviously it is a labour of love.