The Victoria Cross was awarded to Bill Reid

William Reid was born in Bailleston, near Glasgow, on 21 December 1921 the son of a blacksmith. He was educated at Swinton Primary School and Coatbridge Higher Grade School and studied metalurgy for a time, but then applied to join the RAF. After training in Canada, he received his wings and was a sergeant when he was commissioned as a Pilot Officer on probation in the Royal Air Force Volunteer Reserve on 19 June 1942. He then trained on twin-engined Airspeed Oxfords at Little Rissington before moving to the Operational Training Unit at RAF North Luffenham. There, his skill as a pilot led to his being selected as an instructor, flying the Vickers Wellington, albeit with the promise of a posting to a Avro Lancaster heavy bomber unit. He was promoted to Flying Officer on 19 December 1942.

The posting did not materialise until July 1943, when he was sent to 1654 Conversion Unit, RAF Wigsley, near Newark-on-Trent, where he flew his first operational mission as second pilot, in a lancaster of 9 Squadron, in a raid on Monchengladbach. In September he was posted to 61 Squadron at RAF Syerston, Newark, to commence Lancaster bombing operations, and he flew seven sorties to various German cities before the raid on Dusseldorf. 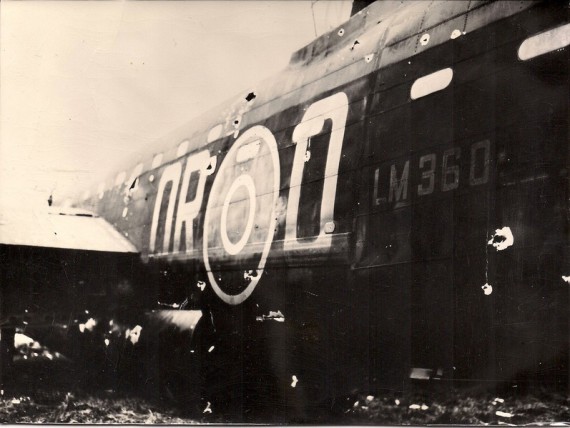 Reid was a 21-year-old acting flight lieutenant serving in 61 Squadron when he took part in the raid on Dusseldorf in Germany which led to the award of his VC.

On the night of 3rd November 1943, on the way to Düsseldorf, the windscreen of Flight Lieutenant Reid's Lancaster (serial LM360) was shattered by fire from a Messerschmitt Bf 110 with the gun turrets and cockpit badly damaged, saying nothing of his multiple injuries, he continued on his mission and soon afterwards the bomber was attacked again by a Focke-Wulf FW 190. His navigator was killed and the wireless operator fatally wounded. He was wounded again,as was the flight engineer, whilst the Lancaster received more serious damage. The starboard part of the tailplane had been lost. He decided to carry on, rather than turn back, no one else on board could have flown the plane in a straight line, let alone with all the damage sustained. Reid modestly claimed that his reason for pressing on was that turning back would have involved flying through or across the following bomber stream, with a real danger of a mid air collision.

Pressing on to his target, Reid released the bombs, then set course for home. On the way back to Syerston, he saw the searchlights of RAF Shipdham, a USAAF base in Norfolk.

Despite being wounded and suffering from loss of blood, Reid succeeded in landing his plane - though the undercarriage collapsed and the aircraft slid along the runway. The wireless operator died in Shipdham's medical centre but the rest of the crew survived.

The KING has been graciously pleased to confer the VICTORIA CROSS on the undermentioned officer in recognition of most conspicuous bravery: —

On the night of November 3rd, 1943, Flight Lieutenant Reid was pilot and captain of a Lancaster aircraft detailed to attack Dusseldorf.

Shortly after crossing the Dutch coast, the pilot's windscreen was shattered by fire from a Messerschmitt 110. Owing to a failure in the heating circuit, the rear gunner's hands were too cold for him to open fire immediately or to operate his microphone and so give warning of danger; but after a brief delay he managed to return the Messerschmitt's fire and it was driven off.

During the fight with the Messerschmitt, Flight Lieutenant Reid was wounded in the head, shoulders and hands. The elevator trimming tabs of the aircraft were damaged and it became difficult to control. The rear turret, too, was badly damaged and the Communications system and compasses were put out of action. Flight Lieutenant Reid ascertained that his crew were unscathed and, saying nothing about his own injuries, he continued his mission.

Soon afterwards, the Lancaster was attacked by a Focke Wulf 190. This time, the enemy's fire raked the bomber from stem to stern. The rear gunner replied with his only serviceable gun but the state of his turret made accurate aiming impossible. The navigator was killed and the wireless operator fatally injured. The mid-upper turret was hit and the oxygen system put out of action. Flight Lieutenant Reid was again wounded and the flight engineer, though hit in the forearm, supplied him with oxygen from a portable supply.

Flight Lieutenant Reid refused to be turned from his objective and Dusseldorf was reached some 50 minutes later. He had memorised his course to the target and had continued in such a normal manner that the bomb-aimer, who was cut off by the failure of the communications system, knew nothing of his captain's injuries or of the casualties to his comrades. Photographs show that, when the bombs were released, the aircraft was right over the centre of the target.

Steering by the pole star and the moon, Flight Lieutenant Reid then set course for home. He was growing weak from loss of blood. The emergency oxygen supply had given out. With the windscreen shattered, the cold was intense. He lapsed into semiconsciousness. The flight engineer, with some help from the bomb-aimer, kept the Lancaster in the air despite heavy anti-aircraft fire over the Dutch coast.

The North Sea crossing was accomplished. An airfield was sighted. The captain revived, resumed control and made ready to land. Ground mist partially obscured the runway lights. The captain was also much bothered by blood from his head wound getting into his eyes. But he made a safe landing although one leg of the damaged undercarriage collapsed when the load came on.

Wounded in two attacks, without oxygen, suffering severely from cold, his navigator dead, his wireless operator fatally wounded, his aircraft crippled and defenceless, Flight Lieutenant Reid showed superb courage and leadership in penetrating a further 200 miles into enemy territory to attack one of the most strongly defended targets in Germany, every additional mile increasing the hazards of the long and perilous journey home. His tenacity and devotion to duty were beyond praise.

After a period in hospital, Reid went to C Flight, 617 (Dambuster) Squadron at RAF Woodhall Spa in January 1944 and flew sorties to various targets in France. He was promoted to substantive Flight Lieutenant on 14 June 1944.

On 31 July 1944, 617 Squadron was linked with 9 Squadron for a "Tallboy" deep penetration bomb attack on a V weapon storage dump at Rilly-la-Montagne, near Rheims. As Reid, flying in Lancaster MkI ME557 KC-S, released his bomb ove the target at 12,000 ft, he felt his aircraft shudder under the impact of a bomb dropped by another Lancaster 6000 ft above. The bomb ploughed through his aeroplane's fuselage, severing all controls and cables and fatally weakening its structure, and Reid gave the order to bail out.

As members of his crew scrambled out, the plane went into a dive, pinning Reid to his seat. Reaching overhead, he managed to release the escape hatch panel and struggled out just as the Lancaster broke in two. He landed heavily by parachute, breaking his arm in the fall. Within an hour he was captured by a German patrol and taken prisoner. After various transfers, he ended the war in Stalag III - a prisoner of war camp at Luckenwalde, west of Berlin

Reid was demobilised in 1946 and resumed his studies, first at the University of Glasgow and later at the West of Scotland Agricultural College. After graduating from the University of Glasgow in 1949, he went on a travelling scholarship for six months, studying agriculture in India, Australia, New Zealand, America and Canada. He retained a reserve commission until 15 January 1949.

In 1950, he became an agricultural adviser to the MacRobert Trust, Douneside. From 1959 to his retirement in 1981, he was an adviser to a firm of animal feed manufacturers.

Reid is interviewed and provides a vivid description of the mission for which he was awarded the Victoria Cross in episode 12, "Whirlwind - Bombing Germany (September 1939-April 1944)", of the acclaimed British documentary television series, The World at War.

Reid married Violet Campbell Gallagher, a daughter of William Gallagher, sports editor of the Glasgow Daily Record in 1952. She was reportedly completely unaware that he was a VC holder until they were married.

William Reid died at the age of 79 on 28 November 2001, survived by his wife and their two children. On 19 November 2009, his VC was sold at an auction by medal specialists Spink. It went to an anonymous bidder for £384,000, a record for a VC awarded to someone from the United Kingdom.